Following our earlier coverage of the hardware announcements at Google's I/O event, this post is a wrap-up of the big software features and products that Google unveiled on stage today.

Not only has Google committed to fixing some problems that have been a part of the Android "experience" since the first version of the mobile operating system shipped (unresponsiveness), it also moved to help developers work with the platform and made a commitment to becoming a genuine content company.

Android 4.1, aka Jelly Bean, was announced alongside the Nexus 7. Launching as an over-the-air upgrade for Galaxy Nexus, Xoom, and Nexus S owners in mid-July, many of Jelly Bean's features appear to be Google's attempt to improve the responsiveness of Android devices. The company actually had two Galaxy Nexus phones – one with Ice Cream Sandwich, the previous version of Android, and the other with Jelly Bean – running side by side to display Jelly Bean's "buttery smooth" animations and responsiveness.

Jelly Bean is an incremental (Read: "incremental," not "shitty," commenters) upgrade to Android, but it seems to have fixed some of the problems that have plagued Google's mobile OS since its inception. Google was quiet on the upgrade path for non-Nexus/Motorola Xoom owners, but we're slightly hopeful that the process will be smoother than the transition to Ice Cream Sandwich last year. 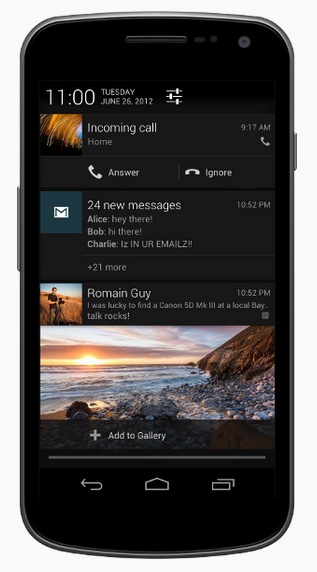 One of the standout features of Jelly Bean is the new, smart notification tray. When a notification is the top item within the tray, it expands and offers a set of quick actions that the user can initiate with a single tap.

Say, for example, that I missed a call from my fiancée. With Jelly Bean, I would see that notification and could choose to either call her back or send her a "canned" (pre-prepared) response. While this feature might not seem like a big deal, it has the potential to streamline the "Check notification, jump to app, do one thing, jump back to notification" workflow that smartphones currently force users to follow every time they want to respond to something.

Jelly Bean will also have more accessibility features, including a new gesture-based interaction scheme for blind users and system support for 17 new languages.

The company also improved its Voice Search in general, as it seemed faster and more accurate during the company's presentation. The presenter did have to lean in fairly close to the phone in order to get Voice Search to work, but that may have been a side effect of being in a conference room filled with 5,000 developers and journalists.

What makes the improved Voice Search really exciting is the introduction of Google Now. By integrating with Google's Knowledge Graph, the company's effort to build a database that attaches words with identifiable objects, Google will Now (get it?) display "cards" of information above the typical URL-heavy search results. Google Now integrates with everything from Calendar and Maps to information about sports and flights and is worthy of a post on its own.

Google's re-branded Android Market saw a number of improvements today that solidified Google's status as a content company. The first announcement was that customers can now purchase movies from Google Play; they were previously limited to renting movies, so this change could help with a cost versus benefit decision when it comes to choosing to watch a movie through iTunes or Google Play.

Google Play now offers magazines for sale, and Google has partnered with Conde Nast and other publishing companies to offer a wide selection of glossies for Android owners' perusal. Despite Apple's lead in this area, Google's version of magazines appears to be even better than Cupertino's, offering a tablet-optimized view that removes all the "crust" from the page, as well as smart, interactive covers that users can tap to be taken to a related story.

Perhaps no other area of I/O demonstrated Google's commitment to improving software alongside hardware as much as these Google Play improvements. The company actually stopped in the middle of announcing the new magazines to introduce the Nexus 7 tablet, and the Nexus Q would have been hamstrung, if users couldn't access a large number of videos through the device.*

Google has been hard at work trying to improve developers' workflow, adding a number of features that might make consumers scratch their heads in confusion while developers jump up and down with glee.

The first of these changes is the new Smart Updates feature. With the current Google Play store, users have to download the entire APK (the file that Android applications are built from) each time an app is updated. With Smart Updates, users only have to download the parts of the code that have been changed. This should improve the users' experience (and make wireless carriers happy).

Google also announced that developers will have access to Google Cloud Messaging, which aims to cut down on the amount of data that users have to use to retrieve information. More will be revealed about the feature during this week's developer workshops, and Google has said that developers can access Cloud Messaging with no quotas, for free.

Google's I/O event was remarkably similar to Microsoft's Los Angeles event from last week. Both companies, which have primarily worked with software, are pushing themselves to make hardware and ensure that every piece of a machine works together as a cohesive whole.

With a large number of divisions and a dizzying number of products, coordinating the development and release of hardware and software must be a logistical nightmare inside Google. If today's demos are anything to go off, however, the effort might just be worth it.