The latest investment round was led by New Enterprise Associates (NEA) with participation from Revolution Ventures. Each investor has previous success in the education market and, critical to its founders, buy into the vision of BenchPrep as a consumer-facing brand position to change the way educational content is distributed and consumed.

“Investing in technology to improve education is very important to NEA – and it’s a large, $1 trillion plus market,” said NEA general partner and new member of BenchPrep's board of directors Peter Barris.

Gone are the days of digging through the dusty back room shelves of a college bookstore looking for a used copy of this year’s overpriced course materials. With currently more than 100 courses from 20-plus publishers, BenchPrep is already one of the biggest digital learning platforms around. The company plans to use the financing to expand to over 500 courses by year’s end and targets growth to one million students over the next 12 months.

BenchPrep is not a content creator, but rather licenses existing content from industry leading publishers such as McGraw Hill, Princeton Review, and others. The company then creates interactive, personalized courses that are both more comprehensive and more interesting than a traditional textbook.

“Our core competency is our ability to take existing standard content and create an interactive personalized course to be published across multiple devices in less than 24 hours,” says its co-founder Ashish Rangnekar. This process is approximately 80 percent automated, with the remaining 20 percent being primarily quality control and final meta-tagging.

Rangnekar says his company doesn’t need individual subject matter experts in order to create the world’s best content. Instead, they simply work with the best publishers who already employ such experts, piggybacking on their knowledge and leg work.

“Publishers, wary of committing resources to an interactive course development project that requires a specific operating system or device type, are enthusiastically embracing our device-agnostic platform,” says co-founder Ujjwal Gupta. BenchPrep’s courses are available on the desktop web and through native apps for iOS (iPhone and iPad) and Android. 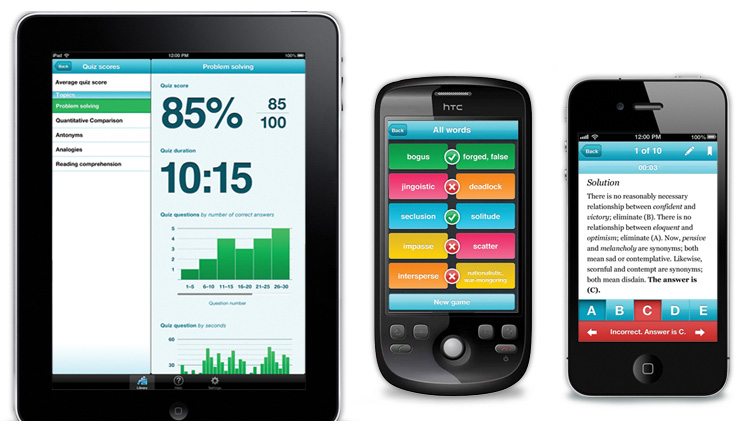 All BenchPrep content is available through a single interface, making the platform its own digital academy. For example, a high school student can download a single app to access study courses for Calculus, Biology, AP English, and the SATs (each purchased separately). More importantly, it offers a seamless experience across devices, meaning a student can pick up on their tablet where they left off on their desktop, including accessing all notes and previous results. Personalized performance analytics help students evaluate their progress and focus on the areas where they need the most help.

The company’s course materials are priced similarly to traditional textbooks, meaning on the order of $50 up to several hundred dollars depending on the subject matter. While two-thirds of its students access their courses on mobile devices, 90 percent of all transactions happen on the Web, says Rangnekar. Although this is supposedly not by design, and courses are available for purchase through all interfaces, the current situation dramatically minimizes the fees paid to platform providers such as Apple.

BenchPrep’s current goal is not to replace textbooks but instead to first disrupt the self-study market of tutors and study aids. This market is where students have the most autonomy in their buying decisions rather with than school mandated textbooks. As the company grows, it hopes to offer multiple choices in each subject category. To facilitate this, BenchPrep plans to roll out an Amazon-like rating and review mechanism over the next next 4-6 weeks.

For publishers, BenchPrep is a “direct to consumer distribution channel” that requires no marketing spend on their part. One key question in the company’s model is how long will these publishers be willing to license their content to a company that increasingly seems like a competitor. Rangnekar answered this, saying:

“We have no intention of getting into the content creation business. We are a distribution platform and we actually help publishers maintain pricing from physical textbook to digital course material. Whereas with traditional ebooks the price point is almost always lower, one of our courses doesn’t look like a book, feel like a book, talk like a book, allowing us to separate its value from that of a book. If a company makes X margin selling their physical textbook through Amazon, we agree to deliver that same exact margin via BenchPrep. More importantly, the student gets a far richer more interactive experience and sees greater value in our courses, something they’re gladly willing to pay for.“

Chicago-based BenchPrep currently has 17 full time employees and an outsourced quality assurance team. The company has raised a total of $8.2 million to date, including $2.2 million in previous financing from Groupon co-founder Erik Lefkofsky’s Lightbank investment firm.

There are other competitors in the space including existing test prep giants such as Kaplan. Also, other startups are tackling the market such as BarMax which is famous for offering one of the most expensive iPad apps of all time. Its $1,000 LSAT prep-course was a relative steal compared to the $4,500 classroom course offered by the likes of Kaplan, but now seems exorbitant in comparison to BenchPrep’s analogous $300 course. Rangnekar compares these previous offerings to monopolies and is hell bent on introducing additional competition and consumer choice to the marketplace.

“At the end of the day, we are trying to solve the problems of the student,” says Rangnekar. “This philosophy hasn’t been implemented for the longest time. Most of the current market consists of institutional products whose customer is the University not the student. We are keeping students as the centerpiece of everything.”