I thought I knew all there was to know about MovieClips. If you asked me to summarize their business, I would have said, “They post short clips of premium Hollywood movies on YouTube and put some ads up next to the content.” But I would have been completely wrong.

Yes, MovieClips is a Top 10 YouTube Network and the best place to watch scenes and trailers from Hollywood movies online. Yes, it’s the fastest growing network on the platform, with more than three billion video views in less than a year. Yes, it has content distribution deals with six major Hollywood studios -- Fox, MGM, Paramount, Sony, Universal, and Warner Brothers. This is all true, and yet it’s also the tip of the iceberg.

What’s lurking beneath the surface is a ten ton block of icy business model that has already sunk the ships of much of the competition (whether they know it or not).

It should have been obvious when MovieClips convinced all the major Hollywood studios to play nice -- no small feat -- that they had plans beyond throwing up a few short movie scenes online and calling it a day. The company has spent the last year building a content and rights management platform to solve a problem the studios didn’t even know they had. Now they’re more entrenched than ever before. 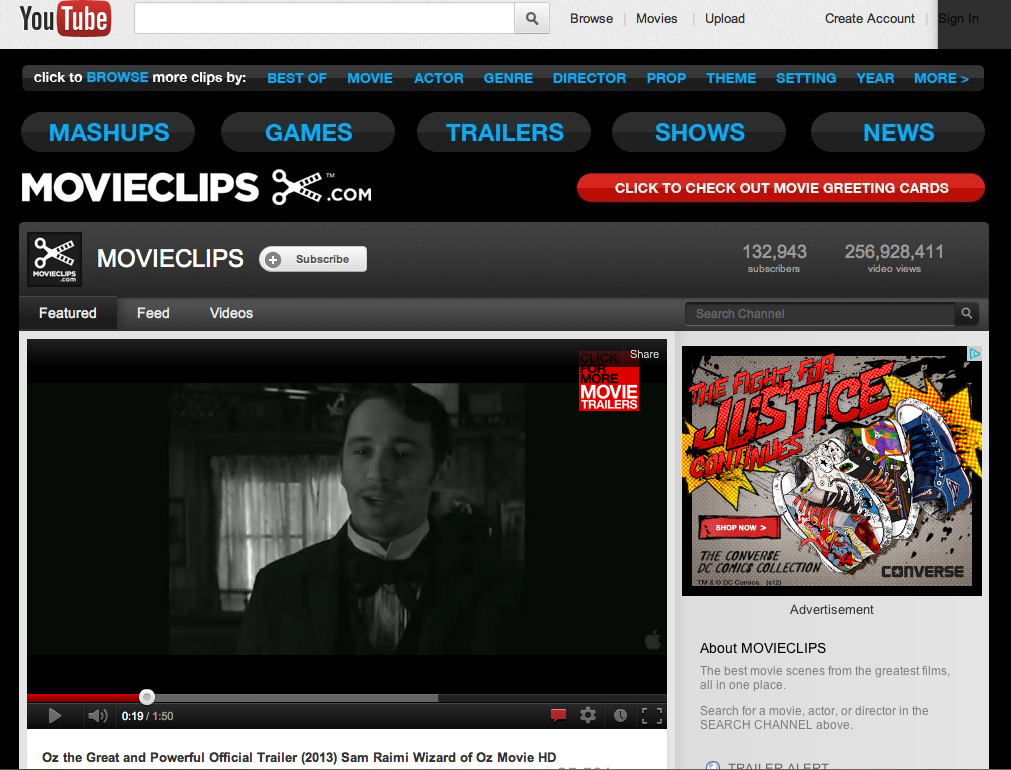 Co-founders Richard Raddon and Zach James have a radical point of view around the debate between what they call “piracy versus passion” and they’ve built the tools to turn this viewpoint into a cash cow. For years, studios have taken the attitude that anyone posting content from their library without prior permission causes them damage and must be stopped. MovieClips, on the other hand, recognizes that most of these cases are evangelists, helping to build a community and drive conversation around premium content.

As great as the average trailer or scene clip is, “it’s like a dish served cold when uploaded by a studio,” says James. “There’s no comparison to the warm, personal recommendation of a user-uploaded and promoted clip (even with the same content).”

The content tagging and monetization tools MovieClips has built are purposed for Hollywood and outclass even what YouTube can offer. The studios can’t get enough of the exponential increase in video views being created. “We’re a technology shop built on top of YouTube,” says co-founder Zach James.

MovieClips rights management platform can leverage two years of metadata accumulated in its databases to scour YouTube and identify fan-uploaded premium content. Each upload is ranked by velocity of views -- a combination of overall popularity and trending growth in viewers -- as well as other factors. Each studio sets its own guidelines about how identified content is to be handled. In most cases, it’s “claimed” in an audience friendly manner where the content remains on the user’s channel and they get credit for all views and comments. Only the advertising revenue generated is redirected to the account of the studio.

So users can upload and share content within their channels and studios get to broaden their reach and increase monetization.  Win, win. And very atypical Hollywood thinking.

After the algorithms have done their work, a real person puts "eyeballs on every video," as the company describes it. The company employs a two step QC process to eliminate errors. The final check is about determining which level of monetization to enable and which tags to apply to maximize advertising rates through contextual targeting. Most impressively, the average piece of content is identified and claimed within 24 hours of posting.

Rather than employing a team of overseas workers to make decisions around this sensitive video content, the work is done in Los Angeles. MovieClips employs a few dozen young Angelenos in a swanky office converted from an underground speakeasy off of Abbot Kinney Blvd in Venice. “Lenny Kravitz performed right here a few years ago,” says James. Very apropos, given the intimate, personal nature of even the most public video content. According to their CEO, this team has gotten so efficient that it now processes 15 times the content per individual per day than when the program was introduced.

MovieClips’ rights management technology has exponentially increased total viewership and monetization of premium Hollywood content on YouTube. Of the 600 million monthly video views MovieClips currently generates -- up from 400 million a month ago and with one billion monthly views predicted by year’s end -- only 20 percent are videos uploaded by MovieClips, with the remaining 80 percent originating from claimed user-uploaded content. Talk about proving a hypothesis.

On top of this, MoveClips has given studios a way to measure cult followings in a way that has never before been possible. In the pre-online world, the measuring stick was DVD sales. For example, while the first Austin Powers movie was a lackluster theatrical release, it was a DVD juggernaut. It was so popular that a sequel was made (despite weak box office returns) and the rest is history. With the DVD market in the dumps, total YouTube views and trending views are the best available measure of audience sentiment. Studios can now measure a wider and more authentic audience than was possible when they were shutting down and alienating every fan wishing to interact with their content.

Beyond the identification and claiming of user-uploaded content, MovieClips has developed and deployed a content tagging platform that has supercharged its engagement numbers (see 50 percent growth in the last month, above). “We’re freaks with the annotation tool,” says James.

This allows the company to serve users endless content by interest. Like car chases? Here are hundreds of the best scenes. Bad guys? All you can ask for. Kisses, dancing, jokes, aliens. You name it, MovieClips can slice and dice their catalog and deliver the very best on any given topic instantly. Users can watch a single scene or all within a category in succession. The post-reel on each piece of content offers a variety related clips which users can click to view instantly. 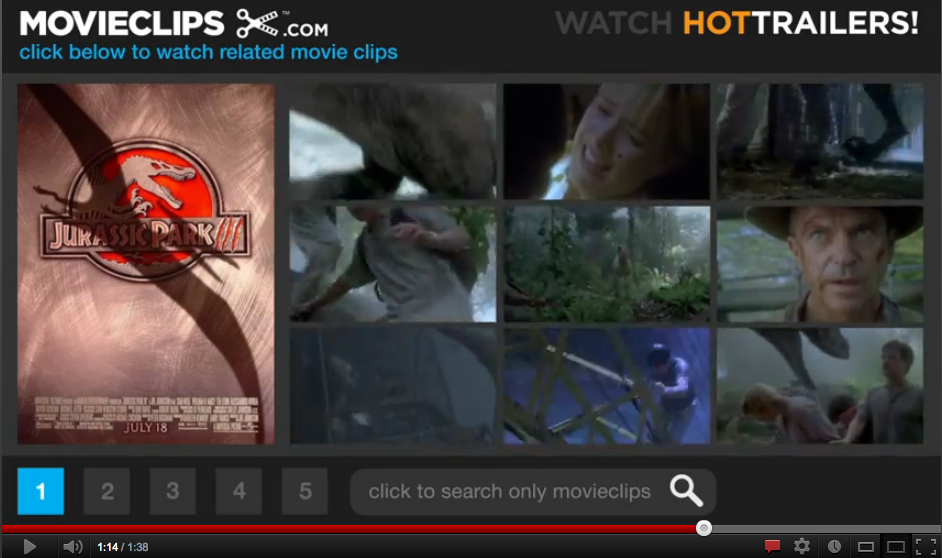 It’s an endless wormhole of preference-driven premium video content which James likened to a “Pandora for video.” Better yet, there are no silos within the MovieClips network. Fox content leads to Warner Brothers content leads to MGM content seamlessly and frictionlessly, mirroring the way the average user’s mind works.

Users can also play a variety of games like “choose your own adventure” and video trivia. In the former, scene snippets from across the MovieClips network are mashed up according to user choices to create new shortform movies. In the latter, users attempt to correctly reassemble a puzzle of short clips from their favorite movie. Without an overarching platform focusing on the needs and wishes of the audience, none of this would have never been been possible.

MovieClips doesn’t charge the studios any type of fee for this service, SaaS or otherwise. In fact, it doesn’t see itself as a vendor or service provider at all. “We love being called a partner,” says James. “It makes us want to invest more in working with the studios and with YouTube.” All monetization comes through a sharing of advertising revenue and because MovieClips supercharges views, the studios are content to continue sharing.

If I sound exceptionally bullish on these guys, it is because I am. It's not every day that a company hides 480 million monthly video views in plain sight and beats YouTube at its own game, monetizing the most valuable video content on the Web.

With the impressive growth of MovieClips’ content network and underlying technology, the company has had little trouble hiring or raising capital. In the last two months, James and co. have hired three senior executives away from other notable technology and content companies. In July of last year, the company completed a $7 million Series B financing, bringing aboard strategic online video investor MK Capital, along with previous investors Shasta Ventures, First Round Capital, Naval Ravikant, Jeff Kearl, Tom McInerney, SoftTech VC, and Aydin Senkut. It is currently operating profitably and has no immediate plans to raise additional funding.

The tools MovieClips delivers are either unavailable or ineffective as provided elsewhere, including from YouTube. More importantly, the trust they’ve earned is not easily duplicatable. It took a startup to cater to the needs of true studio power users. It would seem that the company is so well positioned, so far ahead of the competition, and providing such quantifiable value to the studios, that it’s hard to see anyone challenging them in the near term.

“We’re all about empowering and fostering movie fans,” says James. “Movies are incredibly powerful. When politics and religion divide, movies unite.” It’s this kind of thinking and the recognition that short clips of premium Hollywood content were an asset that no one was taking advantage of that has positioned MovieClips as the intermediary between studios and their online video audience.