Enterprise IT managers are tripping over themselves trying to move toward the cloud. In a perfect world, they’d go cold turkey and move to the technology of the future without looking back. We don’t live in a perfect world. The reality is that enterprises often have hundreds of thousands to millions of dollars invested in existing network IT infrastructure and real security concerns not yet satisfied by the majority of cloud storage providers.

Enter “hybridcloud” platform provider Egyte which matches the need to move to the cloud with the current realities of most corporations, utilizing existing infrastructure and supporting behind the firewall access, coupled with the anytime, anywhere availability. “When we sign new accounts with more than 50 seats in size, seven out of 10 want to go hybrid,” says Egnyte CEO Vineet Jain.

The company is announcing today a $16 million Series C round of financing led by Google Ventures with participation from existing investors, Kleiner Perkins Caufield & Byers (KPCB) and Polaris. Google Ventures partner Karim Faris was named to the company’s board as part of the transaction.

Rather than replace existing local hardware, as advocated by consumer and small-business focused competitors Dropbox and Box, Egnyte deploys its software on top of this infrastructure and enables companies to manage what info gets replicated to the cloud. In this case, the cloud becomes a passive data store, while local servers remain the primary. The administrators manage all accounts, set permissions, and create folders, with the cloud software taking care of the rest. Users get mobile access via native iOS, Android, and Windows Phone apps (notice the absence of former enterprise mainstay BlackBerry) as well as HTML5, all over HTTPS secure connection. 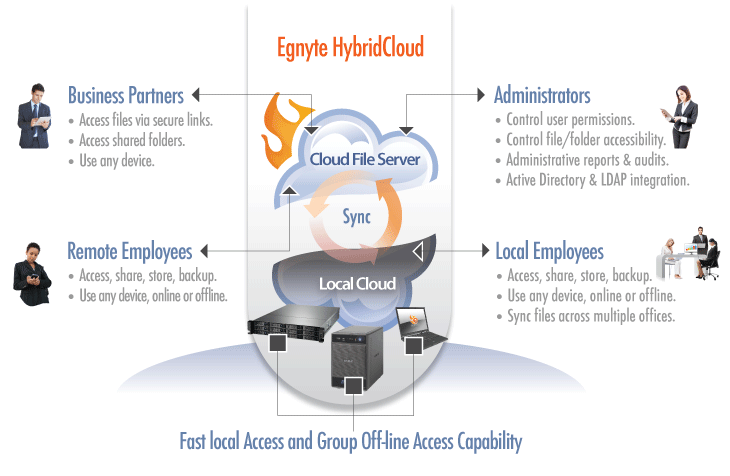 Since its launch in 2008, Egnyte has taken the approach that, unlike with consumers and small businesses, pure cloud-based solutions are not ideal for medium and large businesses. Yes, these businesses want remote desktop and mobile device access. But they simultaneously demand the speed and security of local storage as well -- according to Jain, file retrieval from local storage is currently approximately 25 times faster than it is from the cloud.

Critically, IT departments seek control and security above all else. “There is incessant use of Dropbox in nearly every company, but IT hates it,” says Jain. “It makes a mockery of the firewall, turning it into a sieve. Replacing Dropbox in these situations is a huge opportunity for us.” Placing a similar bullseye on current Box users, Egnyte ran a “Box Buster” promotion in April of this year, offering Box customers free Egnyte storage until the end of the year for switching over.

“Enterprises are clamoring for a solution purpose built for their needs,” says KPCB partner Matt Murphy. “Egnyte's hybrid cloud approach stands out in a market that until now has focused on consumer solutions.”

Google Ventures’ Faris echoed this sentiment, saying, “We listen closely to the needs of Fortune 100 executives and storage is a big issue. Everyone is wants to embrace the cloud for convenience and to avoid users signing up for personal accounts and putting sensitive info online. The demand is there, Egnyte’s solution is right, and its team is incredibly strong.”

Egnyte has been selective with its API-level integrations with other cloud solutions. SalesForce is one of the few that have made the cut, such that files remain within the Egnyte cloud, but IT personnel can manage them from within SalesForce. Additional integrations, such as Jive, are available on a case by case basis and only by user request.

The latest round brings the company’s total financing to $32 million. This figure is a drop in the bucket compared to Dropbox and Box who have raised $257 million and $162 million respectively, each at reported billion dollar plus valuations. As of April of this year, Egnyte reported 600,000 customers (all paying), while Dropbox and Box reported 50 million and 10 million respectively (each with undisclosed numbers of freemium subscribers). If traditional conversion metrics of two to three percent are applied, there would suddenly be a lot more parity in these figures.

“I don’t see Dropbox as a competitor,” says Jain. “They have become a great lead channel for us.” The CEO was less direct when addressing Box, preferring instead to say only that they address different use cases and that customers deciding among the two chose Egnyte 60 percent of the time. Even still, the company primarily competes with Box over accounts with 20-100 seats.

Egnyte recently signed one of the largest accounts in the sector totaling 25,000 seats with Y&R group. Providing solutions at that scale is an entirely different ball game and one which Egnyte hopes to differentiate itself. For accounts over 200, neither Jain nore Faris see any true competitors. Rather, Egnyte is battling companies deploying their own Virtual Private Networks (VPNs).

Also working in Egnyte’s favor, its mid- to upper-tier target market segment is far less price sensitive than the lower end. As a result, the company thrives by offering a 15-day trial but no ongoing free service like its competitors. Without the need to amortize the costs of a freemium model on paying customers, Egnyte actually offers comparable service to its closest competitor Box at 40 percent less ($15/seat versus $25/seat). It has even raised prices twice in the last six months with no negative impact.

The challenge awaiting other competitors, either new or existing, hoping to enter the market is a significant one. As Jain points out, Box has had a hard time implementing consumer desktop syncing as of late. Multiplying this problem across thousands of seats in an enterprise network and the task becomes exponentially more complicated. Egnyte purpose-built its system over the last four years with large enterprises in mind.

Egnyte’s biggest challenge then is brand awareness. Without raising nine figure sums like its competitors and having chosen to stay heads down in product building, the company has some catching up to do on the marketing front. This is the primary use of proceeds for the latest funding. Jain aims to further establish the brand, increase organic lead volume, and take advantage of the numerous opportunities being brought to the table by new partner Google.

Finally, 15 percent of Egnyte’s current business is international, despite no dedicated sales or marketing efforts in foreign markets. This is likely to change with the launch of a European marketing office planned within the quarter.

There is little doubt that companies big and small will be transitioning more and more of their content to the cloud going forward. As has been proven in other enterprise software markets in the past, most companies are slow to catch on to new trends and similarly not apt to change once a solution provider has been chosen. In that way, each cloud storage provider is competing to establish a beachhead and an early lead in this timely market. Based on the current offerings of each, Egnyte looks well positioned to meet the needs of the largest, most demanding clients. The latest bet by three of the biggest and best informed venture investors appears to reinforce this fact.