Watch Everything in 3-D? Here's How One Inventor Is Making it Possible

Gene Dolgoff remembers looking around his hometown of Manhattan as a child and thinking “I have to record and play back this experience.” Dolgoff thinks he's found a way with 3-D Vision, a converter that instantly transforms any 2-D video content -- from TV to video games -- into 3-D using algorithms that present stereoscopic image pairs and give the illusion of depth.

Now, the man who has always seen the world through 3-D glasses wants to bring his vision into commonplace content. Dolgoff's Fundable project for 3-D Vision has reached half of its $10,000 goal in only four days.

The 3-D experience was previously only available in blockbuster movies or among the few people who invested in 3-D televisions. Dolgoff says the high cost of making 3-D content through graphic artists or special cameras has been the biggest barrier to it going mainstream, which he believes 3-D Vision has the potential to do. The first generation of 3-D Vision will require glasses, but Dolgoff has a prototype in development that works without glasses, which he's been demoing for visitors to his Long Island, NY lab.

"Gamers have been really interested. After they play their games in 3-D on our system, they tell me 'I can’t go back to playing this in 2-D,'" says Dolgoff. 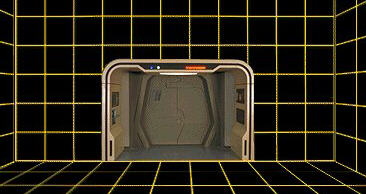 Dolgoff is best known for inventing the LCD projector and inspiring the holodeck in "Star Trek". His recent Reddit "Ask me anything" quickly turned into twenty questions about Gene Roddenberry's classic show. The holodeck, an enclosed room where transported matter is projected in holographic images, became a central plot device of Star Trek: The Next Generation when it debuted in 1987.

"In the future, matter holograms will be commonplace,” says Dolgoff. "I like science fiction, but I’m practical. I look at it as real applications."

It look 38 years and many inventions, from 3-D printing to holograms, for Dolgoff to find success an an entrepreneur. He took his digital projector company public in 1990 on the same day Saddam Hussein invaded Kuwait. The market plummeted, but investors who bought stock that day had returns of 35 times their money in three years.

3-D Vision will need an equity investment of at least $2 million to go into production and Dolgoff hopes crowdfunding will bring the necessary exposure to turn the prototype conversion box into a $299.00 mass market product. All $10,000 raised on Fundable be awarded to the winner of a crowdsource design contest to create the device that holds 3-D Vision's technology.