Charity:Water Donates September to Rwanda -- Here's What You Can Do to Help Us Help Them

For my last book I spent forty weeks traveling through developing countries, looking for great untold stories of entrepreneurship. It was an unforgettable two years, and I think a lot about the people I met and the things I saw. But there's one country that my husband and I think about nearly every day: Rwanda.

I wound up in Rwanda at the encouragement of Dan Nova from Highland Venture Capital, who was working with Paul Farmer and Partners in Health. Over a few extended trips to the country, I traveled to the richest and poorest areas. I did home visits to AIDS patients with Partners in Health's community health workers. I gorilla trekked with Jack Hanna and his family. I was charged by a baboon. We hiked out to a Pygmy village to give them a cow. And I met dozens and dozens of genocide survivors, many of whom are starting companies and rebuilding the nation's economy. Rwanda teaches you about the terrifying potential for evil that lurks within everyone, but also the potential for almost incomprehensible, super-human forgiveness.

It's a nuanced country, that I've written at length about. There is good and bad. But it's a country that's looking to technology to rebuild itself. A lot of the aid money that has poured 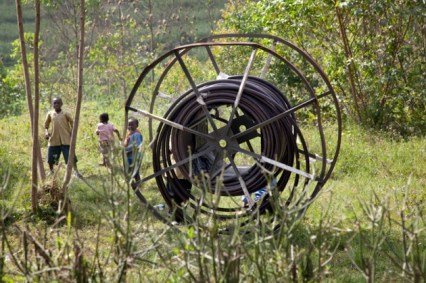 into Rwanda has been used to update the infrastructure, dramatically leapfrogging other African countries. Big fiber optic cable spools dot the landscape -- even in areas so poor that jogging is considered an ostentatious luxury, because you are purposely expending calories just to stay thin. Rwanda has one of the most ambitious One Laptop Per Child programs in the world. And the government sends 300 kids at a time to IIT to learn technical skills that can help rebuild the company. (I've wrote about a lot of this while I was still at TechCrunch.)

But while a modern country needs high-speed Internet, it also needs water. Scott Harrison of Charity:Water always does a big push in September, going back to the days when he gave up his September birthday to get donations. And this year, they are focusing their campaign on Rwanda.

I don't have a birthday in September, but we do have two PandoMonthly events this month, with two big guests: Tony Hsieh and Jonah Peretti. Given how quickly they sell out, that started me thinking....

This month, we're going to double the price of our tickets, and give the extra proceeds to Charity:Water. The tickets will still be affordable: A mere $40. But you'll be doing good while you learn and network.

If you'd like to donate $100, we'll give you a custom pack of all of our PandoMonthly T-shirts, including the rare staff-only T-shirt. For a $500 donation you'll get the T-shirts, plus a large, framed print of Hallie Bateman's illustration of why Silicon Valley's irrationality is also its brilliance. Hell, I'll also throw in a free ticket to the rest of the 2012 PandoMonthlys in either New York or San Francisco.

And, if you want to donate at the $100 or $500 level, you can buy your ticket now. You don't have to wait for the tickets to go on sale and miss them when they inevitably sell out. Just go to our Charity:Water page and donate (NOW!) and we'll sort out the rest. Please help us reach our goal of $20,000. It won't solve the problem, but it'll help.

If you are like me, you will get barraged with Charity:Water birthday requests this month. But please consider funding this one.