Groupon, Yahoo and Facebook are three companies with very different businesses. Yahoo is now a sad giant. Groupon, love them or hate them, has gone from meteoric growth to an equally meteoric fall. And Facebook,  once thought to be the new Google, has insiders dumping the stock in droves.

On the surface, each of these companies appears to have a different set of problems. Depending on who you ask, Yahoo problems range from poor leadership, bloated ranks, disenchanted employees, among other reasons. And all of the same factors could be applied to Groupon. And then there's Facebook, with its billion users engaged in ungodly amounts of unmonetizable chatter, getting more unmonetizable as they go mobile. Could there be a common thread?

Indeed there is. All three companies monetize their users via "Demand Generation" advertising.

Demand generation, as the name implies, is when the advertiser pushes a product or a service offering at the user in order to create demand. Such is the case with the daily deal offers from Groupon, where one might get a discount offer for laser hair removal in the email, whether or not you are in the market for such. Such is the case with the display ads on Yahoo for a home mortgage, no matter that you rent an apartment.

And of course, the ads on Facebook that make little sense most of the time. "Sponsored Stories" from a friend-of-a-friend who clicked like on some irrelevant product are not much of an improvement. And then there is the mobile experience. When screen space is limited and time is short on the go, users pay even less attention to Demand Generation ads that cross the line from annoyance to nuisance. 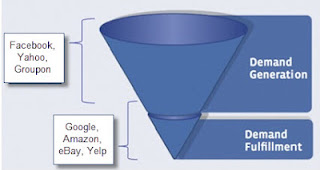 We hear from each of these companies that they are improving their technology, or changing their leadership, or restructuring their organizations to unlock the huge potential of their user base. But the real problem is that Demand Generation is not a viable format for building a profitable business on the Internet, and is in secular but permanent decline.

Each screen has hundreds of links screaming for the user's attention. The user will only look at things that are relevant to them, and will only click on those links that promise substantial value. Such relevance and value is possible primarily in Demand Fulfillment, when the user has an explicit need and is in the process of fulfilling that need.

A simple way to identify demand fulfillment is when the user enters a search term to express a need. Such is the case on Google, Bing, Amazon, eBay, Yelp, Etsy, etc., where there is enough inventory to require a search box. With Demand Fulfillment, advertisers get a measurable ROI -- what fraction of users who saw the ad complete a transaction? Relevance for the user and ROI for the advertiser is an unbeatable combination.

Recently, Microsoft took a $8 billion writedown on their aQuantive display ad network acquisition. We heard plenty about mismanagement and poor performance, but no mention of the fact that Microsoft did not integrate search intent from their Bing engine into the aQuantive display network. As a result, aQuantive was still playing the Demand Generation game, while its competitor, the Google ad network had moved its inventory into the Demand Fulfillment game.

So three seemingly disparate companies each with a huge user base, share a common problem. They are engaged in a dying business model, and that death is being accelerated by users going mobile. The long term prospects for these companies cannot be improved by hiring more engineers, laying off engineers, changing CEOs or more financial engineering. The only sustainable fix is to shift business focus from Demand Generation to Demand Fulfillment.