It's pretty much guaranteed that whenever you complain about problems with inflight wifi, some jackass will cry "first world problems!" Well, guess what, jackass -- this is a site about issues affecting Internet entrepreneurs. Pretty much all of our problems are first world problems. Also: fuck you.

Anyway now: I'm writing this from 35,000 feet on the VX22 "Nerd Bird" from SFO to JFK. Like you, I love Virgin America. Leather seats, delightful inflight service, cheap first-class upgrades and... well, ordinarily I'd add reasonably priced wifi on every flight. But not any more, apparently.

The guy sitting next to me was the first to notice. "What the hell?" he muttered under his breath, before closing his laptop and putting it away. My reaction on logging in to my Gogo account was the same, albeit more profane. Virgin no longer offers wifi flight passes (flat rate passes good for the whole flight), but instead demands you either pay for a $30 monthly pass or pay by the hour. $10 an hour. 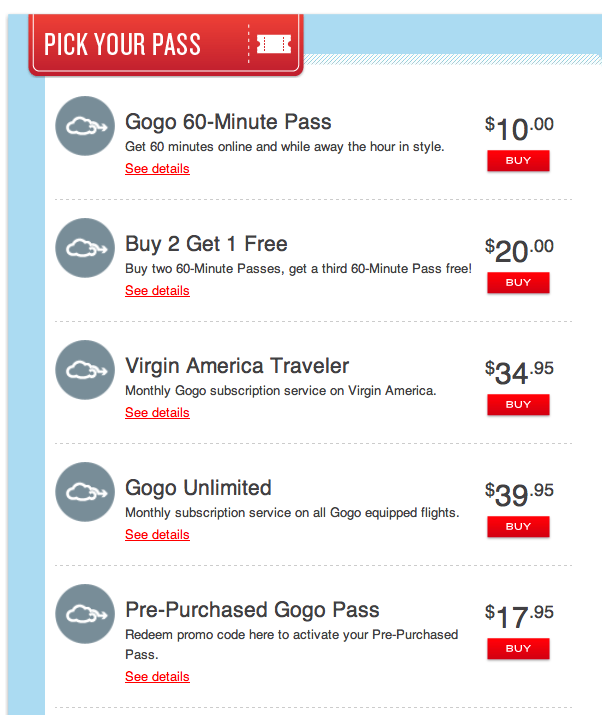 At first I assumed I was just failing to spot the correct button. But no, Chris Sacca confirmed on Twitter that he'd had the same experience, as did this guy. And it looks like it's not only Gogo on Virgin that's affected: Other Tweeters have complained about a similar change on Delta.

But here's the really odd part: Virgin America seems to know nothing about the change. A change that makes the cost of wifi (for non-subscribers) an insane $60 for a cross-country flight (or "only" $40, if you figure out their odd 'buy two get one free' option). In fact, Virgin America reps say it's "not true" that there has been a change, when there demonstrably has been.

I asked Gogo for a comment, and I'm told their "pr director" is going to get back to me: Always a good sign when they send a flack. They do say that they have implemented "a few price changes" though. Might have been a good idea to have flagged those changes with your biggest airline partners, non? After all, people increasingly make travel plans based on their ability to work in the sky, and suddenly being hit with a $60 charge is a pretty big problem, no matter which world you live in.

(Note: Filing this post has cost me roughly $7. Thanks Gogo, you gouging sons of bitches...)