If you thought that social video had already been sliced and diced in every conceivable way, there’s yet another new entrant eager to see the industry collectively put version 1.0 behind us and get down to real innovation. This latest challengers is Streamweaver, launching today out of Nashville.

Streamweaver for iOS is not so much solving a problem with existing social video platforms but rather offering an entirely new experience. Co-founder and CEO Erik Carlson calls the new experience “split-screen synchronicity,” which in English means that up to four users at a time can record video simultaneously, and Streamweaver will sync them all for simultaneous split-screen playback.

If you’re like me, you probably have to ask yourself, do I want this? Based on the final product, I’d argue that viewing the same event from multiple angles results in far richer and more interesting content. It may not be appropriate, or possible, in every instance, but where multiple smartphone wielding videographers are present and have time to pre-coordinate their efforts, the output justifies the effort.

If you’ve been watching the social video space closely, you may also be asking, isn’t multi-angle video what Vyclone is attempting to do? Yes, but in a different way. First, the output of Vyclone is a single video that is a synced mashup of the various streams, meaning the viewer is constantly shifting perspectives, as is common within professionally produced Movies, TV shows, and commercials.

While this Vyclone experience might be cool for creating a homemade music video or sports highlight reel, Streamweaver takes a different approach by letting users view every second of footage from multiple perspectives, or as Carlson puts it, to “see the other side of the story.” The end result pretty engaging, but whether it’s enough to make Streamweaver the go-to video creation app is yet to be seen.

“We all have different perspectives of any given event,” Carlson argues. “With Streamweaver, we set out to connect perspectives and give consumers the thrill of seeing what they did not see – the other sides of the story – all in sync with their own.”

Secondarily, Vyclone is geographically limited, such that all streams must be in the same general location. Streamweaver has no such restriction, only that the feeds overlap in time. While it might be odd to see four simultaneous, but unrelated streams from opposite corners of the globe, this could be pretty compelling around moments of shared interest. For example four different takes on New Years Eve celebrations, viewing the final moments of a major sporting event, or listening to a powerful news report would be great to see.

Finally, Vyclone combines the streams of any users present at a given event – such as a rock concert – while Streamweaver requires that users invite one another to collaborate before they begin recording. In an increasingly privacy-conscious world, this may be viewed as an advantage, despite its limiting serendipity. 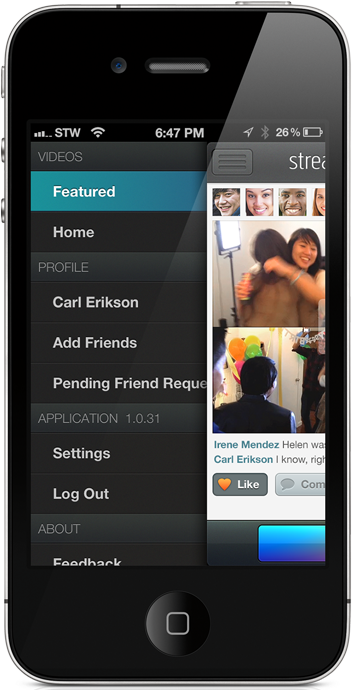 Streamweaver takes a not so original page out of the existing social playbook, offering synchronous friend following and content sharing through its own micro-social network. The platform also supports a wide variety of sharing options, including Facebook, Twitter, Google+, email, and SMS, with recipients receiving a link to view content on the company’s site – there are no immediate plans for an embeddable player or to allow video downloads.

Version 1.0 of social video apps were those widely popular but uncomfortably spammy “Instagram for video” platforms like SocialCam, Viddy, and Klip, all focused primarily on sharing. SocialCam, the largest of the bunch by total users, was acquired for an underwhelming and bubble-bursting $60 million by AutoDesk in July. Viddy remains independent, looking for ways to spend its massive pile of celebrity cash and to live up to its sky-high valuation, including through becoming a platform. Klip is still chugging along as the well-behaved No. 3, but has done little to out innovate the competition or advance the industry.

Version 1.5 of this space has been about new creation tools, several of which we’ve covered here, including those like Ptch that combine multiple types of media, those like Vyclone which delve into multiple streams, and even those like SnapCuts that license premium content for story creation. Streamweaver fits squarely into this category, and although unique, doesn’t seem to have broken through any significant barriers to justify calling it a Version 2.0 video app.

The Nashville-based startup has raised $2 million in seed financing from hometown VCs, Tennessee Community Ventures (TCV) and Mountain Group Capital. Streamweaver isn’t concerned with monetization at this early stage, and instead is focused on customer acquisition and validating the model. That said, Carlson and his co-founder Jay Hake, as well as TCV managing director Eric Satz, are all confident that the business is not one without a fundamental business model. The team claims to have several options in mind likely including some element of premium features.

Regardless of where Streamweaver fits in, there remains an overarching question that plagues the social video ecosystem. That is, are users sufficiently comfortable being in front of a video camera, and sufficiently capable behind one to make premice work? Mainstream photography is more than 50 years old, and for the most part we’ve got it handled. This is less true for videography, although that fact is changing quickly and may look differently across the generational spectrum. It was these types of environmental limitations that led Socialcam founder Michael Seibel to proclaim following his acquisition that “there will be no Instagram of video,” something I have heard a number of well placed investors echo since then.

There’s no question that the smartphone and broadband penetration have, in parallel, dramatically accelerated the pace of video creation and consumption. Now, with the latest generation of social video apps, the software tools are finally available to make creating compelling video content possible for the average consumer. The final remaining question, is whether consumers want something like this or whether it’s a solution in search of a problem.