YieldMetrics Brings Radical Transparency to Online Advertising, Whether You Like it or Not

The display ad market has been built on a model of opacity and black boxes. Online publishers, advertisers, agencies, and ad networks each count on the fact that the party on the other side of the table doesn’t know the source, makeup, or pricing of their ad inventory. As a result, decisions are regularly and knowingly made with incomplete information. Los Angeles startup YieldMetrics is looking to shake things up by providing a kind of market transparency that has never been available before.

It’s not everyday that you hear statements like, “These guys are going to throw an entire industry into chaos; I’m talking massive disruption...” But that was the context of my introduction to the YieldMetrics from a local VC with no stake in the company.

As ridiculous as it seems, many top websites (aka, “publishers” in industry parlance) don’t even know who all of the advertisers are on their site are, and ad networks don’t know which sites are using which other networks. YieldMetrics has developed patented technology for remotely analyzing the advertising activity on these sites and delivering clear insight to all interested parties.

The company calls its technology PathSource, which utilizes cloud-based, intelligent crawlers, to capture detailed information about advertising activity across thousands of top publishers. The company’s solution currently scrapes the top 3,000 sites in the world, but customers can request additional domains be added to their dashboard. (A notable exception to this list is Facebook.)

PathSource analyzes and maps the parties involved in serving each ad on a page, including ad servers, ad networks, ad exchanges, supply side platforms, demand side platforms, yield optimizers, data providers, and others. For the uninitiated, this may sound like industry jargon, but what really matters is that online ads are passed around like hot potatoes before they’re actually served to a user, and the path and number of parties involved can dramatically affect pricing.

“We answer the questions, ‘Which advertisers are buying inventory and via what channels? Where are advertising exchanges gaining share? How are publishers monetize their inventory?’” says co-founder and CEO Gabe Gottlieb. 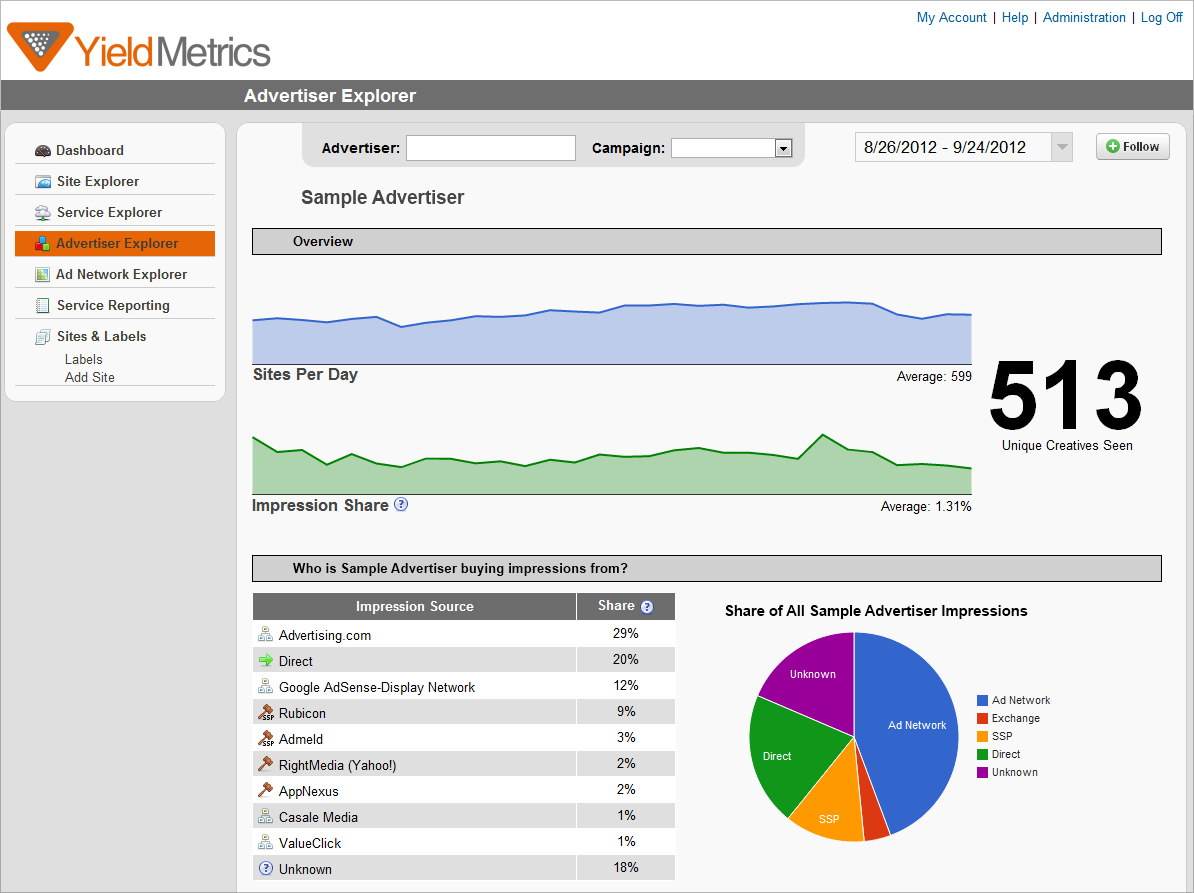 With both a broad and granular picture of activity across these top sites, which collectively serve a disproportionate majority of all online ads, YieldMetrics provides clients not only with insights about their own advertising ecosystem, but that of competitors. By revealing exactly what’s happening behind the scenes, the company allows each interested party to make informed decisions at every step in the process.

The service is like one big forced game of “I’ll show you mine, if you show me yours.”

YieldMetric’s commercial product, AdRoutes, has been available, although quietly, since early spring. AdRoutes is an analytics platform that delivers information like full listings of competitors' customers, details on an advertiser's media plan, breakdowns of how a publisher is selling its inventory, the channels an advertiser is using to reach its targeted audience, and views of an advertising network's inventory.

AdRoutes market activity data is updated daily, unlike the majority of other solutions which deliver monthly or quarterly insights. The product is capable of delivering real-time alerts based on market changes, such as a target advertiser beginning a campaign on a competitor’s site. 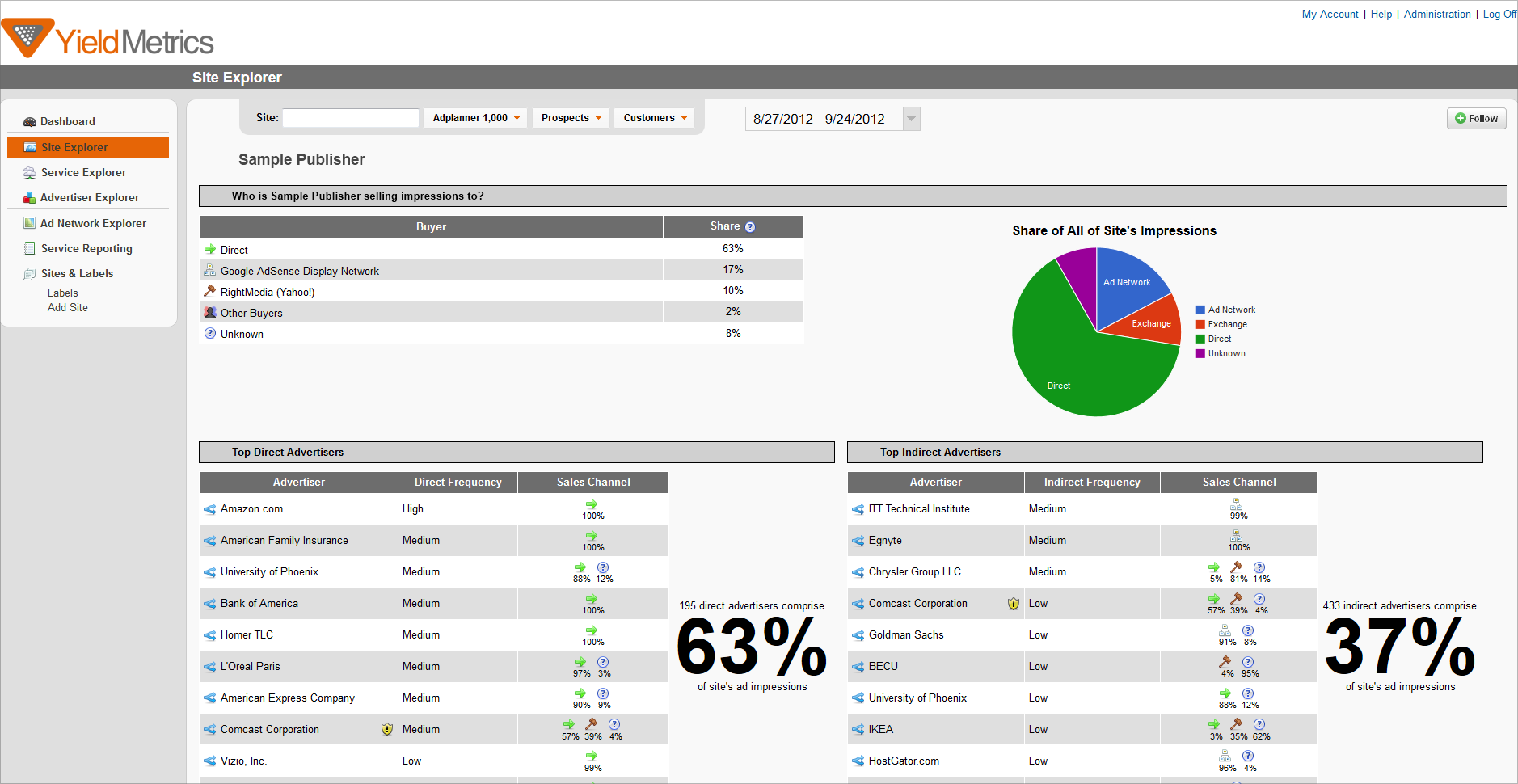 Given the level of insight provided, many industry leaders I’ve spoke to have called it a must-have product, and clients are signing up in droves. According to Gottlieb, the young company has already signed up two of the five largest ad networks in the US and several top demand side platforms.

The analytics platform is currently available as an all-you-can-eat SaaS solution, although the company is contemplating offering a wider variety of basic and premium tiers in the future. Beyond simply collecting all this data, which is a hard enough technical problem in and of itself, YieldMetrics is particularly useful in that it serves this data in a clean and actionable interface.

Founded by two Microsoft alumni, Gottlieb and Tom Lorimor, who began the project with no prior advertising industry experience, what YieldMetrics has created in a short time is fairly remarkable. With large clients already signing up, enterprise level price points, and only two employees the small startup is already profitable.

The company is a member of the Winter 2012 class of the LaunchpadLA accelerator and has not raised any outside financing beyond its nominal investment. A future financing round is currently in the works according to several sources, and appears to be garnering substantial interest. The next phase, according to its CEO, will be to build a sales force to deliver YieldMetrics as widely as possible. With the number of targets within each industry segment, the addressable market is truly enormous.

Having taken a look under the hood, I’d say the early excitement is more than justified. Incumbents and those relying on information inequality won’t be thrilled to see new levels of transparency, but there’s little they can do about it. Information wants to be free, and YieldMetrics is seeing that the advertising industry falls in line.