Instant feedback can be incredibly addictive and the Web only enables the addiction. How often do we panic when someone hasn't immediately responded to an email, Tweet, or instant message? Did we say something wrong? Did we send it to the wrong Matt? Why aren't they responding?!

We could just calm down and take a deep breath. Or we could download an app that gives us instantaneous advice, opinions, and LOLs from a mass of strangers with smartphones.

That's what San Diego-based Blurtopia has built in its brand new iOS app, launched today. The feedback app gives users three options to ask other users via "blurts," the options being thumbs up or down, rate something on a scale of one to five, and "this or that."

Beyond soliciting advice from the masses, Blurters can pose questions to a select group of friends or self-identified groups like "beer lovers" through the app's tagging service. However, blurting to a wider audience has been more popular while the app is in beta. Tagged groups require a network effect to be useful.

Co-founder Ryan Bettencourt was working on an enterprise app for professional decision making when he witnessed a better use case for his idea. It was a woman in a shopping mall taking photos of herself trying on shoes and texting them to her friends to get their opinions. He realized how common of an action this is, and decided to rethink the entire thing, instead building a simple app for consumers to give each other instant feedback.

Blurtopia now has a very basic tagging system that allows people to form groups with their friends and propose blurts to them. They can be related to themes like "coffee lovers," or just a clique of friends. Blurtopia will grow, Bettencourt says, when users ask their friends' opinions and they download the app to participate in the conversation.

In beta, the blurts have ranged from very immediate topics like "What should I order?" as well as timeless debates held for entertainment purposes ("Were the Rolling Stones better than the Beatles?"). Bettencourt says initial users have become addicted to both answering blurts and receiving instant feedback on their own questions. The results page is clever, too, with a pie chart illustrating your feedback.

Bettencourt has been involved with KidZui (now called Zui), and CellarThief, a site he sold. He and co-founders Keiran Flanigan and Grant Bostrom have already been approached by investors about Blurtopia but decided to wait to bring the product to market before taking any outside capital. They also waited until the iPhone 5 was released to ensure their app was optimized for it.

Blurtopia hasn't invented the idea of a feedback machine, but with his brightly colored, well-designed app, it might have improved upon it.

Thumb is a New York-based app that facilitates Q&As as well. It's been around since 2010 and since then, has received a billion responses to 20 million questions. So the concept works. Blurtopia will differentiate itself in its ability to get tags right. If you use Thumb to get opinions from the masses, you might use Blurtopia to get opinions from your friends. 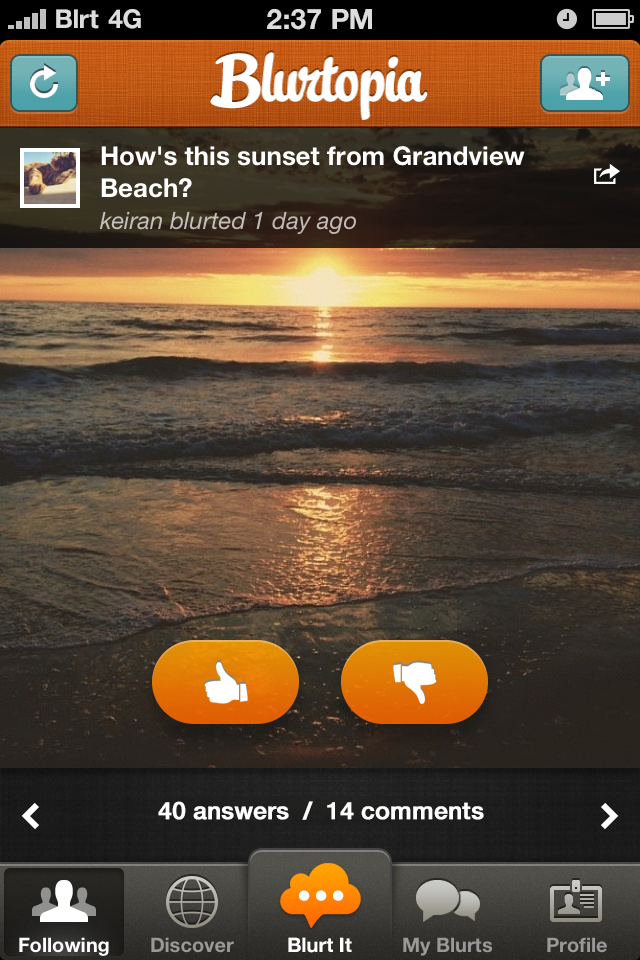 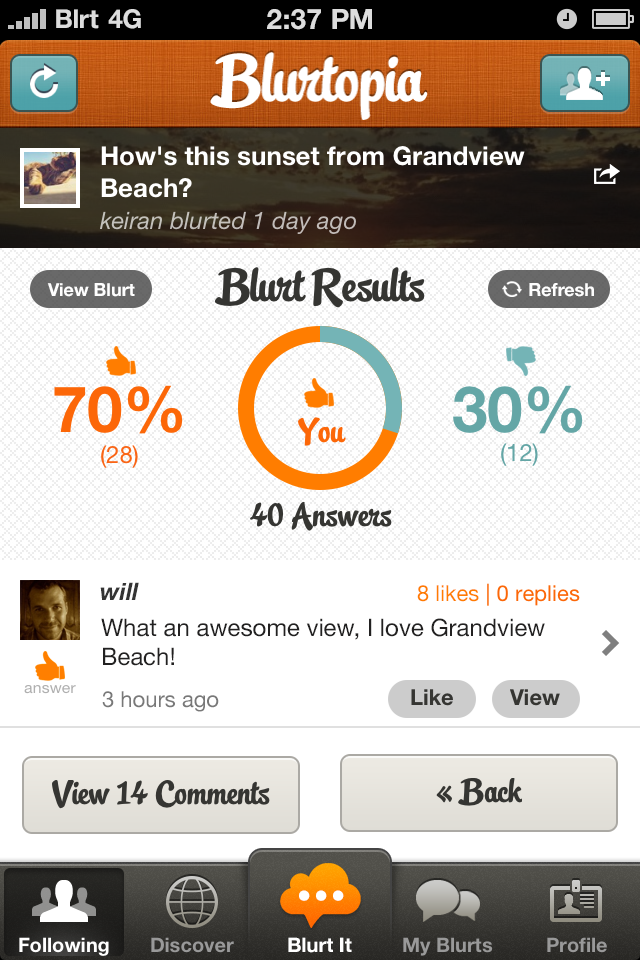 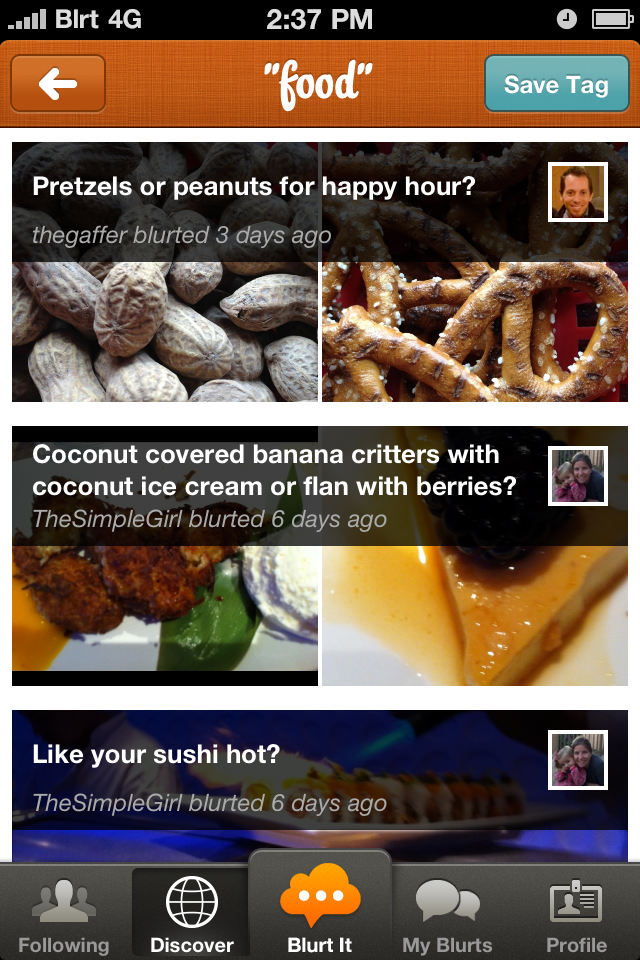 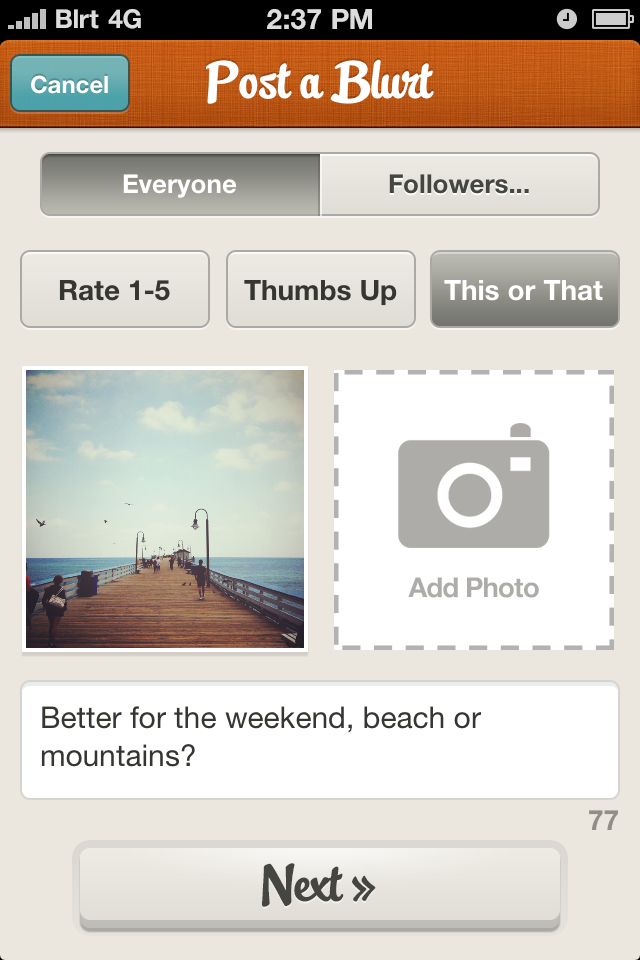 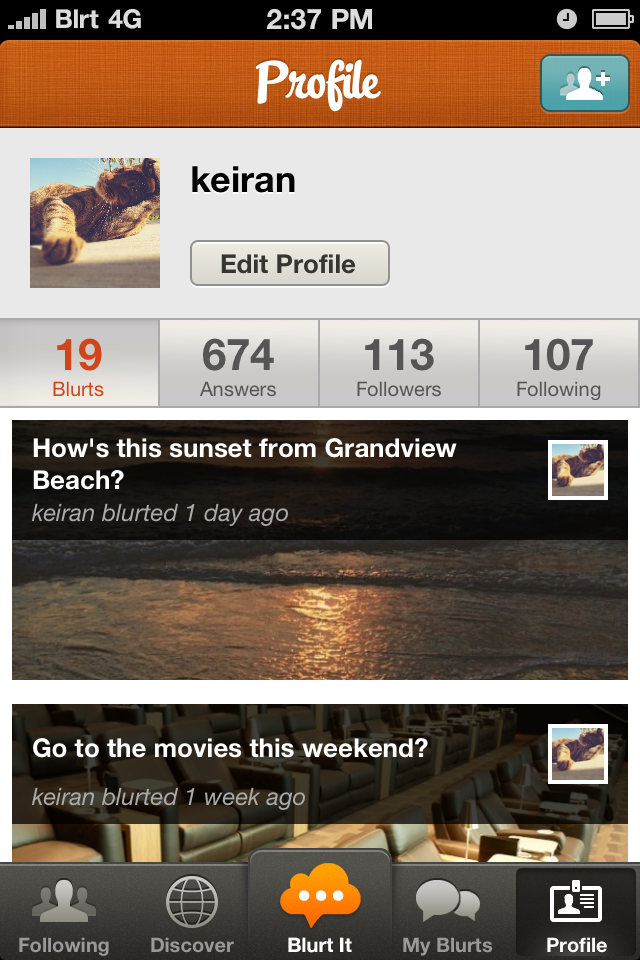