Of the litany of things standing between an entrepreneur and a successful small business, governmental paperwork is among the most banal and unnecessarily complicated of all. Unfortunately, the simple act of failing to complete the proper licensing forms, or doing so late, can cost a business thousands of dollars in fines and endless headaches. But figuring out what’s actually required isn’t so simple either, and typically means having to navigate byzantine local, state, and federal government websites that more often than not only provide a fraction of the required answers.

Los Angeles startup DocStoc launched its License123 product earlier this year to simplify the process of figuring out what licenses and permits are required, and how and when to complete them to remain in good standing with the powers that be. The company has compiled a database of all forms required in every US city with populations above 100,000 and expects to grow to cover 80 percent of the nation by year’s end.

In the process, DocStoc has been receiving requests from city governments to license what is currently a paid product and make it free to their constituents. Later today, the company will announce the first such partnership with the city of Los Angeles, spearheaded by current city council member, business development committee chair, and mayoral candidate Eric Garcetti.

“I want entrepreneurs to know that LA is open for business, and License123 will help potential business owners access information that once took a huge amount of time – or even a paid lobbyist – to gather with just a few clicks of a mouse,” said Councilmember Garcetti in a press release about the collaboration.

Under the partnership, the service that typically costs as much as $49.95 can be accessed for free via a branded portal available on Garcetti’s District 13 website under the section “Free Business Licenses.” According to DocStoc founder and CEO (and unapologetic Garcetti supporter) Jason Nazar, it’s more than a handshake partnership and there is actually money changing hands here, although he was unwilling to reveal specifics.

“Eric is a pro-business champion that came to me looking for ways to help out his constituents,” says Nazar.

By aligning with the city, rather than using its own internal research team to manually aggregate and map out the permitting quagmire, DocStoc can ensure that License123 is fully comprehensive, not to mention gaining access to additional content. As part of this effort, the company is currently completing a follow-up audit with the city of LA and has been able to add forms related to “DBAs” (Doing Business As licenses) and other subjects which are not typically available in other markets. 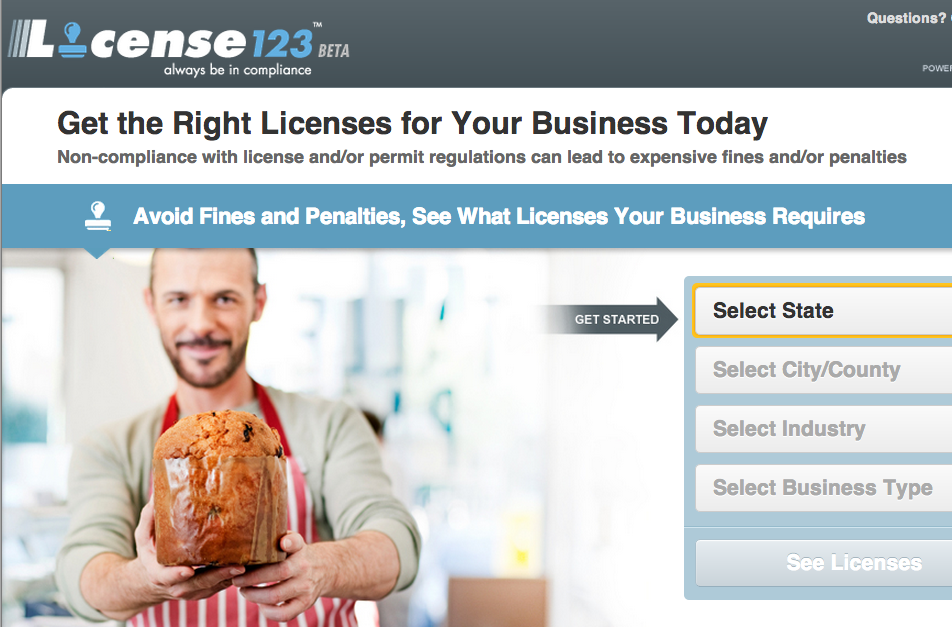 Users who visit License123 start by selecting from a series of four dropdowns, listing state, city, industry, and business type. In “under 30 seconds,” they’re shown a list of all forms required and detailed instructions on how and when to complete them, as well as an estimate of the total cost. This service is available for any permit that can be filed without government approval. The only real limit to the service is that it doesn’t handle any permits that require governmental; approval approval, such as construction permits that must go through a planning commission.

License123 is an idea that has a fairly infamous past. During the dot com heyday, GovWorks.com soared to spectacular heights offering a similar service to automate government processes such as renewing drivers licenses, paying traffic tickets, and changing mailing addresses. The company’s ascent and ultimate collapse were chronicled in the cult hit movie Startup.com.

Despite the inglorious end to GovWorks, it was a great idea then and is an equally good one now. Fortunately for License123, the cost of running such a business has declined by a factor of 100 in the last decade-plus and consumers are far more conditioned to get their information online. Also, by aligning with city governments, License123 benefits by both improving its product and reducing the cost barrier to its end users. The move is equally wise for an ambitious politician, or pro-business city, looking to make friends in the community.

True win-wins are a rare occurrence in business, but DocStoc and the city of LA seem to have cooked up a nearly ideal scenario. The company has reportedly agreed to the initial framework of a similar partnership with the city of San Francisco which Nazar says will be announced in the coming weeks.