Moveline raises $1.5 million to deal with moving companies (so you never have to)

When Moveline moved into TechStars New York, the company -- started as a side project within an agency in Virginia -- had a totally different plan to disrupt the moving industry. The company had created a marketplace of moving companies, which was okay, but nothing special.

While working out of TechStars, the company's founders (Frederick Cook and Kelly Eidson) realized a video-focused consumer facing app would be a much better way to help them and their movers.

The company had previously raised a $400,000 seed round from Modea Ventures and Lawrence Transportation Systems last December.

It works like this: movers sign up on the site, take a quick video of their apartment with everything in it, and Moveline creates the inventory for you. The company then gets quotes from the moving companies in its system and connects the person with a mover (there are five in the system in New York right now). Throughout the entire process, the Moveline "Move Captain," helps manage everything. 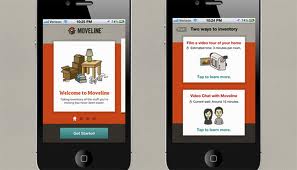 "The thing that's been surprising us is that people would rather communicate their issues and questions to us than do it directly with the moving company," co-founder Kelly Eidson says. It's because Moveline communicates with technology -- texts, push notifications, Skype -- instead of phone calls to a crew, she explains. With the app, the moving process is straightforward and familiar to what they typically do with their phones.

Moveline takes a cut ranging from six percent to 15 percent of the cost of each move. The cost usually ends up being comparable to booking directly through the company, which often pay high commissions to their sales staff. Which is a little disappointing to learn, considering almost every moving "sales" person I've dealt with has been inconsistent and hard to reach. "We basically replace that to bring people multiple quotes," Eidson says.

Several of Moveline's investors, like Chris Sacca and David Cohen, liked the way Moveline is helping to modernize an old school industry that looks boring from the outside but has a "fun challenge." Car service Uber, which Sacca, Cohen, and all of Silicon Valley are investors in, is similar to Moveline in the sense that it's a tech product -- the app -- with logistics and customer service. Another of Moveline's investors, Long Island VC David Calone, invested after he'd used the service to move. The moving industry is lacking with it comes to technology and accountability, Eidson says.

The company currently does local and long distance moves in or from New York. It's biggest challenge will be expanding to other cities. Moveline is familiar with the New York market, but since moving involves hundreds of variables, it will be tricky to make sure the company's system works in each market. But it should move (ha) quickly: a New York competitor called Unpacked offers a similar experience to what Moveline initially was -- an inventory app. Moveline's video experience has made the biggest difference in its customer service and led to referrals, Eidson says. The company launched at TechStars' demo day in June and has (strangely) already had a couple of repeat customers.