Sure, being in a tech hub matters, but there's scant benefit to being the poster-child

"I must be in the wrong place," I kept thinking to myself.

I was wandering in circles in a large office building in downtown LA. It was remarkable in just how unremarkable it was. It could have been a set for a movie about a guy slaving away at a dead end job at the world's most unglamorous company.

As I wandered, I saw balding paralegals wearing ties askew and the weariness of the world on their brows. They all looked late for something. Sighing seemed an inevitable part of walking down a hallway for them.

As I wandered in a loop, finding any suite but 330, I wondered if I was being punked. Just then I saw a rail-thin girl disappearing behind a corner. She had a black pony tail on the top of her head and was wearing a flared miniskirt and black studded ankle boots. I chased her down like she was the white rabbit. "You must know where Suite 330 is," I said when I caught up to her.

"It's right in front of the elevators," she said with a smile. "People miss it all the time."

Finally I found it. Two words I never expected to see surrounded by cheap brass and formica: 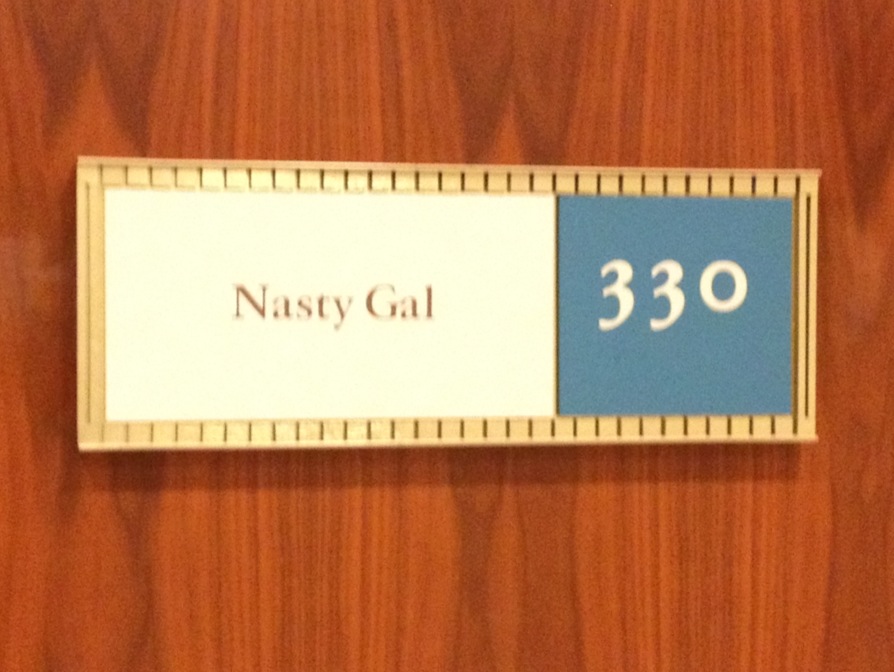 This was my last day in LA, and I'd spent the previous one having meetings in hip, edgy Silicon Beach offices that screamed the work-all-day-surf-for-lunch entrepreneurial lifestyle the LA scene is trying to hard to prove its ecosystem can support. There's always a lazy surfboard leaning in the corner of these offices. Everyone alternates between "stoked" and "bummed." At our second LA PandoMonthly, held the night before, the evening had ended in a keg stand. We've done more than 15 events this year, but that was a first.

And yet here in the stodgiest offices you could find was the edgiest entrant of the bunch: A $128 million revenue company bootstrapped until recently by a 28-year-old, self-taught ecommerce savant who looks like a prettier version of the "Girl with the Dragon Tattoo." Her company, NastyGal, is the very incarnation of sexy female badass.

When I last wrote about NastyGal and its founder CEO Sophia Amoruso, she told me she didn't even really know where or what "Silicon Beach" was. Looking around, I could see that. She may be starting her company in LA, but it's a stretch to say she's part of the Silicon Beach scene.

And yet, Silicon Beach would love to embrace her: With the shuttering of BetterWorks, and the well documented struggles of BeachMint and ShoeDazzle, NastyGal is one of LA's last big shots at building an online giant. For this ecosystem to ever be taken seriously by its snobby Valley neighbors to the north again, someone of this wave has to.

Since raising $40 million back in August the press has been abuzz with the unique personality and unlikely success of Amoruso, so we don't need to retread that here.

But what has stuck with me since our first talk is how emblematic Amoruso is of a striking pattern: As tech ecosystems thrive, frequently the strongest companies live on its fringes. The poster child of any given place or movement may do well, but it rarely becomes the most dominant company in terms of exits or lasting impact.

Consider the early Web 2.0 movement in San Francisco: Both LinkedIn and Facebook were relative outsiders to the raging parties and coder scene that exploded in San Francisco. Both companies purposely kept their headquarters down the peninsula, bucking the almost dominant trend of everything being in the city. Their founders were almost never fixtures on the party scene, eschewed conferences and rarely graced the digital pages of the silly gossip blogs like ValleyWag.

In New York, two of the most exciting companies are Etsy and Kickstarter -- both of whom similarly avoid the Silicon Alley limelight. Earlier this year, when we were breaking the news of Etsy's latest fundraising, Erin and I called all of our New York contacts -- the busybodies who usually know everything that is happening, where it happened and for what valuation. And each of them said a variation of the same thing, "Etsy kind of keeps to itself."

Kickstarter has been more extreme eschewing any press, hype, magazine covers, speaking gigs -- everything that founders like Dennis Crowley feel are their duties running a consumer company. They just want the attention on their projects, they say -- even if they get less attention as a result of the company's reticence.

Meanwhile Foursquare and Tumblr, while still promising properties, are suffering a hype hangover with even the most bullish local boosters wondering how they'll grow their businesses into their heady valuations. They may well end up better off than the Valley's Web 2.0 poster children like Digg or Silicon Beach's BetterWorks, but quiet Etsy with its early CEO troubles could well be bigger than either.

Meanwhile back in Los Angeles, it was a shock when BetterWorks closed down because its founder Paige Craig was one of the most vocal cheerleaders, angel investors, and faces of the Silicon Beach scene with his penthouse beach parties. Brian Lee was far less flashy and had one successful company under his belt in LegalZoom. But that only made the unnecessary and ignominious fall of ShoeDazzle more shocking. And then there are widespread reports of fratty BeachMint struggling as well -- which its executives continue to deny but every single other source close to the company avowedly confirms.

Meanwhile, there's NastyGal -- a company almost no one had heard of until a few months ago.

I don't mean to say these companies' geographic location in tech ecosystems don't matter. The lesson is not that Facebook, Etsy, or NastyGal could have been started in Toledo, Ohio. (Sorry, Toledo.) That's the bedeviling thing. Each of these companies on the fringe greatly benefitted from the ecosystems they were in. They just also benefitted from not being in the center of them.

Startups are a bit like political candidates. Sure they have to have determination, a mission, and a product everyone can rally around. But without the machine to propel them into office, the odds are stacked against them.

Facebook and LinkedIn were key planets orbiting around in the powerful PayPal galaxy, and that PayPal culture, cash, expertise, and mentorship went a long way towards ensuring their successes. Founder Reid Hoffman learned how to build LinkedIn because of the failures of his last companies. And had it not been for his involvement at PayPal, he likely wouldn't have raised that original round from Sequoia, he told us back in August. The idea of a professional social network just wasn't compelling back in a time when the consumer Web was considered dead. He poached much of his executive team from the PayPal mafia as well.

Likewise, Mark Zuckerberg was able to scale from 19-year-old kid to a public company CEO because of his sponge-like ability to learn, but also because of the mentors he found in the Valley. It's hard to imagine him raising more than $1 billion in private capital anywhere else. And Stanford, Google, and the continual pilgrimage of talent to the Valley allowed the company to scale to thousands of employees relatively effortlessly.

These companies benefitted as much as anyone from the Valley. They just didn't need the parties and conferences to get the rewards.

Similarly, Etsy and Kickstarter have benefitted from strong local investors and mentors like Fred Wilson and Chris Dixon, and the fact that it became socially acceptable for top talent to work at a startup in New York.

When I asked Amoruso back in August if it made any difference being in Los Angeles she initially said the company could have been started anywhere. But the more we talked about it, she granted that LA had clear advantages -- they just weren't the advantages that Silicon Beach would likely talk up.

In LA, she had more access to models and certain fashion talent that didn't exist in the Valley. "(In the Bay Area), I could hire a graphic designer who made websites for Apple and they may be beautiful, but no one was doing fashion," she says. "There's Gap, Old Navy and Banana Republic, but the models that do well up there are closer to thirty. It's a different scene than New York and LA. I wouldn't have known how to do a fashion line or put that team together if I'd stayed in the Bay Area." 70 percent of her line is physically made in LA as well, and her call center is down the road in Korea town.

That's not too dissimilar from why Elon Musk left Silicon Valley to start SpaceX in LA: Because it's the epicenter of aerospace talent in the world. Musk is another example of an outlier to the Silicon Beach world that has hands down built the most impressive companies in LA.

If you're in the Valley, the take away from this trend is clear: Stop talking, partying, and pitching, and start doing. There are always the entrepreneurs who spend more time trying to get covered in a tech blog than building their companies, and I've never seen one of those companies succeed in the long term.

But in other more nascent ecosystems, it's a more complex situation. Those parties and conferences actually play an important role of evangelizing startup life and connecting people into the scene who don't have other clear ways to connect.

Despite the fate of BetterWorks, Paige Craig did a lot to champion the tech scene in LA -- helping give founders courage to start companies and employees to work for them. And the emergence of a visible "scene" encouraged blogs like us to hire a local reporter to cover Silicon Beach. We're bullish enough that LA is the only city outside of San Francisco and New York where we do regular PandoMonthly events. And the appearance of critical mass encouraged Valley VCs to start spending more time and money in LA. That encourages more local angels, because they're confident there's someone who will do the Series As and Bs.

Likewise, Dennis Crowley's Gap and Best Buy ads gave New York the confidence and swagger that it could build more than a just media company online, it could build a Silicon Valley style consumer Web app. It's hard to measure the boost that gave the ecosystem.

The Valley may not need Mark Zuckerberg or Reid Hoffman going to parties to evangelize startup life. But is there a level on which it is selfish for the Estys, Kickstarters, and NastyGals not to give back to that collective? Even the reclusive Zuckerberg used to go to the Crunchies pre-AOL, because he felt it was an important community event.

I asked Etsy's CEO Chad Dickerson a few weeks ago, and he argued Etsy does give back, it just does it in its own way. It galvanizes its own community on its Code as Craft blog, and organizes its own Code as Craft Technology Talks which sell out hundreds of tickets in less than an hour.

It's less a scene thing, and more of a strict coder thing. Etsy also open sources several projects. "We try to give back to the community in meaningful ways," Dickerson says. "The whole see and be seen thing doesn't seem to have a lot of purpose other than getting people drunk."