John O’Nolan knows WordPress. He’s a regular content publisher through both his personal blog and his “side project” Travelllll.com. (1, 2, 3, and 4 L's were taken, he tells me.) He also builds WordPress sites for companies like Nokia, his current client. He was previously the Deputy Head of the open source WordPress UI Group during the release of versions 3.0 and 3.1. Given all this, when he says the world needs an alternative publishing platform, I’m inclined to listen.

And I’m not alone. O’Nolan published a concept page for a currently fictional publishing product he calls “Ghost” and the site received more than 80,000 page views in the first two days. A link to the site shot up to the No. 1 item on the Hacker News message board within two hours – it now has 219 comments and 483 points – and WordPress founder Matt Mullenweg was compelled to leave the first comment. A single Tweet about the project received thousands of Twitter engagements in a matter of hours. Put simply, people were listening.

O’Nolan has been overwhelmed by the response and takes it as validation of his thesis. WordPress is strong as a content management system (CMS), he says, and as a website building platform. Where it fails, is as a publishing tool for the masses (John and I debated the meaning of “masses,” a term I feel he uses a bit liberally when meaning those who publish often rather than everyone who publishes.) Tumblr, on the other hand, is too simplistic for O’Nolan’s personal needs and that of his target audience. Ghost would be aimed at delivering where both fall short. And given the early response, there’s an increasingly good chance that it will soon see the light of day.

The fictional product is not something John threw together casually. It’s a culmination of more than a year of brainstorming and open discussions with other designers, developers, and users. The conceptual platform includes a number of features not available elsewhere in the publishing platform universe.

The first thing one sees when logging in is a visual dashboard of analytics data. Lest that sound overwhelming, rest assured it’s both beautiful and highly relevant, functional data. O’Nolan describes it as “All the relevant content about your blog that you want to see every time you log in. Your traffic levels, your top content, your social media stats, how your authors are performing.”

Next, Ghost takes a page from email client interfaces by offering a split-view content manager. On one side, is a list of content items, including title, category, date, and viewer counts. On the other, there’s a preview of a single piece of content. This simple and intuitive functionality that could make using Ghost dramatically more efficient than existing solutions. 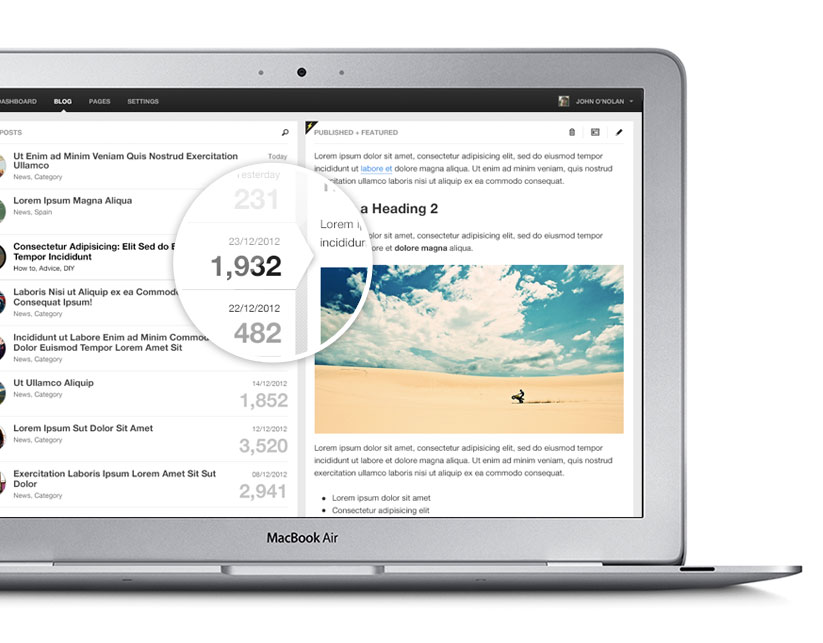 Getting to the meat of the product, the writing screen, the Ghost concept delivers again. Another split-screen interface offers markdown (aka writing and editing) on one side, and preview on the other. The result is that authors never need to leave the writing screen to see how their work will appear. For anyone who publishes regularly, this is a major improvement over the current standard.

Lastly, although not discussed in depth on the concept page, according to O’Nolan the product would have newsroom features designed for managing multiple authors, tracking performance, receiving and distributing leads, and chat. This won’t be the focus of the product initially, but is something the creator is committed to exploring.

There are a few other things that are more philosophies than features. Ghost aims to get rid of many of the lesser used best Wordpress hosting options like admin color schemes and remote publishing. In other words, KISS (keep it simple stupid). And another decision that should please Paul Carr -- no comments, at least not natively. The platform would support integrations for Discus and Livefire, but as a product itself, it’s all about publishing. Finally, the platform will have far fewer plugins than WordPress (by design) and will limit backward compatibility to emphasize speed and forward progress.

So what now for this mythical platform? O’Nolan says that he was looking for a minimum of 10,000 concept page impressions to validate his thesis. Thesis, meet validation, and then some. Now the UX and UI developer and designer is looking for a “technical partner in crime,” in his words, so that he can spec out the development requirements. He’s gotten plenty of inbound inquiries already and has a deep rolodex to tap into, now that the project seems to have some legs.

The first big decision to be made is whether to build Ghost from scratch, fork WordPress, or skin WordPress. The three options represent declining difficulty, but also declining appeal for O’Nolan. His concept page describes the project as a WordPress fork, but the creator says that he hasn’t made the final decision one way or another.

Ghost, should it become a reality, wouldn’t be the only alternative blogging platform to WordPress. There’s Blogger, Blogster, and elitist Svbtle, among others. Few have proven terribly lucrative. Given this, I asked O’Nolan whether he sees this as a business opportunity or as a hobby project. His answer was essentially “both.”

“What I would love most, is that this ends up being something people want to use,” he says. “I’m creating this because I want to use it myself. It’s not about the money, but that doesn’t mean that that won’t be where this ends.”

To that point, he’s not terribly worried about competition either. With the goal being to have a solution like this available, O’Nolan would be happy to see WordPress itself introduce a comparable product or to see one emerge elsewhere out of the developer community.

Ghost’s concept pace describes the project as “100% a not-for-profit,” analogous to Mozilla rather than WordPress' operating company Automattic. The creator pledges that “every decision made would be about improving the software, not the bottom line.” None of this is to say there isn’t a potentially lucrative business opportunity here. Among the inbound feedback he’s gotten in the last two days were messages from several investors interested in discussing the project further, says O’Nolan.

The timing of Ghost’s unveiling was deliberate as O’Nolan says he’s coming to the end of several big projects and finally has the time to focus on something new. He’s been somewhat of a world traveler lately, living for three months at a time in various locals, with his only criteria being good WiFi and good kitesurfing (qualities that would seem to be somewhat at odds with one another). Should the momentum around Ghost continue, the UI guru is excited to put down roots and immerse himself completely into this project.

As an avid WordPress user myself (PandoDaily is a VIP client), and therefore someone intimately aware of its strengths and weaknesses, I'm eager to see this project come to fruition.