That venture capital shakeout is still taking way too long

Lately, I've heard a lot of VCs bringing up how much of their industry is going out of business. As both a member of the press and an entrepreneur, it's hard for me to feel much pity or see it as some great sign of Darwinian health. Mostly, because I've now been writing about a venture capital shakeout since the year after I arrived in Silicon Valley.

This might be the slowest industry reckoning the capitalist world has ever seen. Seriously, Godot got here quicker.

It occurs to me that if I'm going to complain about the pivots and acqui-hires and the overall decrease of actual failure in Silicon Valley, I should start with the part of the Valley that funds it all.

By my count we are more than a decade now into a "shake-out" in venture capital dating back to the excesses of the dot com crash. Yes, it is more real than theoretical after the last few years. Firms have started to go out of business and the concentration of limited partner money is going to a smaller and smaller set of firms. There was one particular quarter last year when just seven funds raised 80 percent of the venture capital.

But that quarter was mostly an anomaly and considering 95 percent of the returns still come from 5 percent of the deals, it seems the VCs are still getting a better deal than their investors.

As I've written before, there are precious few firms who can raise as much money as they want. Everyone else is scrapping. But the shocker to me has been how many firms people keep whispering are DOA that somehow find an LP somewhere in the world willing to give them another shot.

There are two reasons why. The first is that there is just a ton of institutional wealth that has been created in the world. First, in the US towards the end of the 20th century, and increasingly, in emerging markets. When nearly every institutional fund wants to put a tiny percentage of its wealth in the basket of "alternative assets" like venture capital, that just adds up to more money than the industry can really put to work in good ways -- even at current levels.

The second reason is this chart: 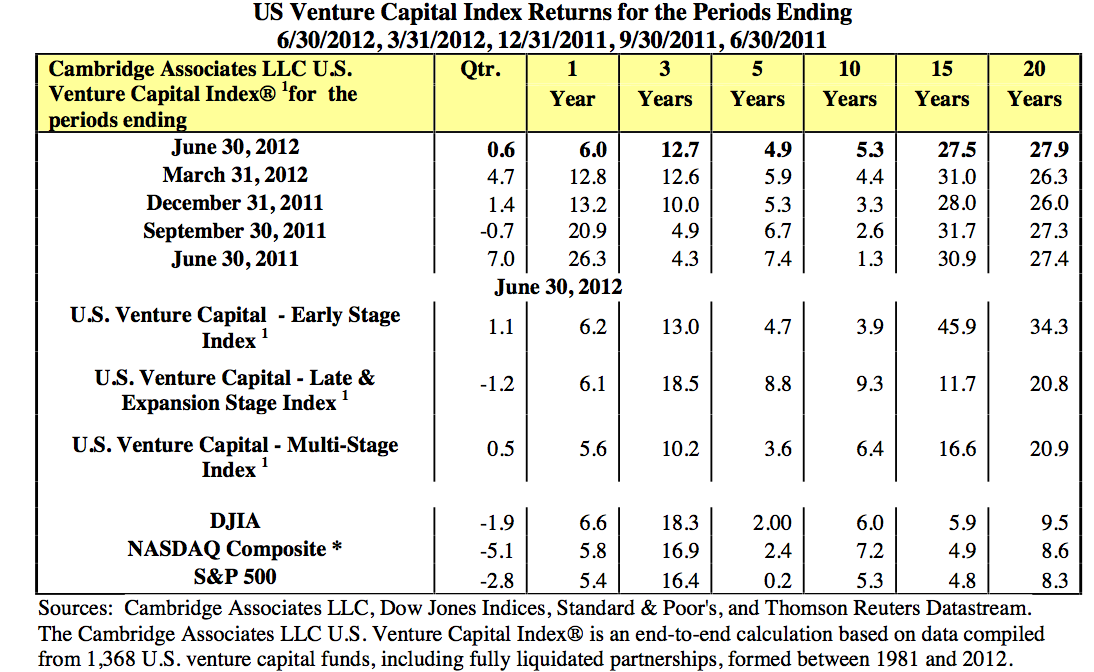 Cambridge Associates, which tracks venture capital liquidity, released its most recent numbers last week and showed that, yep, results are down of late. But their investors measure them in ten-year increments, because the companies they fund take a while to mature and exit. And it turns out that math is almost always forgiving.

For a long time the ten-year index still included the heady times of 1999 and early 2000, so they were artificially bolstered up. Those have only recently fallen out -- about the time the bulk of this actual shakeout really started.

But now, Cambridge proclaims that the anemic post-bubble years of 2001 and 2002 are falling off the index as well. That's causing the aggregate long term numbers to rise again. Are they the best venture capital has ever seen? Not at all. But they're better than the market average.

And that's the thing. We can all talk about "venture style returns," and most people mean making 10 times your cash. But as long as that's the dreamy upside, and the downside is beating the market, investors still keep putting cash in. Even if -- in practice -- most of those firms aren't beating the market. Many aren't returning capital at all. Everyone is just a hit away from dumb money looking brilliant.

In a perfect world, only the firms actually delivering would raise another round. But those good firms are all over-booked. So the rest of the industry's cash goes to the rest or doesn't invest.

VCs acutely feel like a shakeout is real and severe. But that's largely because they've been in venture capital too long. It's an insanely forgiving business, even if you're on the losing end. Firms don't just close down the way a company does. Each fund is a ten-year investment cycle that doesn't end until the last deal has gone public, sold or gone under. They can limp along seemingly infinitely.

Several VCs I've talked to have pointed out that out of some 700 funds that are technically listed as doing business in the US, only 97 of them have invested at least $1 million for four straight quarters in the room. 700 down to 97 is certainly extreme.

But honestly, can you even name 97 venture firms? I write about this stuff for a living and I can maybe name 20 off the top of my head. Remember: This is a home run business and 95 percent of the returns are coming from 5 percent of the deals. Let's be generous and say, at least fifty of those 97 can be putting up what LPs consider venture style numbers.

Clearly 600 firms would disagree with me that a venture shakeout hasn't been severe enough. I don't have a lot of pity for them. Anyone going under in this business has been given at least 10 years of second chances while their portfolio companies suffer far harsher economic realities.