Science launches HelloInsights to identify and optimize influence on Pinterest

As companies increasingly turn to Pinterest as a digital marketing channel, there’s a tremendous need to quantify and optimize its use. After ten months of development and behind the scenes deployment, HelloInsights launches publicly today out of Santa Monica’s Science, Inc. technology studio to measure effectiveness and influence on the platform.

HelloInsights was born out of an internal need for Science’s portfolio companies to maximize their audience acquisition efforts on the photo pinning platform. The company, whose technology was bolstered through the acquisition of Indian analytics startup PinPuff, examines follower counts, pin virality, total reach, and audience engagement to rank pinners in terms of their influence – this rank is determined based on effectiveness rather than audience size. Companies can view the output of this analysis on the HelloInsights leaderboard, and then inform their outreach and content distribution strategies to target these brand evangelists.

In addition to influencer rank, HelloInsights offers a number of content management tools rarely available within a single platform including, most popularly, its pin scheduler. Also, the system offers visualization tools such as a “Live Pin Stream” that displays real-time brand-related activity across the social network. 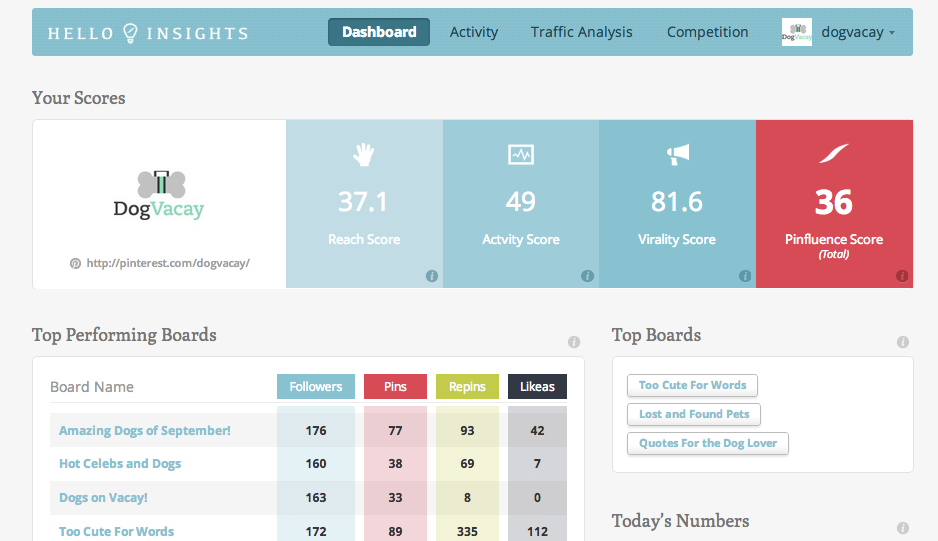 HelloInsights was founded by current CEO Kyla Brennan and added PinPuff founder Gaurav Sharma as its CTO following the June acquisition. The company currently has a 15 person, engineer heavy team and operates out of the facilities of its lone investor, Science, with no current intention of raising outside financing.

Since going live in February, the company has tracked over 1 million user acquisitions, 8 million unique page views, and hundreds of thousands of dollars in revenue for its “several hundred” early ecommerce clients, which include fellow Science portfolio companies and Fortune 500 brands, according to Brennan. Not surprisingly, visually driven product categories such as home decor and fashion have seen the most success on Pinterest, as well as on HelloInsights, says the CEO.

Other startups have looked to measure and optimize Pinterest influence with varying levels of success, but none that I’ve encountered have offered the full suite of solutions of HelloInsights. PinReach (originally PinClout), was among the most well known and used a similar 100 point influence score, but encountered legal problems and sold its technology to an unknown buyer earlier this year.

What no company in the space has managed to accomplish, including HelloInsights, is to successfully monetize its analytics solutions. The Science-backed startup is offering its platform for free to any takers with the popular refrain coming from its CEO being that the company is “emphasizing user acquisition over monetization.” HelloInsights apparently offers additional advisory services around maximizing pinterest effectiveness, but for the technology company to reach long term viability, some form of a SaaS-based seems inevitable.

Despite its own viral growth, Pinterest is still a relatively young platform and brands are largely still figuring it out as they go along. One need only look as far as the US Army’s Guide to Pinterest to understand how true this really is. Much as we saw in the Facebook and Twitter ecosystems, having a proverbial tour guide to deliver best practices and drive campaign efficiency on these social platforms is essential. HelloInsights currently appears to be the best-of-breed in its category and is well positioned to own the market in the immediate future. That said, given the size of the opportunity, the company is likely to be saying “hello competition” with increasing frequency going forward.