Here’s some Friday fun: A dystopian near-future where Apple is embroiled in warfare in China. President Michael Bloomberg and Vice President David Petraeus (yes, that Patraeus, everyone’s favorite new soap opera character) are leading the country through the strife. Yielding to shareholder pressure and a mess of patent litigation, Apple has ditched whimsical consumer design and has turned to producing military drones. And the hacker group Anonymous is still messing shit up.

That’s the reality in Austin, Texas-based author Shlok Vaidya’s new book, "The Rise of Siri," which he bills as a “startup dystopian novella.” (It’s fiction, in case you were wondering.) In some ways, it sounds ridiculous and absurd. In other ways, it sounds intriguing -- though still absurd. In any case, Vaidya’s got a decent following. Matt Taibbi recently said his writing was “really stirring.”

Vaidya took some time to catch up with me, and we chatted about writing “real time fiction,” what the Valley could learn from his book, and who would win in a fight between Tim Cook and Scott Forstall. 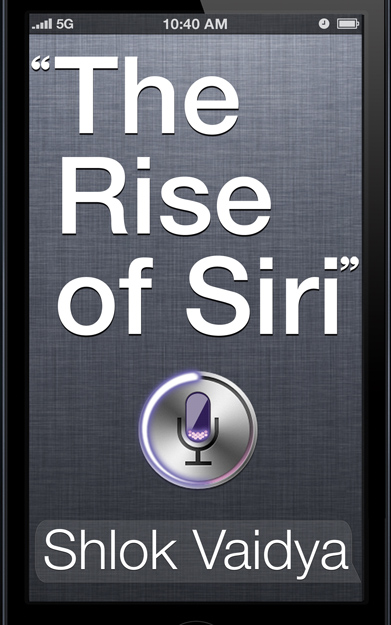 Where did this idea come from?

My background is kind of varied. I was a terrorism analyst and consultant to the military and intelligence communities, working on energy security and information warfare. And then I transitioned into the entrepreneurial world and building out the startup ecosystem in Austin. Those were the two tracks I was interested in: geo-political disruption and entrepreneurial aspiration. So with my fiction, I try to smash those two threads together.

No company has captured our imagination -- and our wallets -- the way Apple has. There’s a mythology there. There’s Steve Jobs, there’s Jony Ive. There’s all that secrecy. It’s filled with assholes and geniuses. It’s a cult of personality. It was much easier as an author to take this mythology that they already have, and put them in a future that isn’t all about breathless product announcements, but also about pride and anguish.

What was it like trying to fictionalize these characters?

I sent a few emails over the last two days and the subject is, “You’re in 'The Rise of Siri'.” In their role as a public figure, they have to own that to some degree. It was just a matter of time before they’d be fictionalized. I tried to keep them as close to the public perception as possible. If I do get a response, it will be interesting to see who they are behind closed doors. Like, in the book, Forstall’s an asshole. He’s probably an asshole in real life [laughs].

But it’s flattering, right? You’re in a book. You matter, and now you’re in fiction, and that’s cool.

Some people call it “real time fiction” because it’s that kind of near future. It was really interesting writing this in today’s environment, just because stuff was changing so quickly. In the weeks before the book came out, I had to deal with Forstall getting fired, which I hadn’t expected -- this early anyway. And he’s a major character in the book. Then General Petraeus resigned. [Because it was an ebook, and not in print, Vaidya was able to make minor plot changes to make it work.]

You lucked out with Petraeus’, uh, newfound cultural relevance.

That was really timely. The simplest thing was tagging books with the term “Petraeus” on Amazon. That’s actually driven quite a bit of traffic. Because people are looking for Petraeus books.

So who would win in a fight? Forstall or Cook?

I’m gonna say Cook. You hear these stories, and he’s so calculating and cold, and he’s driven by numbers, whereas Forstall is a design thinker. But in that battle, you can just see Cook outmaneuvering Forstall. It is a battle, but in the end I think Cook wins.

Can Silicon Valley learn anything from the book?

If you’re in the heart of this amazing factory that generates ideas and value, its kind of hard to look out the window and see that there is other stuff happening that can fundamentally change the way we do business [human rights criticism in China, or hacks from groups like Anonymous, he says], but you can’t see it because you’re hustling all day everyday to get the investors you want. And so this lets you pull away.

Have you heard anything from Apple?

Not yet. I’ve been trying to poke them to get some kind of response. As far as that, I’ve submitted it to the iBooks store but haven’t gotten anything back yet. I’m hoping they’ll accept it [laughs].