Can Knotch turn the social network into a marketer’s dream?

Since the dawn of social network time, marketers have been racking their brains to figure out how to harness and use the opinions that people freely publish on their social media pages. The yet-to-launch startup Knotch thinks it may have the answer: Create a social network solely based on how much a user likes or dislikes something.

With Knotch – which officially opens for business in early December – a user logs on and sees a set of topics: Apple maps, Obama, tea, etc. The user then sees a color spectrum from blue to red – blue means cold (or “bad”) and red means hot (or “good”). Tealish green means, “Meh, it’s not horrible, but still pretty bad.” There’s also a field to leave a written comment to explain your decision. If you don’t see a topic you are interested in, you can create your own. In a clever turn of self-awareness, the topic “Knotch app” appears in my demo version – it got mostly reds and oranges.

For users, it’s a fun way to gauge friends’ opinions: Is this movie worth seeing? Is texting while on the toilet socially acceptable? For marketers, though, it’s a treasure trove, and a way to meaningfully tap the interest graph. Knowing a user’s quantifiable, organizable thoughts on a topic are worth big bucks in focus grouping and consumer testing. And it’s an area where Facebook and Twitter, for their wealth of volume and monstrous user numbers, just havn’t been very helpful. “What does a ‘Like’ mean in today’s world?” says Anda Gansca, the company’s co-founder, who also has a background in data science from Stanford. 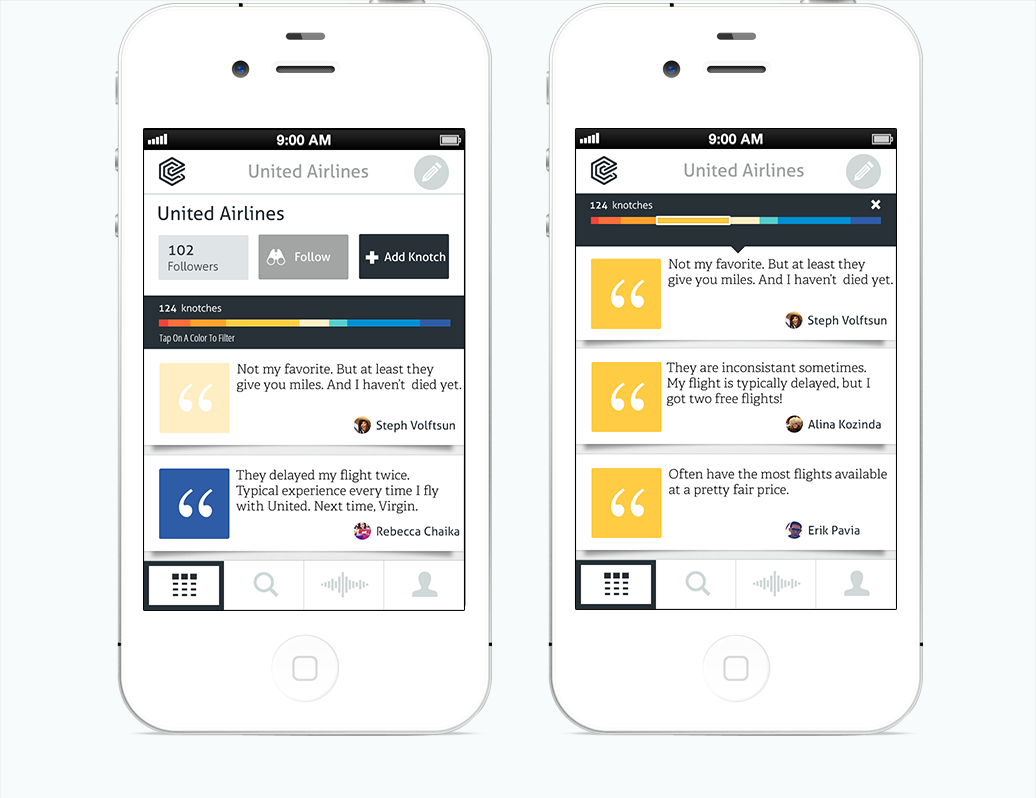 Marketers aren’t quite invited to the party yet. Gansca says she’d like to keep them out to build up the user base before inundating them with brand specialists. The important thing is to maintain the authenticity of the network, and nurture an environment where users can be honest about their praises and grievances. The way to do that, Gansca says, is to be very upfront. “As opposed to everyone else who is secretly trying to use their data, I want to co-own the data with the user and allow them to make money off it,” she says. One way that could work would be offering users a 50 percent discount if they choose to Knotch their opinions on a new Starbucks latte. “We want to make the Internet cater to you,” Gansca says. “And why wouldn’t you want that?”

The whole basis of the app is based on a genre of data-mining called “sentiment analysis.” It’s not new, and third party companies like DataSift do the same sort of thing with tweets and status updates. But the cleverness of Knotch is the consumerization of the dry and inside baseball-type topic. Getting a user to voluntarily come and give her insight is no small feat, and Knotch has created what marketers can view as a social focus group.

The keys for Knotch will be traction, breadth, and diversity. An empty network will do the marketers no good. Neither will one just filled with men, or just women, or just Danish, or young, or college-educated people. Right now, the audience is mostly women, says Gansca. Adoption will have to mushroom in coming years for the network to become invaluable to marketers. It might also do Knotch good to allow marketers to manipulate and view data in more ways than are available to the normal user. A model like LinkedIn’s – where employers have vastly more knowledge and flexibility in a premium service – could be a good example to imitate.

The company will need to mature before brands can really take it seriously, but if the company takes all the right steps, marketers might be willing to score it – in Knotch’s color-coded system – bright red.