It’s not every content portal that can claim funding from two of the premier venture capital firms in the Valley. But High Gear Media can do just that, having raised $12 million over multiple rounds from Accel Partners and Greylock Partners, among other investors. Earlier this week, the company that competes with Car and Driver, Road & Track, and Motor Trend launched an improved iOS mobile app that has the potential to dramatically disrupt the automotive media industry.

The traditional print incumbents in the category offer content via iOS, but do so in nearly all cases through the Newsstand and behind a paywall. Digital-only High Gear is now offering 100 percent of its content for free via a universal iPhone and iPad app. High Gear operates several Web properties including review and listing site TheCarConnection.com, green vehicle site GreenCarReports.com, and luxury and performance vehicle news destination MotorAuthority.com.

Each of these properties creates and publishes its own editorial and premium video content, as well as syndicate its content across partner sites such as Yahoo Autos, The San Francisco Chronicle, and Glam Media. It’s the Motor Authority brand that’s getting the app treatment. 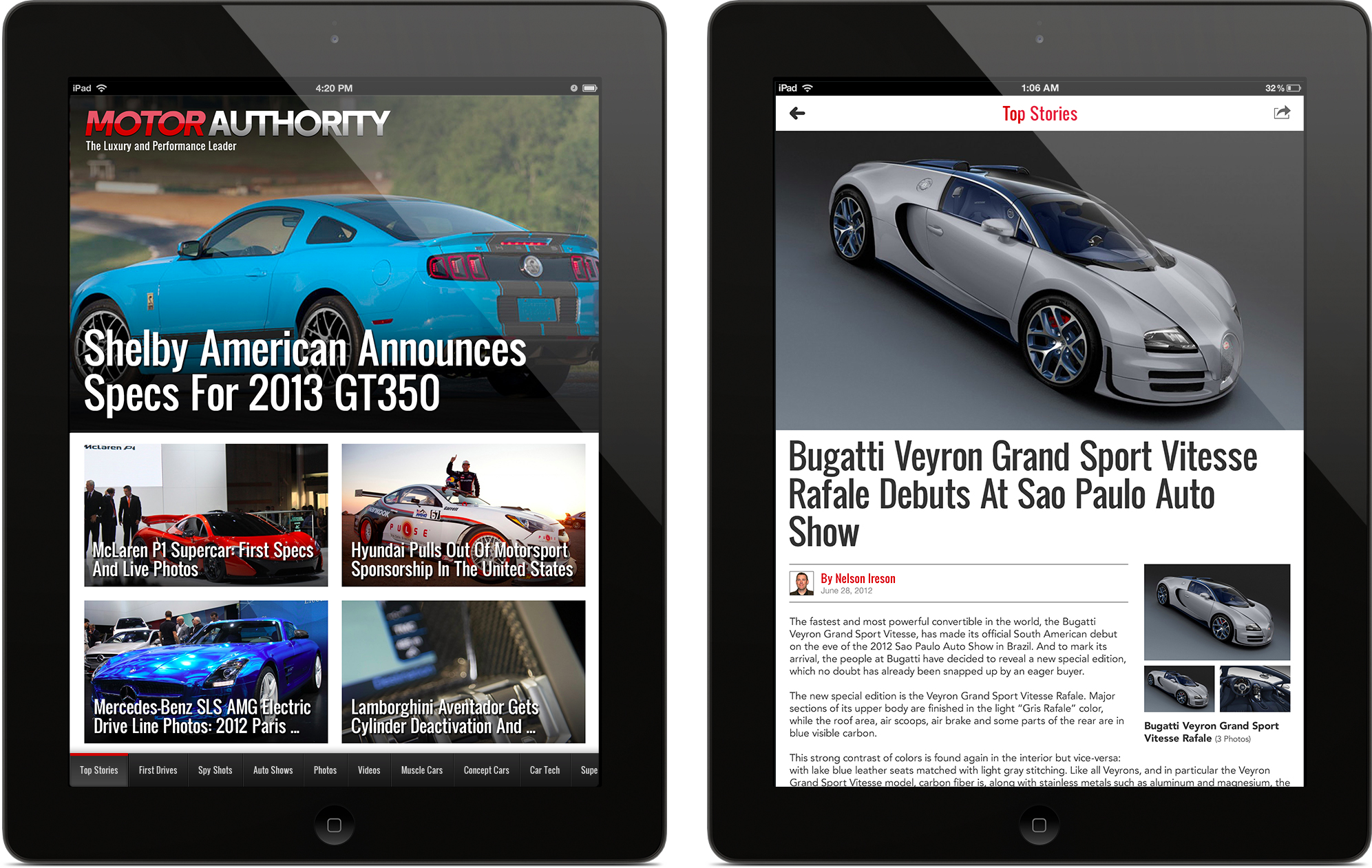 Across its entire ecosystem, the company sees more than 5 million monthly viewers and is ranked in the Top 10 by Comscore in the Automotive category. The app launch could not come at a better time for High Gear, as the company has seen mobile Web user growth of 150 percent over the last year and similarly increasing inbound consumer requests for a native app.

Showing that its audience is equally as active on social media as it is on mobile, Motor Authority recently crossed 100,000 Facebook friends amid 100 percent annual growth in that regard, while the entire High Gear ecosystem totals more than 200,000 followers on the social network.

These figures put Motor Authority on par with industry 800-pound industry gorilla Edmunds, which itself just crossed 100,000 followers, and suggests parent company High Gear is in a commanding position to address its target audience through the social channel. As social media becomes increasingly important in driving audience to digital content, this lead will become more and more valuable.

Interestingly, there's no clear leader in the automotive native mobile app category, with the most downloaded being Car and Driver Magazine, a paid app with approximately 164,000 downloads accodring to XYO data. High Gear could conceivable cross that threshold quite quickly given its free pricing model.

Collectively these social and mobile trends are not unique to High Gear but represent a theme across the content and commerce ecosystem. An increasing percentage of digital content is consumed on mobile devices – 22 percent and rising – and digital content is increasingly being used to drive commerce. As many ecommerce-first companies have found, mobile revenue is quickly catching up to mobile engagement.

High Gear CEO Matt Heist, who previously worked at Sidestep.com, and before that at Yahoo, recently discussed his observations and recommendations in a contributed post on PandoDaily. In it, he suggests blending traditional with promoted content, geo-targeting advertising, incorporating transactions into editorial content, and restructuring costs from print to mobile publishing – the company will employ each of these strategies in one form or another within the MotorAuthority app. Like Heist, High Gear Founder and Chairman Hesky Kutscher is no digital slouch, having previously founded and ultimately sold ShopLocal to Gannett in 2004 for $75 million.

The takeaway seems to be that those media companies native to the digital realm are best equipped – and most willing – to adapt to its unique demands. High Gear’s decision to buck industry trends by giving away its content for free is one example of this progressive mindset. Its recent growth suggests that the initiatives are working and that those who have not yet embraced the mobile audience would be well served to adapt.