Manish Chandra is a bit like the LA shoe and diaper kingpin Brian Lee. He's a middle aged dude who has an almost uncanny insight into what drives women to shop.

He describes his company's online shopping swap parties like a violent real world sample sale. "My investors couldn't understand this, but it wasn't like a nice boutique open house where people sip wine and look around," Chandra says. "This was like 'Get out of my way, I want this!'" He pantomimes women elbowing one another -- with a technique I swear I've seen women use in the wild. (Not me, of course...)

When Chandra talks about his company, he even sounds a bit like, um, a girl. "This is so deep and so core. It's tied to every emotion," he says. "It's vanity, ego, confidence and love. I tell the company what we're really selling is love. And we know how to monetize the love."

Like a scene from that awful Mel Gibson movie "What Women Want," Chandra has found himself captivated with his wife's closet. He examines what sits there unworn, with tags sill on it and what gets more heavily used. His comments on fundraising similarly sound like they could be from a female entrepreneur support group: "Raising money for a fashion startup is hard," he says. "Most of my investors are men. They don't get fashion. They turn to their wives or their admins, but neither of those are great data points."

Well, apparently, it wasn't too hard. Chandra's company-- Poshmark-- is announcing a Series B round of funding today of $12 million lead by Menlo Ventures. Existing investors Mayfield Fund, Inventus Capital, and SoftTech VC also re-upped with this round. The money will be used to build versions of Poshmark on Android, the iPad, and the Web.

As we've written, you need traction to get a Series A or Series B these days. "Traction" is an annoyingly vague word in Silicon Valley, that's a bit like pornography: Investors simply say they know it when they see it. Here's what traction meant in Poshmark's case: Users engage an average of seven times a day and an average of 25 minutes per day and there are two million likes and comments left every month, signaling a thriving social community on top of the commerce. And if you look at the aggregate asking price of things uploaded to the market place, Poshmark is on a run rate to carry some $100 million of inventory at any given time-- and since the items being sold are second hand, that's at a 70% discount to what those items would go for at retail.

I ignore most of the press release and embargo requests that come in, but SoftTech's Jeff Clavier pinged me about the company last week, saying, "Poshmark has a level of engagement and transactions that I have rarely seen in my portfolio. It's an awesome example of what it takes to raise in this environment." An advisor to the company, James Currier, pinged me as well saying, "One unique thing to notice is that his vision about what women want  -- and what motivates them about fashion -- has been 100% on from the beginning.  It was weird to watch it play out so spot on, given that he's an East Indian male who used to be in enterprise software." (Disclosure: Both Menlo Ventures and Currier are investors in PandoDaily as well.)

To my knowledge Chandra hasn't taken it this far... yet: 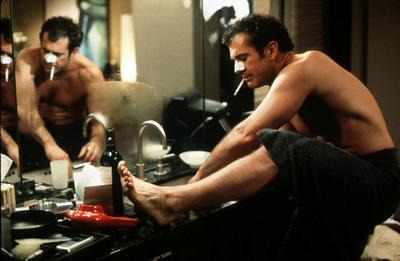 I needed the prodding to check it out. At first blush, Poshmark is like a lot of a rash of companies that seek to find people to buy stuff in your closet. I feel like Erin Griffith writes about one of these a week. We all get the widely-held desire to clean out our closets and repurpose what we don't wear into new stuff we actually want. But the big challenge with these places-- as our intern Sophia discovered last summer-- is liquidity. We posted all kinds of stuff on different exchanges. No one wanted any of it.

Poshmark seems to have done a better job cracking that, although Chandra wouldn't divulge details on revenues or users. Without that it's a bit hard to know.

But there's enough lightening around this concept that someone is sure to catch it in a bottle. The world is certainly ripe for a new huge multibillion ecommerce company. The last ones were pretty much the only ones-- eBay and Amazon. (Zappos just barely got over the $1 billion mark with its acquisition by Amazon, and it was still losing money at the time.)

Poshmark seeks to replicate a lot of the early eBay magic. He doesn't want to touch inventory and wanted to build something scalable. At its heart, Poshmark is mostly a software play. That's fitting since it's one of the relatively few serious ecommerce plays coming out of Silicon Valley. This wave of ecommerce 2.0 has been dominated by companies in New York and Los Angeles, which makes sense given the content and celebrity marketing angels this time around.

The analogy fits to a point: Fab has raised hundreds of millions in capital and is losing money on most orders. Poshmark makes money because of this eBay like model. It has a lean 20-something employees and no angst over whether or not to drop-ship and how to build out warehouses. (And Etsy, too, is gunning to be the modern eBay, although by tapping into a totally different set of passions.)

It's not an accident Poshmark raised this round from Menlo Ventures-- also the investors in Fab and one of the best companies to exploit mobile commerce to date, Uber.

From the consumer point of view, Poshmark works similarly to how you'd expect a modern eBay to work. Women upload pictures and descriptions of things in their closets. They sell them-- for a fixed price, unlike eBay. Poshmark emails them a shipping label, they print and affix to a basic post office box. Poshmark tracks the purchase and knows when it arrives, at which point the recipient acknowledges the acceptance and the funds are released to the seller. Returns work much the same way, but in reverse. iPhones allow the barriers to uploading and shopping to become so dramatically reduced from the Web first days, someone has to be able to build a big business here.

There are a few key differences. Poshmark controls the shipping process more carefully, and the advent of mobile makes the uploading and shopping experience dramatically different. Chandra knew image capture would be a crucial part of encouraging emotion and community on the platform, and he struggled over the most cost effective way to make sure millions of women throughout the world could take great photos of their stuff.

The second he saw Instagram, he knew it wasn't an issue any longer. Where uploading a photo to an eBay listing was something only power-sellers did, the average Poshmark user is creating magazine line displays of their items intuitively from their phones. Think of espadrilles dangling from a beach chair in front of  the ocean, or a lookbook-like display laid out on a white carpet of how this hat could be styled. And women are consuming Poshmark on their phones as well, making it easy to instant shop hot closets from anywhere.

The curation angle-- after all, every ecommerce 2.0 startup has one-- is similarly user-generated. It comes in the form of Poshparties. There are three of these a day: In the morning, they are themed around designers in the mornings, categories of goods in the afternoon and trends in the evening. (Think, Diane Von Furstenberg, handbags and leopard prints as examples.) Women upload or repurpose existing listings that fit within the themes, and other women raid their closets in real time. A lot of those two million monthly likes and comments show that rage, exasperation, jealousy, and thrill of the hunt. The evening Poshparties have 30,000-40,000 items on average.

They've thrown a few physical Poshparties where women gush about the app. There are the stories of women who've quit the jobs to sell on Poshmark full time, women who no longer go to the mall, women whose boyfriends are jealous because all they do is talk about Poshmark. All good signs, but again macro user numbers would be nice to indicate how broad the passion goes, not just how deep. Nearly every app has its hardcore fans.

The biggest difference from eBay is that Poshmark has no desire to make fashion a mere "vertical." Fashion is everything for the company. It's another concept that Chandra says he has a hard time explaining to many of his "male investors."

He points out that fashion is a $300 billion market in the US and more than $1 trillion globally and that the richest men in Sweden, Spain, France and Japan are all in fashion. Three of those-- the founders of H&M, Zara and Uniqlo-- have all done it in the churn and burn, fast retail space. Those stores are essentially a flash sale in physical retail locations, and have so far done far better than the flash sale equivalents online, no matter the Web's supposed superior economics and reach. Score one for the revenge of brick and mortar. (The fourth is LVMH's founder.)

Of the top ten richest men in the world, three are in fashion-- the kingpins of those three discount dealers. Only two are in technology-- Bill Gates and Larry Ellison. One is in telecom. One is in real estate one is in oil and gas, and one is in the grocery store business. Chandra's point: There's plenty of cash in fashion, and that's where the community, intensity and emotion of a online social network is as well.

With numbers like that, you can see why he's captivated with his wife's closet.

But his conviction to build Poshmark into a big company goes beyond flipping through a copy of the Forbes billionaire list. Chandra's previous company Kaboodle sold to Hearst in  2007 for some $30 million. It was a social shopping site and in many ways an early progenitor to a lot of the things that Pinterest does today-- it had some of the very same early boards as Pinterest. One of the reasons Chandra sold is that he just couldn't see how it became a much bigger company.

When he first met with Pinterest's Ben Silbermann, it was clear that Silbermann got what he hadn't. Forehead slapping moment. Double forehead slapping moment, because Chandra was bound by a non-compete and couldn't even advise or invest when he saw it the second time. He's since become convinced that anything that's a good business has the potential to be a $100 billion business.

This time he sees it, and he's not settling for $30 million.