With Nielsen Deal, can Arbitron step into the digital age?

This morning TV ratings company Nielsen announced it purchased Arbitron, a radio measurement company, for $1.26 billion. The deal combines to two mature, slow-growth businesses. But one is more resistant to the digital age than the other.

Nielsen uses old-school ways to measure its TV audiences that include measuring small percentages of panels, extrapolated out to the entire population of TV owners. The company has applied that philosophy its measurements of the web as well. But the important thing here is that Nielsen isn't entirely blind to the web, as evidenced by the company's announcement yesterday that it would partner with Twitter to get a better understanding of reach and engagement of TV viewership. It's a bold acknowledgement that, hey, this online thing has legs.

Many web analytics startups would scoff at the idea that Nielsen is forward-thinking in its measurements; that doesn't really matter when you're the industry-leading conglomerate that the world's largest media companies subscribe to. What matters is that you're even open to it.

For a contrast, look at Arbitron's sentiment toward digital radio. The company found itself embroiled in ugly, public fight with Pandora about audience measurement. Last year Pandora, which represents as much as 7 percent of all radio listening, realized that, in order to sell ads to traditional radio buyers, it needed to present its listener metrics in a way they were used to. In other words, Pandora needs to compare its audience to a traditional radio audience. Arbitron refused to legitimize Pandora's comparable metrics, citing some arbitrary difference about "one-to-one" versus "one-to-many," and Pandora released them anyways.

That did not go over well with the traditional radio guys, who called the comparison "frightening," (Drew Horowitz of Hubbard Radio) and said it "makes absolutely no sense" (Bob Pittman, CEO of Clear Channel).

Arbitron also weighed in: "Arbitron urges those reviewing audience estimates from Internet music services not to make direct comparisons to Arbitron audience estimates in any market." The funny thing is, online, Pandora's audience estimates are not estimates at all. Arbitron's are because they're derived from samples of people who wear a "Portable People Meter" that tracks their media consumption all day. Pandora's are real exact numbers -- the beauty of the Internet is that we can get that data.

“Broadcast radio companies are clearly afraid of what an accurate apples-to-apples measurement with Internet radio will show to radio,” a Pandora spokesperson said at the time. I'm not one of those "Internet will kill radio!" people -- and I know it's always more complex than it looks from the outside -- but the entire debacle made Arbitron look like a dinosaur that's scared of change.

Pandora eventually got Arbitron competitor Triton on board to verify its audience numbers. Now that Arbitron is part of Nielsen, perhaps the company will consider easing its anti-digital policy. Why has it been so opposed to measuring Pandora anyways?

Aside from loyalties to its traditional radio customers, Peter Kafka of AllThingsD pointed out one possible reason: digital measurement just isn't as big of a business as offline ratings. Digital market leader comScore only made around $232 million last year and its market cap is under $500 million, compared with Nielsen and Arbitron's $6 billion in combined revenue. Perhaps because there are lower barriers to entry and more competition. Perhaps it's because comScore spends more of its time suing startups over old vague, patents than providing tools customers want.

In digital radio especially, the market is very young and the ad spend is taking some time to move over. Last year digital streaming pulled in an estimated $800 million, compared with a $16 billion traditional radio ad market. See below for a (somewhat dated) visualization of listening hours. 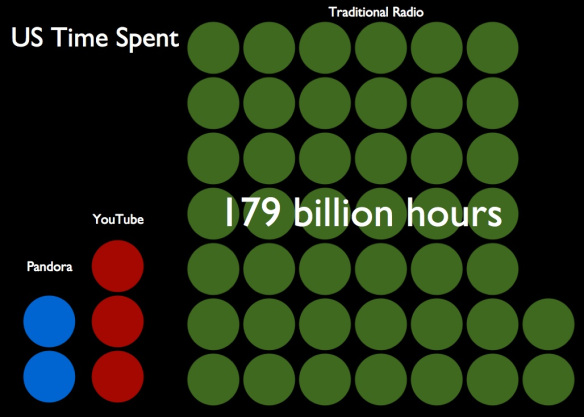 Pandora and TargetSpot are probably the biggest two holders of digital streaming inventory. Clear Channel's iHeartRadio doesn't have any ads yet. And Spotify's radio functionality is just that -- one small function of its overall business, so the company sells ads more like digital units than like terrestrial radio spots. It's a market that's still young enough to be figuring things out. With a new owner and possibly new attitude, Arbitron could be there on the ground floor.