Given the immense power of the always connected, location-aware computers that the majority of us now carry with us at all times, the way we coordinate our social lives is archaic. Users who want to know what’s happening and who will be there still need to visit a half dozen different services, ranging from social networks to events databases to email, SMS, and chat platforms. In the past, apps like Wendr, GiddyUp, Bonfyre, and dozens of others have tried to improve the last step of the process, planning, or coordination. But as only partial solutions that break down when looking for interesting things to do, they haven’t gotten much traction.

GonnaBe is a new platform coming out of a stealthy public beta today to best each of these previous solutions. The startup, which launched out of Westwood accelerator StartEngine, offers a radical new interface that combines the social calendars of a user’s network of friends with local event and promotion calendars. The end result is a stupid easy and addictive way to figure out what everyone is doing, and equally as important, what they should be doing. 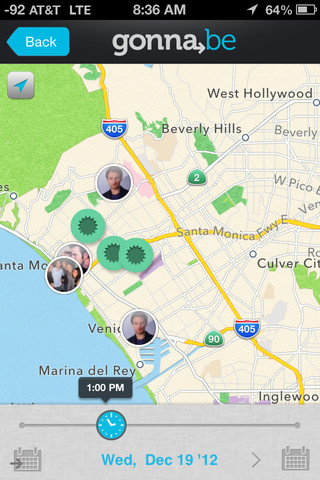 The key to GonnaBe is its Temporal Mapping interface, making social and event calendars scrollable on a map according to date, time, and location. Founder Hank Leber compares it to a “social weather map,” where plans and people pan across the screen, visualized across time. Users can look a few minutes or a few hours into the future, up to weeks or months ahead.

The iOS app nails the SoLoMo (social, local, mobile) trifecta in a way that isn’t forced or superfluous. Unlike many of apps laying claim to that moniker-of-the-moment, GonnaBe’s social, local, and mobile aspects each add significant value to the user experience.

GonnaBe’s biggest challenge is user density, aka the “empty room” issue. As Color and other failed social media companies have shown, social apps require a network effect to be valuable. GonnaBe is focusing its initial outreach efforts on college campuses, beginning in Los Angeles. With a few dozen volunteer interns on the UCLA, Loyola Marymount, and Pepperdine campuses, the company accumulated 1,200 beta users in the fall semester. Having taken their data and feedback into account, the company improved its app and is now ready for primetime.

In addition to the impressive temporal mapping interface, GonnaBe has focused on event discovery in recent weeks, beefing up its content offerings. Initially, this meant incorporating local offers like restaurant lunch specials and 2-for-1 drink deals at bars. Now, Leber is calling on his experience as an award-winning digital advertising executive with McKinney and Team One to score some major brand partnerships.

GonnaBe signed a rare data partnership with Ticketmaster and LiveNation, enabling the startup to populate its app with all the thousands of concerts and events around the US and allowing users to purchase tickets without ever leaving. The company signed a similar partnership with Brazil’s Skol beer, a division of Anheuser Busch, to create a white labeled “Plan Your Skol Night Out” app in conjunction with the company’s more than 6,000 events held each year.

Leber promises that there are several more exciting partnerships in the works, which he expects to roll out by this coming Spring. Brand partnerships appear to be the most interesting and lucrative monetization opportunity for the company, as GonnaBe may have more relevant real-time, local, intent-based data than any other platform out there. If the company can manage to achieve network scale and demonstrate attractive conversion rates for partners, the possibilities are significant.

GonnaBe has filed several patents for its user interface designs, including both Temporal Mapping and a unique one touch calendar event creation matrix. The big vision for GonnaBe goes beyond event discovery and planning. The company is already working on machine learning-based algorithms that will one day “know what you and your friends like to do” and then suggest relevant events like a social concierge. At present, GonnaBe is no slouch, however, promising to centralize our otherwise scattered and disorganized social lives.