This morning my husband woke me up by saying, "Guess we can never use Zipcar again." Even in my groggy state -- and I am not kidding, you can ask him -- I replied, "Oh, did Avis buy them?"

That's how much I loathe Avis. As far as I'm concerned they only "try harder" to piss me off. And thanks to a tightly controlled oligopoly, the rest of the rental car world isn't much better. There's little innovation or even need to innovate, when a few players control the entire market.

That's a big reason insiders have been so excited about the launch of Silvercar -- the very young presumed "Uber" of the rental car space. But Zipcar has made more inroads into this oligopoly than anyone. And now, it is part of it. Call me a cynic, but with the biggest disrupter gone and all the others still fledgling, it's hard for me to believe Avis-- not a tech company by its DNA-- will continue to push the envelope on making the service even better.

As it turns out, others have their own reasons to hate the deal, of the dead presidential variety. No sooner did it come out than there were reports of a shareholder lawsuit, since the deal was priced below the 52-week high, and, as Peter Kafka detailed, VCs aren't getting anything close to what they could have made if they'd sold just after its IPO. (Although, there's no indication they weren't fans of this deal.)

Meanwhile, I can't imagine the bevy of ride-sharing companies feel great about it either. When Getaround launched at TechCrunch Disrupt in May 2011, a key comparable they touted on stage -- and in subsequent fundraising conversations -- was Zipcar's then successful IPO. Check out how it has fared since that time: 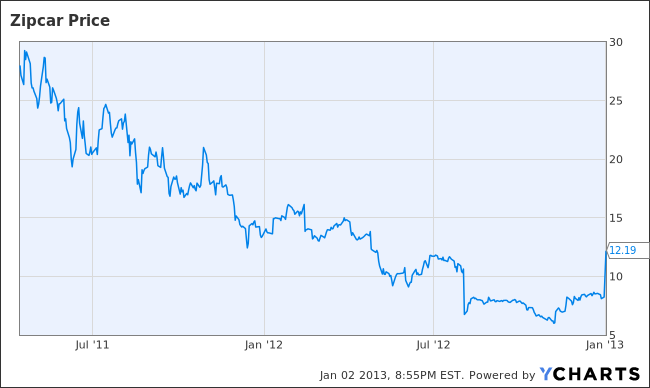 Sure, Zipcar lost substantial value before this deal happened, but that could always be chalked up to a public market that hates consumer tech right now. With a $500 million acquisition, Zipcar is capping how valuable it will ever be. And it's certainly less than the market hoped-- otherwise its own VC backers would have sold at those headier prices.

Getaround's co-founder Jessica Scorpio was quoted in the world's-most-softball-Q&A today saying this deal was-- not surprisingly-- great for all ride sharing companies, while playing up the differences between the two models. While they are indeed different, it's a bit disingenuous for Getaround to use Zipcar as evidence of potential market validation when it's worth more than $1 billion, but not when it sells for half that amount. And, sorry, but I don't buy the market leader's price being more than cut in half is "good news" for an industry. Either Zipcar's stock price is relevant to you or not: Pick one, but not both when convenient.

I know services like Uber, GetAround, Lyft, SideCar, and the new and potentially exciting Silvercar aren't direct competitors, and all do slightly different things. But the same way Facebook's value effects everything social, so too, does Zipcar impact a bevy of companies in this still unproven and emerging trend.

It's a bummer for me as a consumer too. Zipcar was really a pioneer in two trends: Using the Web to disrupt the real world, and the end of ownership, or the ability to live your life by only borrowing possessions. That's continued with the increase in streaming movies eating into DVD sales, the growth of Airbnb, and even textbook rental companies like Chegg.

It's a shame that this was all the mojo Zipcar could muster after such a long slog at doing something really hard, and that the rental car oligopoly has taken out the biggest disrupter.