Yes, it does matter that Samsung announced an Evernote-equipped refrigerator

Gadget reporters are a fickle bunch. The same people who get excited about the Internet of Things and the blurring distinction between the online and offline worlds had a field day with Samsung's new, Evernote-equipped refrigerator, even going as far as calling it the worst thing ever.

That's something we're going to have to get over if the bridge between our online gadgets and our offline tools is ever going to be built. Some things, like adding an LCD monitor to a refrigerator, are easy to mock – especially when the price is revealed – but these are simply the casualties of our first foray into truly connected appliances. This is the beginning of this transition and, well, things are going to be a little messy, overpriced, and at times, silly.

Let's not forget that cell phones didn't always look like the glass- and aluminum-covered slabs that they are today. Cell phones used to be ugly things, off-brown behemoths that looked like someone had ripped a corded phone off the wall, made it a little bigger, and then shoved it in their briefcase. These things were bad, and it took decades to reach the point we are at now.

The same will hold true of connected appliances, tools, whatevers. This isn't about shrinking the computer until it fits in our pockets or moving from the rotary to the touch-screen. This is about finding a way to connect the things we use every day and making them work better with the rest of our increasingly digital lives. 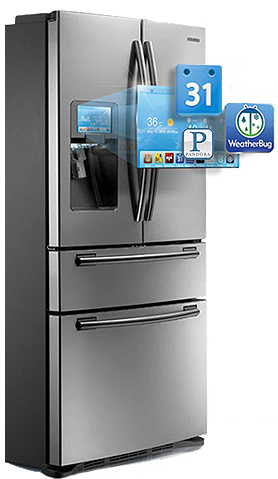 Samsung's digital fridge has an 8'' touch screen, WiFi, and apps.

Nest paved the way for thermostats. As soon as I purchase a home I'm going to install a few of the devices, because being able to control my home's temperature via my phone and having a "smart" thermostat is more appealing than the old knob-turning, Honeywell-built thermostats of old. Other companies can benefit from this shift – Nest did the heavy lifting of proving that the market exists, and now Internet-connected thermostats make a lot more sense.

Smartphones and the Nest thermostat both offer obvious advantages. Want to talk to someone wherever you are, or play a game of "Angry Birds" on the bus to help ignore that creepy guy who keeps staring at you? Go for it. Want your house to be warm when you get home without having to worry about heating an empty home or running out of fuel while you're away? Nest has you covered.

Refrigerators, washers, dryers, and other appliances don't have the benefit of obviousness. (Or, the benefit of the iPod co-creator Tony Fadell designing them.) It's hard to argue that these things can't be improved by the Internet – name one safe-for-work item that works better, because it isn't online. But finding the exact brilliant use case of a Web-enabled dryer may take time. If we celebrate startups for iterating, why punish Samsung for it?

Samsung is at least testing the kitchen. It's easy to make fun of its new refrigerator, and it will probably be easy to say "I told you so" if or when consumers balk at its presumably sky-high price tag. But CES isn't about showing off what mass consumers want. It's about showcasing innovation, too. This device is important, if only because it shows that the Internet of Things concept is being as carefully considered in corporate boardrooms as it is in geeks' fantasies.