Brian Chesky: I lived on Cap'n McCain's and Obama O's got AirBnB out of debt

When Brian Chesky and Joe Gebbla founded Airbnb, it was anything but an overnight success. The pair created the company accidentally as a way to make money during a sold out convention in San Francisco – it was initially called Air Bed and Breakfast, and was literally based on inflatable air mattresses and Pop-Tart continental breakfasts. Chesky shared the story of those arduous early days during tonight’s PandoMontly fireside chat with Sarah Lacy.

After nearly a year of trying to build their not-quite-yet-a-startup, the pair were collectively $40,000 in credit card debt and trying to recreate their one weekend magic of that initial conference. They had a few hair-brained ideas along the way, that probably shouldn’t have worked. But, against all odds, it was the most outlandish initiatives that made the biggest impact.

The event that marked the turning point in the business was the 2008 Democratic National Convention (DNC) in Denver, Colorado. The pair saw an opportunity to capitalize on the quadruple over-attended event that caused a massive shortage in rental housing. Finding hosts to offer up rooms in their houses was actually the easy part. Getting people to rent those rooms proved more difficult.

The first counterintuitive strategy was to pitch only the bloggers with the smallest audience possible. Chesky described them as “Ninth graders, with three readers.” The thinking was that the less successful these writers were, the more likely they were to give the young company the time of day. 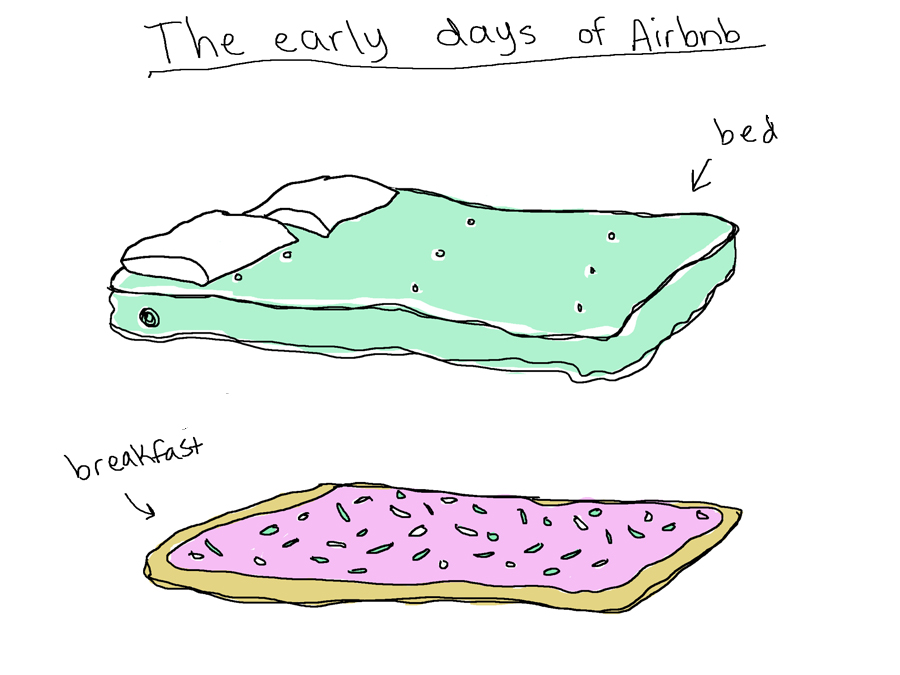 As ridiculous as it sounds, the coverage by these bottom-feeder press was the social proof that more prominent publications needed to piggyback on the story. Eventually, national news networks, including NBC and CBS, were interviewing the founders of the unknown startup that was housing the biggest political convention in history.

The DNC bump was great for business, but it only lasted a week. The founders were desperate for a way to extend the impact of the event. While sitting around their kitchen table one day, still extremely broke, they came up with the idea that would bring Airbnb to profitability: cereal.

Both designers who graduated from the prestigious Rhode Island School of Design, the pair created fictitious cereals called “Obama O's, the Cereal of Change,” and “Cap’n McCain's, a Maverick in Every Box.” They designed the box artwork themselves and convinced a student at UC Berkeley to print 500 units of each box on the cheap. The boxes were delivered as flat rectangles that had to be cut and assembled by hand.

“I was thinking at the time, that Mark Zuckerberg was never hot gluing anything at Facebook – so maybe this is not a good idea,” recalls Chesky.

The founders sent boxes to hundreds of the most well-known tech bloggers, hoping that they would proudly display them on their desks and that they, or their colleagues, would eventually write their story. Shortly thereafter, they started selling the political cereal at $40 per box. The Obama O's sold like hot cakes, so much so that they had to give out Cap’n McCain's for free with each purchase.

In the end, the pair remarkably sold more than $30,000 worth of themed cereal, nearly pulling themselves entirely out of debt. Chesky had to convince his mom at the time that he was still in the short-term rental business, and not running a cereal startup.

The cereal would reappear in several pivotal moments between this period and the time they finally “made it.” First, the 300-plus boxes of leftover Cap’n McCain’s carried them through the hunger starved period before they finally got their first outside financing. Later, it was the final bit of evidence in convincing Paul Graham to accept them to Y-Combinator – the accelerator that propelled them into the startup stratosphere.

After an uninspired pitch to Graham, the founders were leaving the room when Gebbla pulled out a box of Obama O’s that he had snuck into his bag, despite protests from Chesky. The pair told Graham the story about how they had pulled themselves out of debt and kept their startup dream alive through selling cereal.

“Wow. You guys are like cockroaches,” Graham said. “You just won’t die.” Chesky realized  later that was a compliment. Graham explained, “If you can convince people to pay $40 for a box of cereal, you can probably convince them to pay to sleep on each other’s air mattresses. You guys are in.”

To watch the interview in its entirety, click here.