See.Me is the perfect example of an accidental startup. It's the kind of company that could only be built outside of Silicon Valley in a place New York, or LA, where tech isn't a top aspiration for the city's young, ambitious talent. See.Me, which changed its name from Artists Wanted in November, is rooted in parties.

Founder William Etundi Jr. gained notoriety in the New York nightlife scene for his massive Brooklyn warehouse parties called Danger. When the parties got so big they were unmanageable (we're talking 10,000 guests), he re-imagined the events as high-end art events. He noticed the incredible artists, musicians, and photographers that he worked with could benefit from a wider audience.

So he launched a website called Artists Wanted so they could build profiles to showcase their work, and used his party list to promote it. His friend Perry Chen from Kickstarter was impressed by the site's traction. "He told me, you should consider yourselves a real Internet company and get some funding," Etundi says. So he did. Artists Wanted changed its name to See.Me, raised $1.5 million from OATV, Founder Collective, SV Angel, NYC Seed, Joshua Stylman and began building the site into an international community of artists.

It hasn't taken long to build the social network to hit 600,000 users. Fresh off a redesign today, the site is propelled by unique promotion opportunities for its members, such as contests with Times Square ad space, features in magazines and cash grants as their prizes. The latest celebrity to join the site, following the footsteps of Questlove and Reggie Watts, is Q-Tip, who signed on judge a music contest awarding $30,000 in grants, a recording session and an exclusive listening party hosted by Downtown Records.

It helps that See.Me's terms are more user-friendly to artists than the last wave of Web 2.0 social networks. On YouTube, or Instagram, Pinterest Tumblr or Twitter, the unfortunate "free" adage rings true: "If you're not paying for it, you're the product." YouTube sells ads against your video content and you might get a tiny cut of that, but probably not. Instagram might or won't or maybe will eventually use your photos for promotions. Venues are already doing it. And Pinterest and Tumblr have apparently, in their terms of service, reserved the rights to anything you upload. Since it's meant for artists, See.Me's users retain all rights to what they upload. And they're not in danger of violating copyright laws, because they're only allowed to upload their own work.

See.Me's business model will be revealed in a few weeks, Etundi says. It'll be a hybrid between commerce and a tip jar, where artists can sell work if they want, or collect donations in the way that some blogs guilt trip you into that. Advertising won't be an option -- See.Me only wants to profit when members of its community profit. "We have built-in ways to partner with users so we're aligned," Etundi says. It's a philosophy I've seen more startups adopt as users increasingly feel exploited and helpless by the one-sided ways the first wave of Web 2.0 companies like Facebook and Twitter have chosen to monetize. Backspaces, a storytelling app that combines text and image, is one example of a social network with a user-first monetization plan. 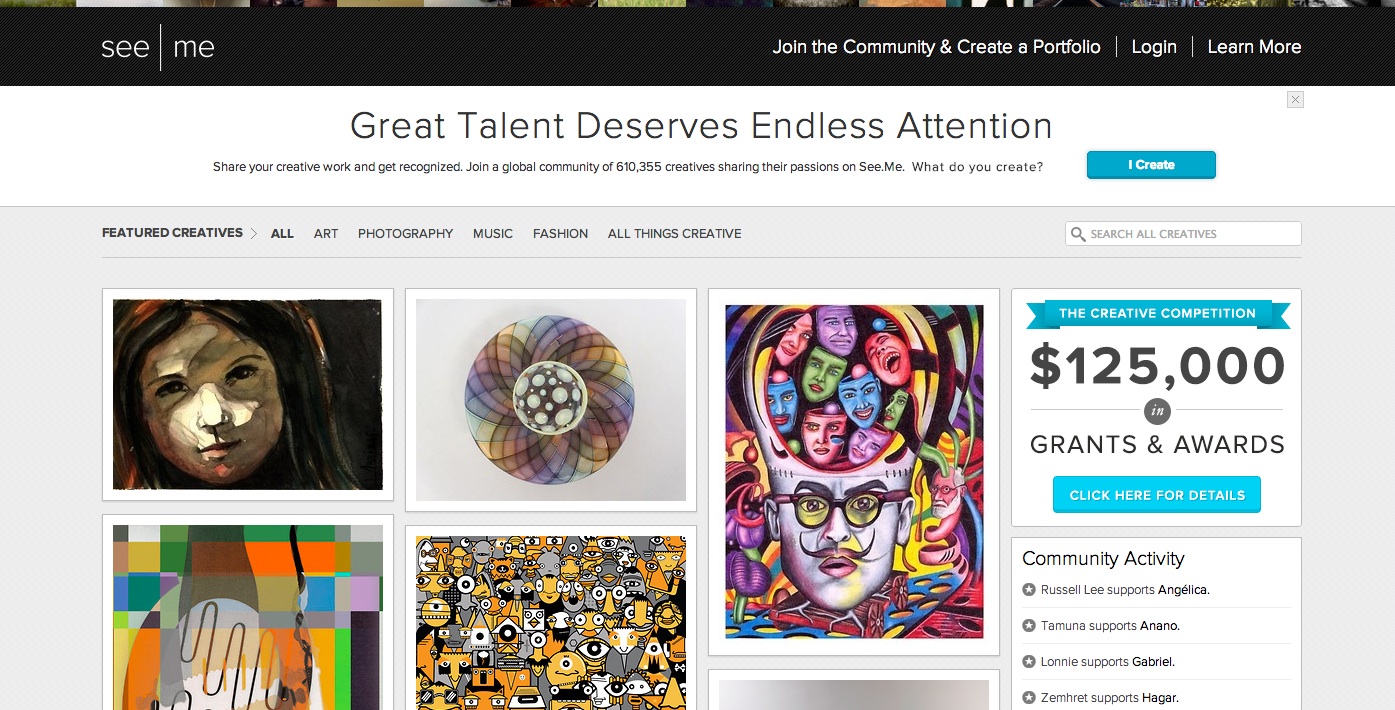