It has all the makings of a Jason Bourne spy thriller – or a really bad movie. Wealthy (or not), eccentric (definitely), software pioneer John McAfee, who fled his jungle home in a Central American republic after authorities tried to question him over the murder of a neighbor, has washed up in Portland, Oregon. What he'll do next is anyone's guess.

Mary O'Hara caught up with McAfee in a cafe and a titty bar, where he talked about the challenges of finding a six-bedroom house to lodge his harem of women, among other topics.

“Hello, this is John McAfee. I hear you’ve been looking for me.”

The voice on the phone was deep and calm. It could have been anyone, but as I would later verify, it was indeed John McAfee – anti-virus software pioneer cum murder suspect –  calling me on a Wednesday night in January. McAfee was right down the road in Portland, Oregon. He had come to town, quietly and unannounced, just a couple of days before. I discovered his arrival via the Facebook update of a strip club bartender, who posted “photo shoot with bad boy computer dude John McFee (sic) at Mary’s for the London Times” late that afternoon. Incredulous, I called the bar and was soon led on a multimedia wild goose chase before finally receiving a mysterious call from a Tennessee number around 10 pm.

The last anyone heard, McAfee had been arrested in Guatemala, where he suffered a heart attack in jail before being handed over to US Authorities in Miami. It was merely the latest epic oddity experienced by a man whose notoriety had begun back in 1992 when he used the alleged threat of the Michelangelo virus to blackmail the world into viewing anti-virus software as a necessity, then made millions with the launch of his company. For the past several years, McAfee was transformed from a business geek into a Colonel Kurz-like figure living in a virtual harem in Belize. It had the makings of an updated "Apocalypse Now," wealthy white inventor builds bizarre empire in a small Central American backwater, complete with secret laboratory, guns, assassination attempts, and routine meetings with Colombian drug lords. It was media candy, and it reached its height in December 2012 when McAfee fled Belize – two young girlfriwends in tow -- amidst murder allegations.

But there was one thing no one saw coming. McAfee had just driven 3,000 miles from Miami to Portland, Oregon. Why? 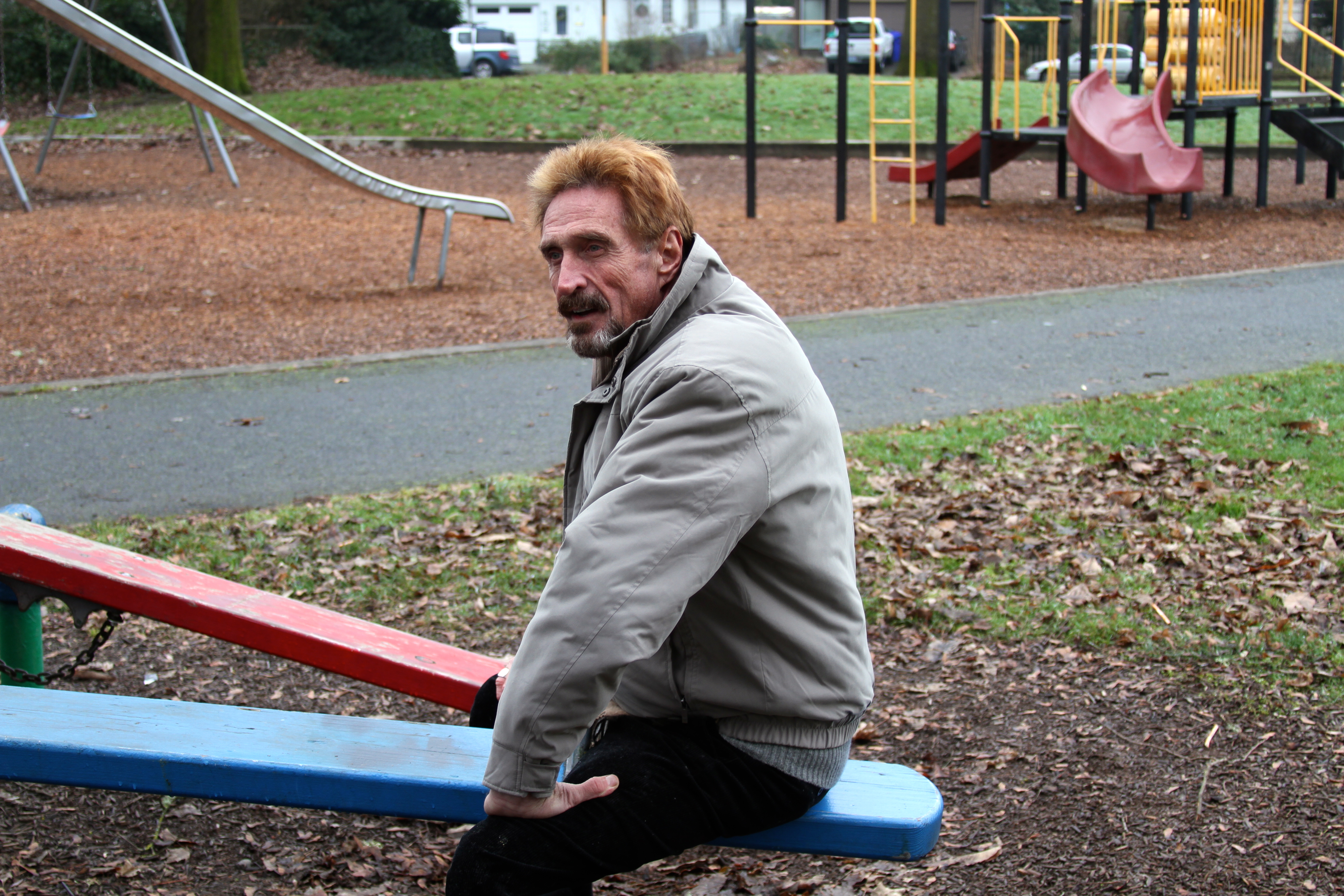 McAfee agreed to meet me the next day for an interview. A stringer for the local alt-newsweekly Willamette Week, I hadn’t completely convinced my editor that I was actually going to meet John McAfee, but he set me up with a photo and video team nonetheless. When he walked through the glass café door, McAfee was instantly recognizable, the same hollowed man with a broom of dark blonde hair I'd seen in photos. Perhaps his most prominent feature is his eyes, which stare fearlessly and hard, intimidating the hell out of young reporters who suddenly wonder what they’ve got themselves into.

McAfee had brought Chad Essley along – a cartoonist illustrating his autobiography in graphic novel form. Essley ordered a couple of lattes, and the three of us sat down to chat. After about 15 minutes of warming up, I let them know that I was going to turn on the recorder and call over the video guy to officially start the interview.

John McAfee sat back in his chair and began to talk.

“I’m here because Chad is here," he said. "I’m moving here for a year or so. There’s no such thing as permanency."

He stopped to admire the foamy top of his latte, swirled into the shape of a leaf. “This is too pretty to drink,” he said gently, followed by an admiring coo. Not a sound you expect to hear out of a man who Belize authorities chased after for questioning after the murder of his next-door neighbor. “I looked at condos yesterday downtown and they’re a little small,” he continued. “I’m looking at a house tomorrow... They’ll do a long term lease for 18 months. I need space to work. I need space for the girls.”

“You didn’t read my blog,” McAfee said, sounding a little offended. He explained that he was planning to bring Samantha, Amy, and his other young Belizean girlfriends to Portland to live with him. “The girls” are currently hiding in Guatemala, according to McAfee, awaiting legal clearance to come to the United States. McAfee has a team of lawyers working on it while he prepares the nest: “This is a six bedroom place, which will be a little cramped, but we can make it work.”

Later in the week, we meet at the topless bar that first ushered McAfee into local life and he tells me the house is a no-go. “I was denied for the house,” he says. “I think it’s the press. Maybe the notoriety is not working in my favor right now.”

Meanwhile, McAfee’s latest lady-friend sips a Coke, her arm draped over his shoulder. I ask how long they plan to be in town.

“Oh, we’re planning to stay for about a year and a half,” she says, tucked cozily into McAfee’s side and nodding with the authority of a woman who knows she has a good thing locked down.

With his penchant for harems, I imagine McAfee will need all the anti-virus protection he can get.

In the next installment of this ongoing series I take John McAfee to a Portland tattoo parlor, where he gets a certain woman's name inked on his shoulder, and shop for guns and gas masks at a local survivalist gear shop.