Call 2012 the year of cashing in. According to a SecondMarket's annual report, in 2012, 66 percent of sellers private company stock were current employees, and  26.3 percent were former employees. That's up from just 11 percent in 2011, when former employees made up the majority of sellers -- 79.3 percent. SecondMarket is no longer just for VC's to get out early and ex-employees to unload equity. It's for current employees.

It was a year of transition for SecondMarket. A privately held Facebook was once its cash cow. It's funny to think of now, but prior to May 2012, people were falling all over themselves to buy Facebook stock. Secondmarket even laid off ten percent of its staff due to Facebook's IPO.

Now, IPO, Secondmarket has positioned itself as more of a service provider for private companies, offering tailored liquidity programs. If an employee wants to buy a house or wants to do some angel investing, he or she can vest shares on SecondMarket according to the company's wishes. All sales require the company's approval, which judging by the increase in volume, SecondMarket has worked hard to win.

You already know the macro-trends driving this: It's difficult and undesirable to go public if your company is worth less than $1 billion. Blame Sarb-Ox, blame high frequency traders. Chi-Hua Chien of Kleiner Perkins tweeted the best example of this yesterday:

Companies simply stay private longer. The consumer-facing tech companies that have braved the public markets this cycle -- Facebook, Groupon, Zynga -- have come back battered and bruised. What options does that leave a company that needs to provide liquidity for investors and employees but doesn't want to sell or IPO?

Etsy seems to have it figured out, as Chad Dickerson explained to us at PandoMonthly last week. He hired Kristina Salen, head of Fidelity Investments’ media, Internet and telco group, to prepare the company for a possibly SurveyMonkey-style liquidity event. SurveyMonkey did an $800 million recapitalization with debt financing as a way to stay private and independent while returning money to its investors.

Regardless of how these large tech companies obtain liquidity for their investors, their employees have more options to cash in. Last year SecondMarket did $535 million worth of transactions, a 4 percent decrease over last year. 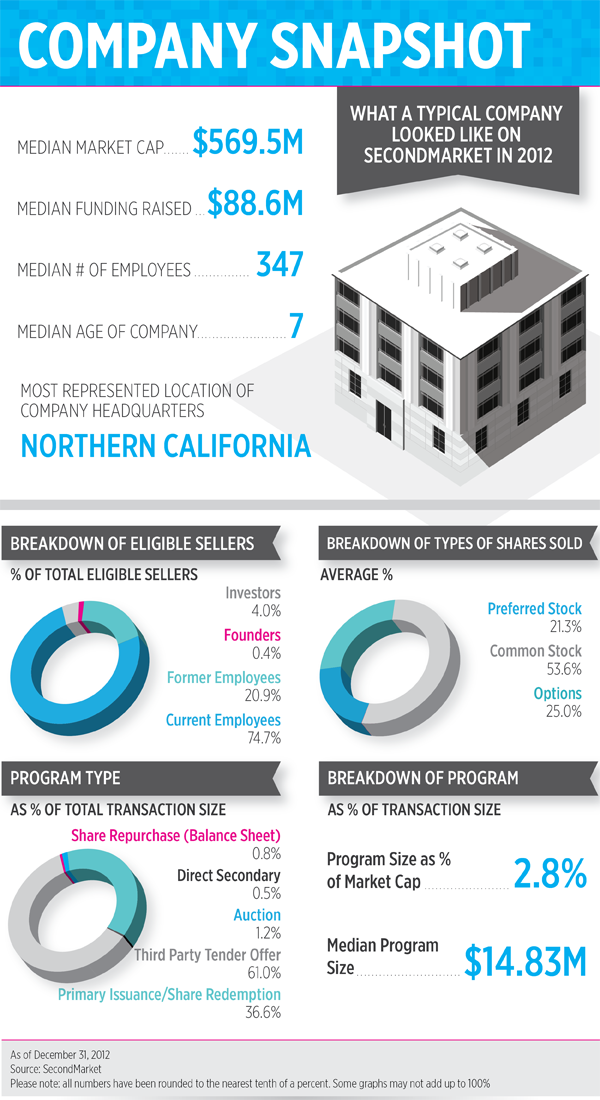