“Danger” Ehren McGehey is best known for being shot out of a cannon and having his front tooth yanked out by a car on the MTV series "Jackass." Around here, he’s all that plus a local boy who made good, a McMinnville native who parlayed his movie and TV moola into a thriving bar business. He’s a wild-eyed, hard partying Irish kid with a penchant for doing incredibly stupid things while cameras roll. Who better to introduce John McAfee to the more colorful aspects of Portland?

After all, McAfee is anything but predictable. He showed up suddenly and could zip away at any time. Just in case he decides to hop the next plane to Easter Island, we set him up with McGehey and a crew assembled from local documentary producers and reality show vets, who decide on a last-minute itinerary of scenes designed to produce edgy ad-libbed dialogue between McAfee and the "Jackass" actor. It’s like mixing two volatile compounds to see what will happen.

On a chilly Tuesday morning, we meet at the Stumptown café on 3rd Avenue downtown. McAfee is first to arrive. He turns down coffee and starts a seemingly endless series of phone calls to his lady friends. Into the phone, McAfee asks, “They want me to get a tattoo, what should I get?” He laughs at the response, then replies, “I don’t think it will be easy to fit your ass on my face but I will try.” McAfee allows me to listen in on conversations that I think he hopes will shock me -- when he isn’t directly preaching the gospel of anal sex and multiple partners, that is.

When the crew is ready, we head down the street toward the first stop on the tour: Iconic 24-hour sweet shop Voodoo Donuts. The crew takes McGehey around the corner to shoot an introductory monologue, in which he pretends to be “old friends” with McAfee and jokes that they “met at a philanthropist’s party.” McGehey’s task for the day is to improvise material–but the truth is, the weirdness of the tour shines through effortlessly. You plunk down a darkly notorious businessman like McAfee in a happy-go-lucky granola town like Portland and add a comedian to the mix, and it’s just plain bizarre. 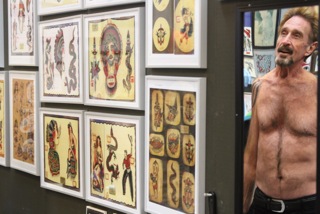 I stand with McAfee in the brisk winter morning. He’s chain smoking, with a far away stare and few words. This mercurial shift between extrovert entertainer and quiet intensity happens fast and often. When the crew returns they shoot a skit where McGehey and McAfee have a donut-eating contest. The sight of the weather-worn John McAfee frantically shoving a huge chocolate-iced donut into his mouth is as surreal as anything I’ve experienced with him so far. The skit is a set-up: McAfee loses on purpose.

The contest loser has to get a tattoo, according to the itinerary. We all pile into several cars and head across the Burnside bridge to Sea Tramp, Portland’s oldest tattoo shop, where the walls are lined with vintage sailor flash: growling panthers, hearts struck through with daggers, naked ladies giving the military salute.

McAfee sheds his shirt, though the artist still needs a half hour to design the tattoo he’s requested, and begins pacing outside in the cold while making phone calls and smoking. McGehey, bundled in a warm jacket and knitted beanie, asks, “Do you know that it’s about 38 degrees outside right now?” McAfee stares back at him blankly and says nothing. For a really long time. McGehey turns to the crew with a wide-eyed grin. Throughout the shoot, he laughs and shakes his head at nearly everything McAfee says and does.

McGehey had been contacted just two days before and immediately said yes. He seems to find the whole thing hilarious -- just another adrenaline seeking stunt in the day of an itinerant Jackass. For McGehey this was right up there with convincing Britney Spears to take a bungee ride in a urine-logged Port-a-Potty.

The crew decides to kill time across the street at Andy & Bax, a local military surplus store. It’s McAfee’s first time “acting” this way, playing himself but placed in constructed scenarios. This more meta-McAfee tries gamely to rise to the occasion. He is performative, willing to do anything, including wear a ridiculous reindeer hat and try out a gun from behind the counter, which he handles expertly, driving the magazine back and forth until McGehey says soberly, “This is scary right now.”

The fact that he’s scared says it all. McGehey once allowed a deranged donkey to kick him in the nuts 17 times and tied one end of a fishing line around a tooth and the other to a Lamborghini. The car stunt left a hole that’s now filled with gold and diamonds, and makes McGehey look like gansta rap’s newest white and bearded star. It takes the sight of McAfee with a pistol in his hand to make him feel a sense of unease?

After buying a gas mask, McAfee returns to Sea Tramp and goes shirtless again. As the needle gun whirs, the cameras surround him and he talks about his ladies. One, he says, wants him to get a tattoo of a black pearl -- but he had already decided on the name of another. McAfee’s existing tattoo covers a large section of his chest, back, and shoulders: a tribal design of blue lines falling somewhere between Maori art and tiger stripes. 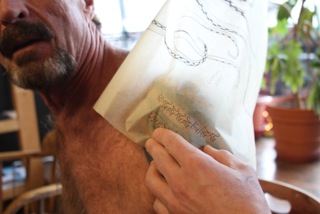 He’s sitting back in the heavy rotating barber’s chair, smiling without a flinch as the tattooist wipes way the blood between attacks with the needle. McGehey asks McAfee about his life and three cameras battle to gain the closest vantage. McAfee seems to appreciate the scramble. Twenty minutes later, his “Samantha” tattoo along with the subtle black pearl is greased and wrapped in plastic, and we’re on our way to the next location.

Devil’s Point is one of Portland’s many punk rock strip clubs. It’s tiny and dark, a dive bar serving up cheap beer and tater tots to the hip, young mixed-gender crowd that flocks here to watch strippers with Mohawks and full body tats do karaoke while hanging from a brass pole. As the crew sets up lights and camera rigs, McAfee wags me over. “I need to talk to you,” he says in a low demure voice. We go outside into the daylight and sit on a smoking bench.

“I’m not comfortable with the scene,” he says, “and I’m not going to shoot it.” He is concerned about his image. “I’m not a strip club guy. I’ve been to maybe two strip clubs in 30 years -- one to shoot photos and the other because you asked me to meet you there,” he explains. “And now suddenly I’m this strip club guy in the press.”

I find this puzzling. Here’s a guy who boasts of living with a harem of seven young women, some of whom had backgrounds in the sex trade, and he doesn’t want people thinking he goes to strip clubs? But he has a point. I found out he was in Portland through a Facebook post by a strip club bartender (see the first installment of this series.) But he was only there because reporters from The Sunday Times of London asked to shoot his portrait. I also mentioned McAfee’s presence at the titty bar in an article for a local Portland news weekly. McAfee is nothing if not an image svengali: he prides himself on manipulating the stupidity and sensationalism of the press. “I never sign waivers,” he tells me in regards to shooting video interviews. “That way I always control whether or not they can show it.”

McAfee is also sensitive because he claims to be a teetotaler, alcohol- and drug-free for many years despite insinuations that he mixed and partook of “Bath Salts,” a drug known for skyrocketing the sex drive, causing erratic behavior, and generally making someone look cracked-out as all hell. It’s hard to reconcile his oddities with sobriety, but it’s possible that his previous drug use altered him.

On top of that, he claims several times during our talks: “I’ve always been this way. I’ve never lived anything but what you call an alternative lifestyle.” It’s not as if he’s the first math geek to seem a little wacky, but it’s also hard not to question whether he may have slipped back into old habits when others have accused him of paranoia and disturbing behavior -- including his former QuorumEx lab partner in Belize, Allison Adonizio, who told Gizmodo McAfee was “controlling, manipulative, and dangerous,” and “I’m thankful that I got out with my life.”

In the end, the strip club scene was scrapped and replaced with a less incendiary visit to a playground. Witnessing John McAfee fist-pumping on a seesaw was the second most surreal moment I’ve spent near him. I doubt “Danger” Ehren McGehey and McAfee will cross paths again, and it’s highly unlikely that McAfee will pursue a career as a comedian -- but for a moment, he was a square peg placed into a circle unknown to him, in the most entertaining and unnerving way.

A week after the shoot wrapped, I got a text from McAfee: Do you have a passport? I have a proposition for you. Could be the opportunity of a lifetime. We met that afternoon in the library of downtown Portland’s Heathman Hotel (made famous as a setting for the "Fifty Shades of Gray" novels.) McAfee insisted that I swear to secrecy as he told me the details of his upcoming trip, and asked if I could come along with a camera crew. “You’ll need to leave Wednesday,” he said, “To be at the airport when Sam arrives. You can’t tell anyone where you’re going. Not your editor, not your mom.”

“But that’s in two days,” I replied. Yet slowly I realized that this could be McAfee’s last moment in Portland. I didn’t know exactly where I was going, only that it was out of the country. Unsure of whether I should be concerned for my personal safety, I knew that I had to go.

Next installment: I join the McAfee mystery tour, see him off to his new home, and meet his 19-year-old fiancée Samantha.