When the elevator doors open into the lobby of the Heathman Hotel, I feel the bulge in my pocket: $2,900, in one-hundred-dollar bills. Carrying this much cash makes me nervous and adds to my sense of inferiority, since I’m wandering around Portland’s most upscale hotel in jeans, a grubby sweatshirt, and mud-covered boots.

Everyone must think I’m a prostitute, and, well, maybe in a way I am.

I’ve just accepted a wad of cash from a wealthy gentleman to buy tickets to a tropical island paradise. But there will be no sexual favors. The money is for two last-minute flights and accommodations for a videographer and me. In two days we’re meeting John McAfee overseas. There, we’ll wait for Samantha Vanegas -- McAfee’s young fiancée who has been in hiding in Central America since December. McAfee says Sam had never left Belize before they escaped to Guatemala together, and this flight from Panama City will be her first time on an airplane.

I bring along my partner, Susan Martin, a camera operator and editor for documentary films like "How To Die In Oregon." It’s not easy to convince someone to suddenly leave the country with a potential murderer, especially under such vague conditions. All McAfee told me was that we could shoot Sam’s arrival. Then “leave us alone for about 24 hours,” he said. “We haven’t seen each other in two months.” McAfee had been stringing me along with promises of a big story, and, although I realize it violates all kinds of journalism ethics for us to allow a source to pay our way, we’re struggling freelancers. If he didn’t pay our way, we couldn’t do the story. (Consider this disclosure; I’m sure you’ll let me know in the comments whether you think I did the right thing or not.)

Susan and I fly to Seattle and run into McAfee. It turns out there’s only one red-eye to Miami, the doorway to Latin America. McAfee is recognized with alarming frequency -- in airports, on the street. He’s pointed at, whispered about, and approached by people who say things like, “Hey man! Good luck to you!” We do a quick on-camera interview then board separate parts of the plane. McAfee flies coach, which comes as a surprise to the guy sitting next to him – along with his rattling cough, a gift from the wet Oregon winter.

In Miami we part ways again, and take separate flights to our final destination. Hours upon hours of travel later, we convene and begin the long sleepless wait for Samantha in a Caribbean airport. 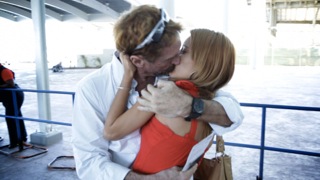 An hour into our wait, which McAfee spent pacing nervously, the board shows that Samantha’s plane has arrived from Panama City. Tourists wearing Hawaiian shirts and wraparound sunglasses stream out of the doors. An hour passes, then two. McAfee leans on a rail, peering through the doors to try and see past the crowds inside. Finally, McAfee does what only the wealthy can. He bribes an airport worker with a $100 to go find Samantha. Ten minutes later, she emerges.

She is tiny, and jumps into McAfee’s arms and wraps her arms and legs around him. She’s crying. “I missed you,” she says in heavily accented English. They took her passport and brought her back for questioning, the immigration officers asking about her plans and McAfee. Finally they stamped her passport for a 10-day visit.

“I’m tired,” Sam says. She smiles as Susan, and I shove cameras in her face. “Are you filming this?” she asks.

As we agreed, McAfee parts ways with us, and we reassemble two days later. McAfee’s set up some kind of itinerary for us all. It’s nearly impossible to get details from him in advance, perhaps to add an air of mystery. Susan and I meet them at their impossibly opulent hotel, some kind of former mansion, and we all pile into a taxi. The driver has become a tour guide of sorts for McAfee – and more.

At one point McAfee leans forward and asks, “Sir, will you be able to acquire that thing we discussed?”

“Yes,” the driver replies. “I don’t see a problem. I can get it to you tomorrow.”

I ask what “thing?” but get the brush off.

We’re going apartment hunting. McAfee wants a place here for Sam and himself until he can bring her to the States. One wild theory I’d had was he would attempt to smuggle her into the US. Clearly he’s not. But this apartment hunt also feels off—we’re literally driving around in circles, looking at buildings at random, although it gives me time to talk to Sam in Spanish and English. She also speaks Creole, which she uses to share private jokes with McAfee. 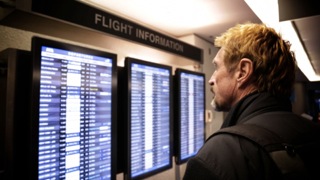 I get the same feeling from Sam as I get from McAfee. She’s guarded, adept at carefully choosing what not to say. While McAfee inspects a nearby house, she sits on a slab of broken concrete in an abandoned lot and puts up with my questions. I ask about the dramatic age difference (she is 19; McAfee, 67.) “Most people judge, but that is up to them,” she says. “What John and I have is between us. I love him, and he loves me.”

Isn’t she with him just for the money? After all, here’s a man who sold his anti-virus company for $100 million – and it can’t hurt that he’s getting on in years.

“You know, I’m always asking John -- do you really need all this?” she says, referring to the fancy hotels and expensive gifts. “I grew up in a one-room house with 10 people. I don’t need nothing. I would be with John with or without his money. But you know, for now he maintains me, and when he gets older I will work and maintain him.”

McAfee claims this kind of age gap is normal in Central America. One of his most commonly applied defenses is that life is different for people outside the US: “Americans don’t believe my story about Belize, because they don’t understand how violent these places really are,” he says. “They don’t know anything outside of their comfortable lives.”

He calls off the apartment hunt as abruptly as it began, deciding to move to an entirely different city within the same country. It’s hard to know what spurs these rapid-fire changes. We agree to meet later for a formal interview at their hotel, and after dropping them off, Susan and I head back to our own.

Getting out of the car, the driver helps scoop up our bags and equipment. I ask: “So what’s the secret thing you too were talking about?” The driver shakes his head, smiling: “Some things were meant to be secret.”

As we gather everything and head up to the room, I notice a small silvery shopping bag among our things. “Hey, this isn’t ours,” I say to Susan, and peer inside. The only contents: a receipt from a  local jewelry store. A receipt for a ring. A balance with many zeros.

That’s when it hits me. McAfee has been teasing us, leaving little clues here and there. It can’t be a coincidence that he “forgot” his bag in the taxi. He doesn’t need to smuggle Samantha Vanegas into the United States. He’s going to bring her in the old-fashioned way. And we’ve been hired to be his wedding photographers.

John McAfee is about to make his teenage Belizean lover his bride.