Commerce technology is a massive opportunity (and retail is not dead)

There has been recent discussion about whether retail is dead. We couldn’t disagree more. We predict that over the next five years consumers will experience completely new retail models that effectively use physical locations combined with world class Internet and mobile sites to offer truly unique and delightful shopping experiences for their guests.  These retailers will thrive.

These companies will transition to “lower-cost” and smaller retail footprints. They will utilize these spaces as a major asset to improve the costs and friction associated with shipping and returns; to offer new and innovative ways to promote product discovery; and to offer levels of service and entertainment that will be difficult to match by algorithms and machines on the Web.

But at some level, from the standpoint of technology entrepreneurs, this debate is irrelevant. What is clear and irrefutable is that ecommerce overall is an enormous and growing industry. And whether the composition of the industry is dominated by pure-play or multichannel, we know that all the players will need massive amounts of technology in order to be successful. This is why we believe that commerce technology is the single most attractive technology space for B2B entrepreneurs in 2013.

So how large is the opportunity? Global ecommerce is the only trillion-dollar industry growing in double digits.

According to a recent eMarketer report, global ecommerce sales in 2012 topped a trillion dollars in annual sales ($1.2 trillion). In 2013, global sales are estimated to grow by 18 percent, and by 2016, 15 percent. If these estimates are accurate, in the next five years, ecommerce is estimated to grow by another $1.2 trillion, doubling in overall market size. And today, global ecommerce represents only 6.5 percent of the overall retail vertical. 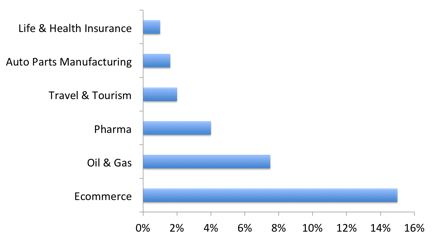 Amazon accounts for roughly 25-35 percent of all online commerce. Their success over the past decade is directly attributed to their technology advantage. As a result of their technology and infrastructure investments, Amazon has the most advanced capabilities of any player in the areas of website personalization, customer targeting, price optimization, frictionless checkout, low-cost and fast shipping, and product selection. 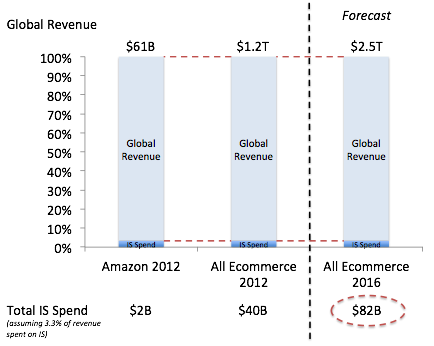 We’re only in the first wave.

In the last three years, we have seen the first wave of commerce technologies reach maturity.

Pioneering entrepreneurs over the last decade have started technology companies to help both pure-play ecommerce companies and multi-channel retailers effectively compete in the ecommerce world. Many of these companies started at a time when it was not necessarily obvious that ecommerce technology would be a big enough space for large venture-backed exits. However, these companies have enjoyed strong growth rates due to the market tailwind of ecommerce growth, and many have resulted in exciting exits: GSI Commerce,Demandware, Endeca, Kiva Systems, BazaarVoice, Omniture. Congrats to Michael, Stephan, Steve, Mick, Brett, and Josh – these guys were pioneers and have paved the way for a wave of new startups and entrepreneurs.

We are only scratching the surface.

If you look at the entire value chain of ecommerce, the companies listed above have solved only some of the core aspects. In addition, many private companies have launched in the last five years to tackle additional areas. However, there are three things worth noting that lead us to the conclusion that we are still in the early days of innovation in this space:

1.  There are significant portions of the ecommerce technology value chain that are still unsolved by startups or legacy vendors.

We talk to hundreds of CMOs a year and they outline for us the set of challenges and opportunities for which they would love to find an innovative technology vendor. The list is long, but some of the examples they have shared with us include:

In many of these areas, Amazon is investing heavily and has consistently been the market leader. Everyone else needs to catch up.

2. The space is still extremely dynamic and is growing at extraordinary rates.

As mentioned before, the space is growing at 15 percent a year. But the market is also experiencing tremendous shifts in consumer behavior leading to exciting new opportunities:

There has never been a more dynamic time in this space.

3. Over time, the definition of “ecommerce” is getting broader. Every business is an ecommerce business.

When many people hear the word, “ecommerce” they naturally think retail.  However, every business leverages ecommerce/Internet technologies for at least a portion of their value chain. Whether it’s a bank offering credit cards, or an auto dealership booking service appointments, or a software company soliciting leads and prospects, or a restaurant displaying its menu, or a hair salon selling beauty products, or dentist booking appointments – they all need to leverage the web and mobile to attract, find, communicate, and service their customers. Whether the actual “commerce” transaction occurs on a digital device or with a sales rep or in a physical location is secondary and immaterial. What is material is that every business on the planet will need to invest in commerce-enablement technology to stay competitive.

This is why we love this space; why we think the CMO will spend more than the CIO on technology five years from now; why we believe someone will build a $10 billion marketing technology company; why we don’t think retail will die; and why we think this is the single most exciting opportunity for technology entrepreneurs in 2013.