Data, at last: Native ads are killing it, say the sellers of native ads

Amid all the hype about native advertising and its potential to save the world (or at least, the media world), we've been missing one thing: proof.

Part of the issue is related to the IAB. The Interactive Advertising Board validates various digital ad units and like any big governing body. It's exciting stuff -- there's the classic 300x250 "Medium Rectangle." The 160x600 "Wide Skyscraper." The 300x600 "Filmstrip." (This is classified as a "Display Rising Star" thanks to its newness.)

The point is, when ads conform to IAB's standard formats, its far easier sell to them at high volume. And that's what native advertising is struggling to achieve -- scale. But it takes a long time for the IAB, which represents many competing stakeholders in the digital ad world, to come to any sort of consensus. At the Native Ad Summit last month, IAB Head of Brand Initiatives Peter Minnium told his fellow panelists to be patient. Any sort of IAB approval on a native ad unit would be years, not months. Native ads are practically impossible to standardize because they are by definition unique to the platform that's hosting them. By the time the IAB recognizes native ads, they'll probably be out of vogue and we'll have moved onto something entirely different.

So, in the interim, native ad companies are taking things into their own hands. No company has been more fiercely aggressive about attaching itself to this native ad wave as Sharethrough. If representatives for the company aren't prolifically penning op-eds on native ads, or featured in stories about native ads, they're weighing in in the comments section. Sharethrough hosted the aforementioned Native Ads Summit.

Today the company unveiled what I'm fairly certain is the first third-party study of native ad effectiveness. Considering the study was funded by Sharethrough, the results -- NATIVE RULES! -- are not surprising. But since native ads are so young and in need of some early metrics, the study is worth digging into. 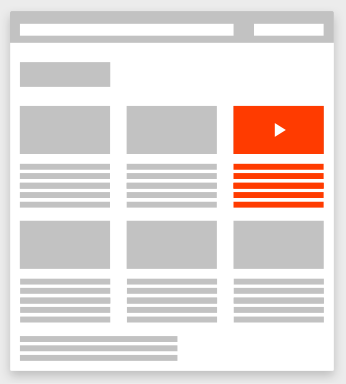 One important note, though, is that Sharethrough focuses on native video ads, which are (in my opinion) not so much "native" as they are paid video placement (see the image to the right for an example). But let's not quibble about the definition of native -- we've already dedicated a whole conference to that. If native means anything that looks, acts and feels like content, then Sharethrough's video ads are native.

The company teamed up with Nielsen to dig into five case studies on its native video ads. In all five cases, Neilsen reported "higher brand lift" than pre-roll. Native ads generated 82 percent "brand lift," meaning people who watched the ad saw the brand more favorably than they did before. In contrast, pre-roll ads generated just 2.1 percent brand lift, while 29.3 percent more of the pre-roll viewers saw the brand unfavorably after watching the pre-roll.

The difference is that Sharethrough's native video ads are voluntary -- they live amid the content and are only viewed if a user clicks on them, rather than being forced to sit through the ad while waiting for the content you really want to watch. What Sharethrough didn't disclose was how many fewer people voluntarily clicked on the ad. Presumably the company doesn't get paid if an ad isn't viewed, so it's in Sharethrough's best interest to get its native ads well-placed.

These are encouraging early results for native advertising, but unfortunately doesn't help an overall category diverse enough to include Sponsored Stories on Facebook, Promoted Tweets on Twitter, Sponsored Stumbles on StumbleUpon, Sponsored content on Buzzfeed, or "Radar" placement on Tumblr. If native needs standardization and universal performance metrics in order to truly going to save us all, we're going to be waiting awhile.