The New York Times should be ashamed, but only for pandering to idiotic Twitter outrage

Another victory for the (fictional) Internet Community! Today the New York Times was forced to edit Douglas Martin's obituary of rocket scientist Yvonne Brill (pictured left, played by Alastair Sim) after twitterers and bloggers took offense at the lede:

"She made a mean beef stroganoff, followed her husband from job to job and took eight years off from work to raise three children. “The world’s best mom,” her son Matthew said."

The outrage was pretty well summed up in a post on i09, titled "The New York Times fails miserably in its obituary for rocket scientist Yvonne Brill"...

"The blowback has been considerable. Since its publication yesterday, the obituary has attracted a firestorm of remonstration on Twitter. A small sampling of tweets captures the air of incredulity:"

Blowback! A firestorm of remonstration! The air of incredulity! It sure was a dark and stormy night for the New York Times. And how about those Tweets? 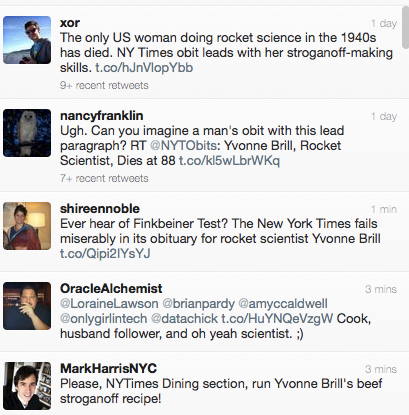 And on and on and on. So thick, in fact, was the "air of incredulity" around the obit -- leading with Brill's role as the "world's best mother!" how very DARE they! -- that Times Public Editor, Margaret Sullivan felt obliged to step in...

To the many who've tweeted at me about the Yvonne Brill obituary, I sure agree. And here's some more perspective: cjr.org/the_observator…

Not long after Sullivan's tweet, the online version of the obituary was updated, changing the lede to open with Brill's work accomplishments rather than her personal ones. And with that readers of the Daily Internet Outrage Memo went back to amber alert, awaiting tomorrow's instruction for what every single one of them in unison is supposed to be outraged about tomorrow (spoiler: Urban Outfitters' Aaron Swartz keychain).

Just a couple of points, here. One minor, one pretty major.

Minor: the lede wasn't outrageous. It wasn't anything, actually, except possibly "fine". Yvonne Brill was an incredible woman for two reasons: her strides in the field of propulsion (she kept communications satellites in orbit) and the fact that she made them in the early 1970s, when women were expected to conform to strict gender roles as wives and mothers. It is remarkable -- obit-level remarkable -- that Brill didn't feel the need to choose between two worlds -- success as a scientist, or success as a mother (and, by the way, being a great mother is a hell of a fucking success at the best of times). Instead she chose to do both, and excel at both, on her own terms.

Today we might take that option for granted. We might even resent Brill slightly for playing into the woman-in-the-home stereotype at all (and there's definitely a sniff of that resentment amongst some of those who wish Brill's status as a mother had gone entirely unmentioned). But for a female scientist who came to prominence in the early 70s, her dual role is absolutely relevant, and worthy of celebration as a counter to the notion that feminism requires the rejection of all traditionally female roles like giving birth and making a mean beef stroganoff.

Really, the only debate is whether that dichotomy should be celebrated in the first paragraph of Brill's obituary. And here again, the answer is yes. It's yes because, contrary to i09's claim that "[Brill's career] is mentioned only after this spectacularly awful lede," the original headline of the obit reads, and has always read: "Yvonne Brill, a Pioneering Rocket Scientist, Dies at 88". 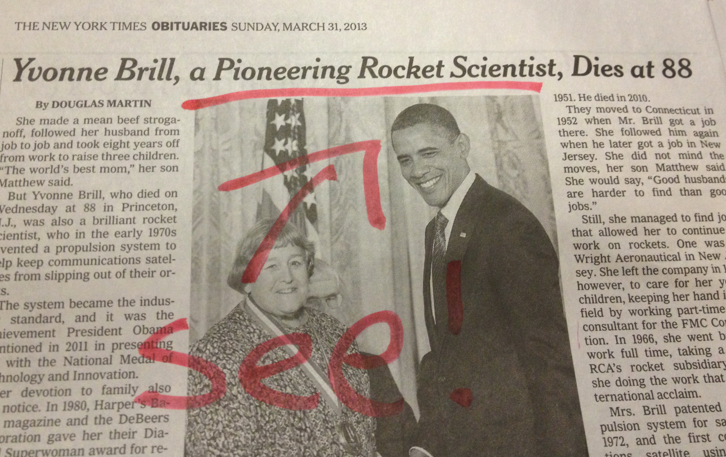 ...and because that's how writing works. For a bait and switch device to be successful, it has to be set up in the lede, opening with the unremarkable before jumping to the remarkable. Meet Thomas Crown. Business man, bon viveur, collector of antique fountain pens. Oh, and there's one other thing you need to know about Thomas Crown: he happens to be the most daring, most ingenious art thief ever to have lived.

Douglas Martin should no more have lead with Brill's job as a rocket scientist than (the remake of) The Thomas Crown Affair should have opened with Pierce Brosnan blowing open a safe. I mean, just read the revised lede: an opening paragraph that's as inoffensive as it is incomprehensible as it is dull as dishwater:

She was a brilliant rocket scientist who followed her husband from job to job and took eight years off from work to raise three children. “The world’s best mom,” her son Matthew said.

The New York Times was today pressured into changing the tone and content of an obituary, by a relatively small blip of Twitter outrage. There was no factual inaccuracy in the original piece, no libel, not even an offensive opinion. People on Twitter were just mad that the writer didn't present a successful women's achievement in the precise order the crowd felt was most respectful.

And so we see another example of the corrosive effects of social media on journalism. Last month, a study published in the Journal of Computer Mediated Communication, confirmed what most of us already knew: that negative comments (the "majesty of your uninformed ad-hoc reckon", as Mitchell and Webb put it) are capable of making otherwise intelligent readers doubt proven facts. Now we see America's newspaper of record handing over its editorial reins to the mob. "You don't like the way we phrased that opening paragraph? How about now? Now? Now? What about if we put an Instagram on the front page? OH GOD, PLEASE TELL US WHAT WE NEED TO DO TO MAKE YOU LOVE US."

It's a situation pretty much summed up by former NY Press founder-columnist Russ Smith, on Twitter, fittingly enough...

@paulcarr As NYT readership narrows into niche, it reacts quickly to criticism. Inconceivable in '95.

Inconceivable a few decades ago, par for the course today. How far we've come!