A lot of companies claim to change the world. Homeboy Industries actually does

In 1988, father Gregory Boyle presided over the first funeral of a member of his congregation stricken down by the violence in the streets of South-Central Los Angeles. Sadly, two days ago, he buried his 186th. As a Jesuit minister in the Dolores Mission, a predominantly Latino neighborhood that the LAPD called the most gang-ridden in the world, Boyle has sewn himself into the fabric of this marginalized community. But despite all the loss of life and sadness endured along the way, Boyle has dramatically changed the lives of thousands upon thousands of former gang bangers and felons over the last quarter century.

“The greatest measure of our ability to lead, is our ability to dismantle the messages of shame and disgrace that get in the way of creating kinship with those around us,” Boyle said last night, while addressing a roomful of middle school students and their parents at the Round Square Conference in Palos Verdes.

In addition to being a community leader, and now a highly sought after author and public speaker, Father Boyle is best known as the founder of Homeboy Industries. This non-profit organization rehabilitates former gang members by putting them to work, often side by side with their arch enemies. While too many people work on the latest photo-sharing app or stuff in a box company, Boyle – who the “homies” and “homegirls” refer to as “Father G” – is literally changing the world, one life at a time. His organization's guiding mantra is “Jobs not Jails."

Since its inception in 1992, Homeboy has grown from its humble beginnings as Homeboy Bakery to include Homeboy Silkscreen & Embroidery (now its largest business), Homegirl Cafe & Catering, Homeboy Diner, Homeboy Farmers Markets, Homeboy Grocery, and Homeboy and Homegirl Merchandise. Collectively, some 400 plus employees work at Homeboy each year.

There’s been a lot of talk recently about “frighteningly ambitious startup ideas.” Another common measuring stick for business concepts is whether they’ll “change the world.” But many of the headline-grabbing companies do neither, when it really comes down to it, no matter how many users they touch, or billions of dollars worth of value they create. Nothing could be further from the truth, however, for Homeboy Industries.

Father Boyle’s growing enterprise serves as an example of what can be created with a focus on impact rather than ROI. When he first launched Homeboy Bakery, it was a solution of last resort after failing to find “felon friendly” employers willing to help rehabilitate members of his community. It was the same roadblock that led him to open a High School on the third floor of his Church years prior.

Failing to find enough jobs for his most at-risk parishioners, Boyle secured a large donation from a movie producer and reopened a small, shuttered bakery in his neighborhood. The initial vision was small, but the impact created by Homeboy Industries has been enormous. Today, it’s the country's largest gang-intervention program, employing hundreds of felons concurrently.

In addition to its multiple small businesses, Homeboy Industries provides a number of vital community services. Homeboy’s tattoo removal service is free of charge, and the removes more tattoos than any clinic in the world, according to Boyle. Its counseling service provides access to six paid counselors and more than 40 volunteers, and its free GED classes have opened the doors to truly gainful employment to thousands. 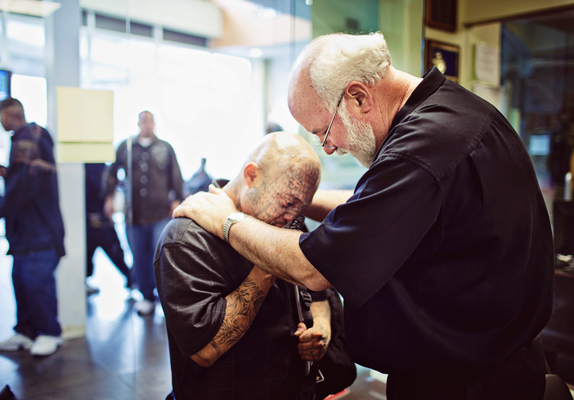 Boyle is an unassuming figure. A 58-year-old, balding white man with a white beard, he’s more apt to be mistaken for Santa Claus than for the closest confidant of hundreds of heavily tattooed homies and homegirls with rap sheets as long as the nearby 110 Freeway. But Boyle made his community’s culture and language his own. He is happier “kicking it” in his office with a few of his “eses,” “dawgs,” and young “chaparritos,” than anywhere else, he says as naturally as if he was telling you his name.

As Homeboy Industries has grown over its 20 years, the organization has made several key friends in high places. The first unlikely face was that of former KB Homes CEO Bruce Karatz, who in 2010 helped Boyle move Homeboy’s catering operation into a 35,000 square foot commercial kitchen, several times larger than the small storefront it inhabited at the time.

Karatz stuck around and helped Homeboy shore up its finances, sometimes pitching in on the foundation fundraising team and other times playing makeshift COO. Eventually, he played an instrumental role in getting Homeboy salsas and tortilla chips onto the deli shelves of more than 250 California Ralph’s grocery stores, where the products are a top-seller.

Most recently, Karatz helped Boyle move Homeboy Cafe into a recently vacated location within City Hall, where it’s now the only place to eat in the building. The new location, which was designed by a local architect, Mark Rios, features bright green walls with a mosaic of the Homeboy logo and framed black and white photos of homeboys and homegirls. The project was funded by a $400,000 donation from Karatz secured from Jesse Bonderman, the son of TPG founding partner David Bonderman.

Homeboy’s 2012 budget was $14 million, including $4 million in business revenues, in addition to $8 million of donations and $2 million in government contracts. Those figures are a far cry from 2009, before Karatz showed up, when the organization was operating at a $2 million deficit on just $2 million in revenue, and had to institute a moratorium on hiring and expansion.

In Homeboy Industries, Boyle has created a shining example of the power of social enterprise. While the group may be financed by donations and grants, rather than venture capital, it’s creating jobs and changing lives.

“As you watch folks, especially those at the margins, as they discover their truth, as they inhabit that truth – no bullet can pierce it. No four prison walls can’t keep it out, and death can’t touch it,” Boyle said in his closing remarks last evening.

“The measure of the health of the communities in which you will be leaders is measured in our ability to stand in awe at the burdens the poor have to carry, rather than stand in judgement at how they carry it. The measure of your compassion lies not in your service of those on the margins but in your willingness to see yourself in kinship with them.”