The truth about email: What's a normal inbox?

Email is like sex: everybody does it, but few talk about what we actually do or how we do it. And those that do tend to do so with missionary zeal, with lots of suggestions about what you should do.

We all spend way too much time on email, and have our own strategies and techniques for dealing with the deluge. Usually those techniques are a melding of Web, desktop, and mobile tools that we find least objectionable. But the tools, tips and tricks that work for one person tend to work poorly for another. Products designed to "help" often are more of a hindrance and force the adoption of new workflows that run counter to years of training.

Email behavior is like a Rorschach. Some like to maintain "Inbox Zero" while others just let email stream by them, pulling out only items of immediate importance. Then there are the compulsive filers: sorting and labeling things for later retrieval or to keep projects separate. Some react to emails immediately, while others allocate a fixed period of time each day.

Curious about this, we gathered data across 38,000 inboxes and dozens of mail providers. Our data is both limited and biased (especially towards Gmail), but it's at least a healthy-sized sample, and any significant sampling of the email market will result in a wide range of inbox and folder sizes. The specific numbers we arrived at should be taken as representative of a fairly random sample of user data collected in late 2012 and early 2013. Read on to learn more about email then you probably ever wanted to know. 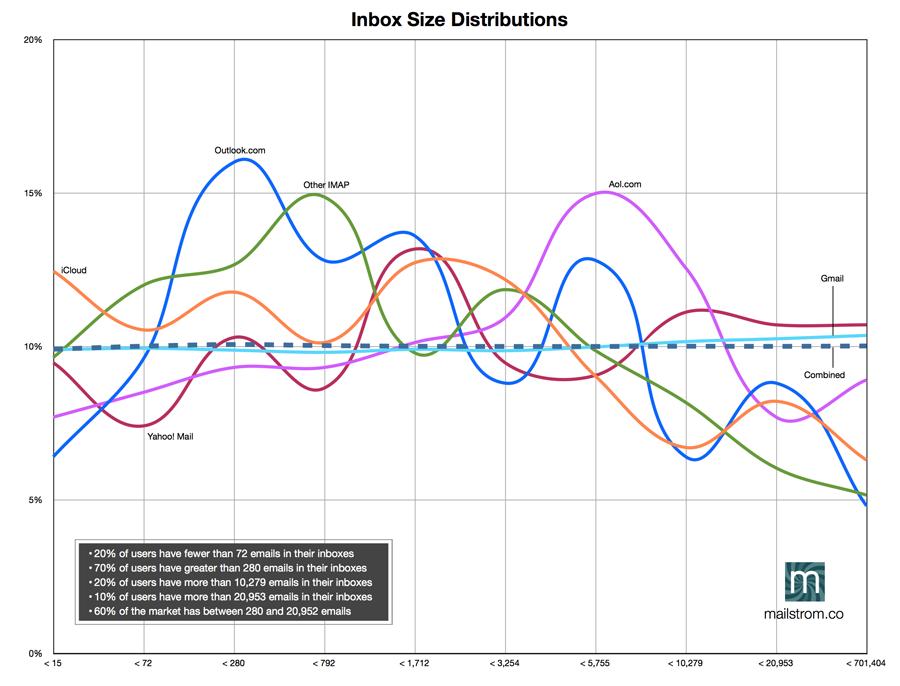 When we talk to people about these variations we hear a lot of theories: "Gmail encourages people to have big inboxes because of its archive/search features," or "My Yahoo account is my junk drawer," or "I don't check that account often."

Even when you compare different providers, though, size distributions are more or less the same. Aol and Yahoo accounts run a little bigger than Gmail accounts, while iCloud and Outlook.com (excluding legacy Hotmail) accounts tend to run a little smaller. The variation seems to be more about people than about providers. And we see that people are very, very different.

Among the inboxes we sampled, the average size is 8,024 messages. Here's how the numbers break down among the major provider classes we surveyed:

While Gmail and Yahoo! inboxes are a little larger than the other providers, the average inbox still runs a few thousand emails. Startups targeting the tidy, tiny inbox crowd take note: this is not where most of the market is.

Meanwhile, there's debate over whether folders (or labels, as they're known in Gmail parlance) are useful. They are widely used, but productivity experts suggest that complex filing systems aimed at easing later retrieval actually cost more time than they are worth. Studies suggest that searching a comprehensive archive of email is faster and better.

Still, people have come to rely on folders as a way of keeping projects separated and making mental notes about which items require followup. So we thought it would be interesting to get an idea of how people use folders. 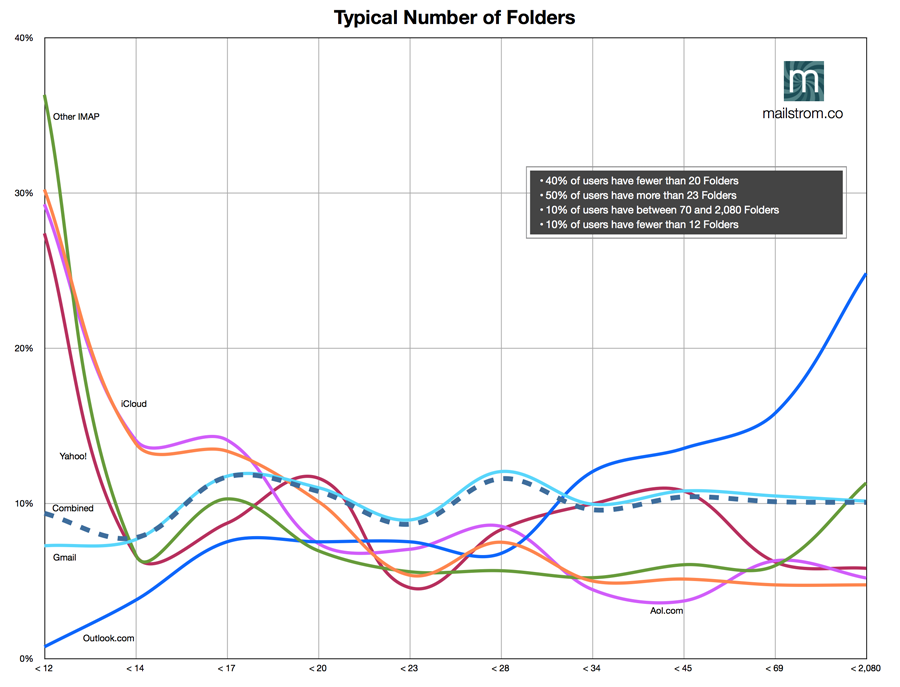 Here's how folder use breaks down across the major providers we surveyed:

On average, the users we surveyed had 37 folders. So regardless of whether folders are useful, people do use them. Some people had as many as a few thousand. Undoubtedly, there are accounts out in the wild with tens of thousands of folders that we have not yet discovered.

Email communication is the bedrock of the information economy, and it's a huge pain point. Entrepreneurs the world over are working hard on the problems that email presents. But are they building tools that will work for the average user — one with 8,024 emails and 37 folders — or are they building for some other target customer?

It is a truism that the people who are building these tools are software engineers. But engineers are — famously — not normal. They interact with the world differently from John and Suzy Q. Public. So it's little wonder that many tools conceived by techies and built by engineers don't break out to mainstream success. How often are people let down by some highly-anticipated email tool that seems, somehow, to fall short of useful for “normals?”

We say this not to disparage anyone's efforts, but merely to offer the suggestion that solving the problems of email requires awareness of how users actually use email and empathy with all users — not only the one with 100 emails, but those with 700,000 emails and 10 emails as well.