They say you can’t teach an old dog new tricks. It’s a good thing for us all then that Quincy Jones has been at the cutting edge of music technology for more than 60 years. The legendary record producer, conductor, arranger, composer, television producer, and trumpeter was one of the first musicians in the world to use a synthesizer in the 1960s while working on “Ironside,” and the first Fender electric bass before that in 1953 – technology to which he attributes the very existence of rock and roll.

This week, on the eve of his being honored with a Rock and Roll Hall of Fame Ahmet Ertegun Lifetime Achievement Award at the Nokia Theatre, Jones continues to push the technical envelope with his online piano instruction startup Playground Sessions.

These days, Jones’ focus on technology is less about bringing about new genres and methods of creating music, than ensuring that the power of musical expression is available to the masses.

“Music plays an important role in all of our lives,” Jones says. “We wake up to it. We go to bed to it. It’s there as we celebrate. It carries us through low times. But too many people are passive listeners, and not enough of them are creators. And that’s where the magic happens, baby.”

It was with this problem squarely in his sights that the music icon became an investor in and co-creator of Playground Sessions, an app that is one part Rosetta Stone one part Guitar Hero. Jones and founder Chris Vance introduced the Web app to a private audience of entertainment and tech industry supporters at the swank Bel Air Hotel on Wednesday night.

“If Guitar Hero taught us one thing it’s that, deep down, everyone wants to be a rock star,” Vance says. “The problem is that when people walk away from that game, they haven’t really learned anything.”

Vance founded Playground Sessions in 2010 while working as a marketing executive at creative advertising agency BBH. Frustrated by his inability to teach himself the piano, and unwilling to spend $60 or more per hour for private instruction, he turned to YouTube for guidance. When he found the video community lacking, Vance decided to partner with BBH’s invention division ZAG and development firm Rain in the the process of creating Playground Sessions. (For what it’s worth, he can play the piano today, although he says he won’t be filling any concert halls any time soon.)

Vance recruited YouTube piano sensation David Sides to help him create the thousands of hours of video instruction that are the foundation of Playground Sessions. The app entered beta at the beginning of 2012 and debuted publicly in February of this year, but this week was its big coming out party.

Next to Jones’ sharing his passion for fostering generations of music creators, the highlight of the night was Sides’ rendition of One Republic's Apologize. (A YouTube video of him performing the track has garnered more than 16 million views.)

I had the privilege of sitting next to Jones during the performance. For a man who has collaborated with Sinatra, the Beatles, Michael Jackson, and other luminaries, it was inspiring to watch him become engulfed in the music. While he started off quietly, a few turns in Jones was feverishly tapping his foot along with the beat and humming the melody while swaying in his seat. It was the picture of a man squarely in his element.

Sides, incidentally, scored a 99 percent for his performance according to Playground Sessions. “99 percent, huh man? That’s some kinda thing,” Jones said as the student ceded the stage to the legend.

“Kids in the US know less about music than anywhere in the world,” Jones said, beginning his prepared speech. “Music is the world’s common denominator – its intangible magic that combines the left brain and the right brain – emotion and intellect.”

Playground Sessions allows music students of all ages to tap into this magic. The software works by connecting a MIDI or USB keyboard to a PC or Mac and delivering real-time feedback to players as they progress through each lesson. A “proper tablet version” is in the works, according to Vance. 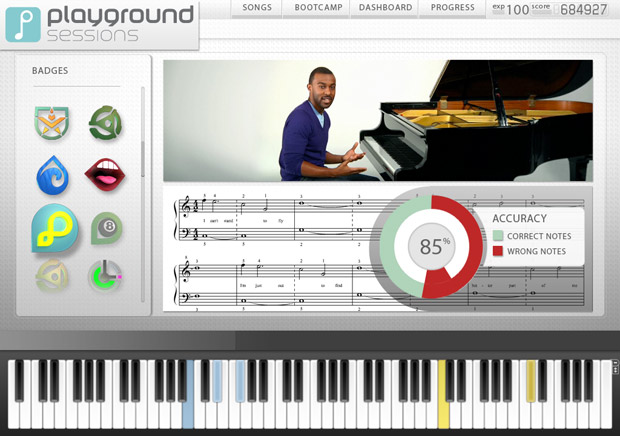 The app teaches using current Pop music, not the classical works many of us expect when thinking of piano lessons and recitals. The idea is to give students content that they can relate to, and that they’ll be excited to perform once they’re up to the task. Songs are ranked in order of difficulty, ranging from Rookie to Intermediate to Advanced.

Regardless of ability level, songs are broken down into small chunks and taught piecemeal. Beginners enter a “bootcamp” with lessons focusing on reading sheet music, keyboard skills, ear training, and rhythm. Experienced or gifted students get more challenging lessons. Each keystroke is recorded during practice and play, and the app delivers an overall score for the performance, as well as feedback and instruction around areas of weakness.

Membership to Playground Sessions costs $9.99 per month, with a one-year commitment, and $14.99 per month if signing up for just three months. The platform includes an iTunes like store where songs can be downloaded for $5.99. While that may seem like a lot for a single, each track is effectively a piece of software that includes interactive tutorials and drills. Given the cost of traditional instruction, a total cost in the neighborhood of $200 for a year’s worth of piano lessons and a lifetime of creative expression seems like a fair price. Non-members purchase individual songs and lessons, but won’t get access to many features including scoring, leaderboards, and social sharing.

With the YouTube generation turning to the internet for their entertainment and their education, it makes sense that piano lessons would follow the same path.

Jones famously produced Michael Jackson’s “Thriller” album and holds the record with 79 Grammy Award nominations (winning 27 Grammys). To have his involvement in Playground Sessions gives the project a leg up on any competition. The fact that Sides has 360,000 subscribers and 171 million video views on YouTube shouldn’t hurt either.

“So many people quit the piano because they don’t get to play music they love, just scales,” Sides says. Asked whether the piano was the right instrument for beginners, Jones said, “It’s what the symphony orchestra’s based on. Everything’s easier after piano.”