Remember Wander? Forget Wander. I never really understood what exactly the travel app was supposed to do, as evidenced by this muddled description of the company's demo 10 months ago. Judging by what the company finally released today, neither did they.

Instead, meet Days. It is the result of 10 months of focus groups, A/B testing and experimentation behind closed doors -- the exact opposite of the lean startup approach. What Wander, ahem, Days, launches today is more like a maximum viable product. The company got all of the pivots and iterations out of the way before the launch of their product, a move that I applauded last month, when the company opted not to launch at SXSW. With the volume of photo sharing apps I'm asked to try each week, it's hard to know which ones won't pivot to some new strategy a month after I've written a story about them. It's always awkward (for me, the audience, and the startup) to ask people to try an app when the founders themselves aren't fully convinced it'll work.

Wander/Days was able take its time and get its launch perfect, thanks to the luxury of a $1.2 million seed round from NextView Ventures, SoftTech VC, SV Angel (a PandoDaily investor), Google Ventures, Collaborative Fund, Red Swan, David Tisch and Kal Vepuri. 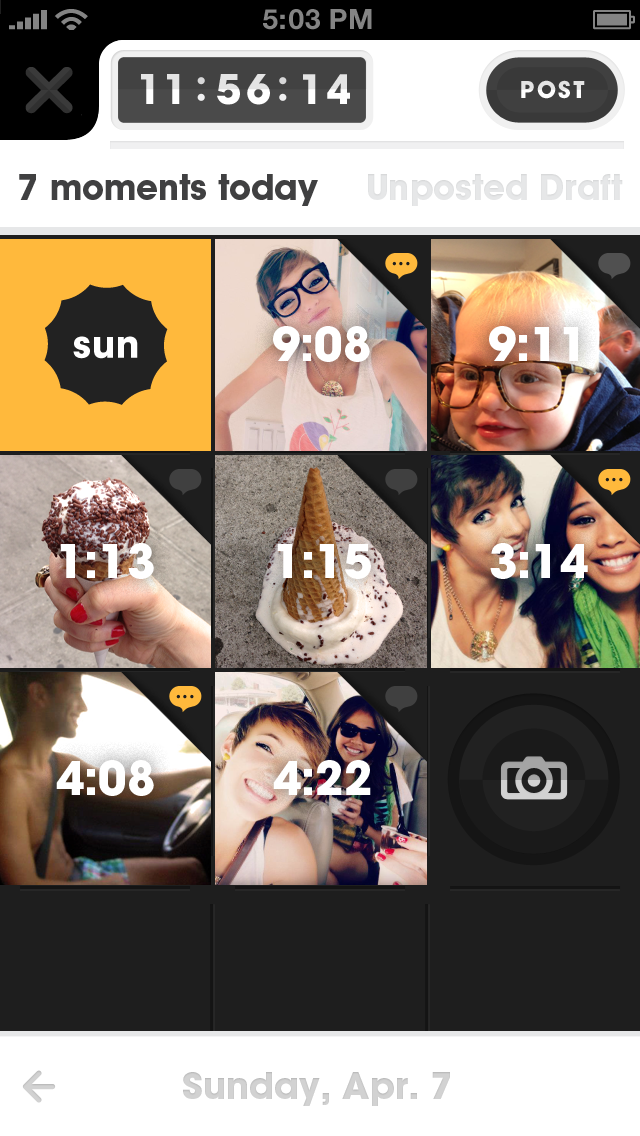 ANYWAYS, the product. Days is a record of your days, via photos and gifs. It is a way to share an image stream of the things you encounter all day, and a place for the minutia that's too lame or boring to post on Instagram, Facebook, or Twitter. Those networks are home to your extraordinary doings -- the most beautiful vacay photos on Facebook, the wittiest witticisms on Twitter, the prettiest sunsets on Instagram. The goal of Days is to take everything, from your breakfast or the front door of your office, to your meeting room, your grocery trip, and your commute home. It sounds boring, but all together it paints a portrait of your day that your friends and family don't typically see. The content shared on Days resembles what it'd like to shadow someone.

By now we're all sick of photo sharing apps, but I'm writing about this one because it fits neatly into a two key themes I've been tracking.

1. Storytelling. We're creating so much disparate content that lives in separate, often walled-off, parts of the web, and our use of various social media tools is only getting more fragmented with each new app that gains adoption. Days tells the story of your day; it's a comprehensive all-in-one-place look at what you did, versus various snippets scattered across the web. One way Days promotes a complete story is with a 24-hour rule. You can't share photos in real time. Instead, you share the entire stream of your day the next day. It's a nice way to slow down the never-ending stream and look at the fuller picture.

2. Authenticity. We are sick of being "brand managers" of our Facebook pages, which we curate to present a perfect version of ourselves. Instagram and Twitter are no better. That's why apps like Snapchat and Whisper have exploded, particularly among teens: they allow users to be themselves, either for a disappearing moment in time as on Snapchat, or totally anonymously as on Whisper. 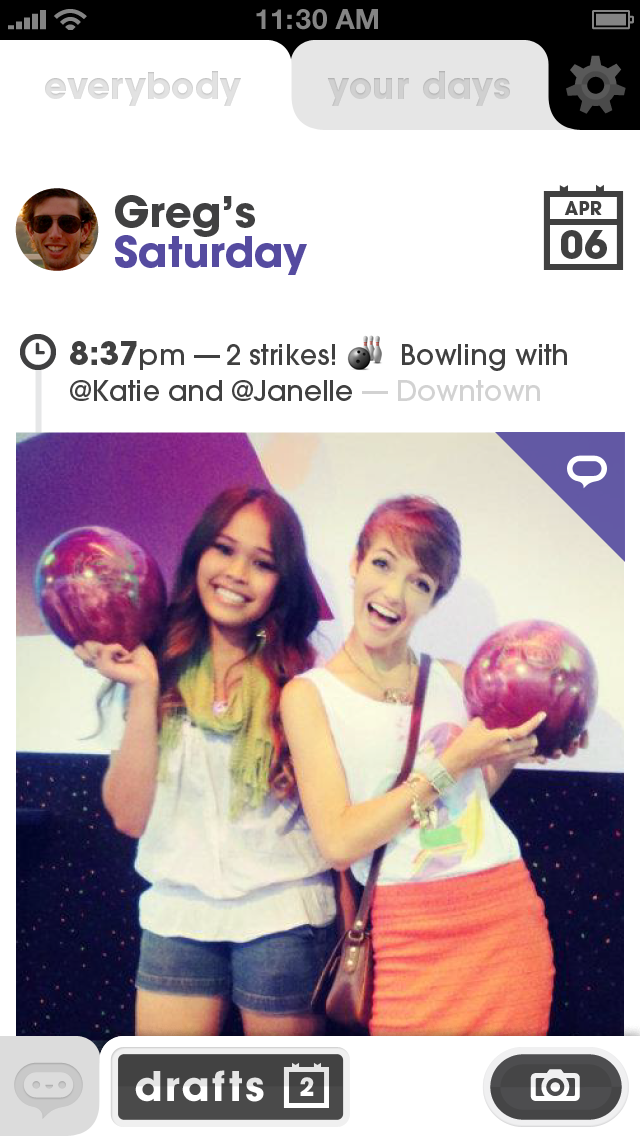 Days has a feature in common with Snapchat -- users can only share photos taken with the Days app. The lack of imports means Days wants to replace your camera as the go-to place to dump every pic. Photos are still saved to your camera roll if you want to share them on Instagram or Facebook later, too. And Days has no filters, no editing. The goal is to create a complete and realistic portrait of your day.

All that said -- I am not the target market for Days. I like it, but I don't take that many photos throughout the day and I never made a habit of using the Days camera over my regular camera. That doesn't matter though -- this app has been tweaked within an inch of its life to suit teenagers, who share everything, take a million photos a day, and want authenticity online. If they liked Snapchat and Whisper, they'll like Days.

Oh, and there are gifs. Did I mention the gifs?