Startup hustle: Why two men decided to sleep together in a van for months on end

When Kevin Hong left his Wall Street job to become an entrepreneur, he didn’t know it would mean living in his underpants in a van for months at a time.

The 28-year-old co-founder of Dealflicks, a one-year-old startup that bills itself as "Priceline for movies," now spends most of his time going from city to city in his dad’s van with fellow founder Evan Pham, trying to sign up movie theaters to its online discounts program.

Taking bootstrapping to the next level, Hong and Pham shower at gyms, cadge breakfasts at hotels, and barter candy they get from conferences for meals at restaurants, all while the startup’s other three founders run the business from a co-working space in San Francisco. At night, the two sleep on a mattress in the van, a Toyota Sienna that Hong got from his father in exchange for his Acura TSX just before starting the trip in March. The guys ripped out the van's back seat so they could fit a queen-sized mattress in the vehicle. They often hang shirts in front of the windows so passers-by can’t see in.

“I’d never thought I’d actually have to go through this as an entrepreneur,” says Hong, speaking via Skype from a McDonald’s in Chippewa Falls, Wisconsin, one of the trusty wifi-friendly spots the guys frequent. (Hotel lobbies also serve as reliable temporary offices.) 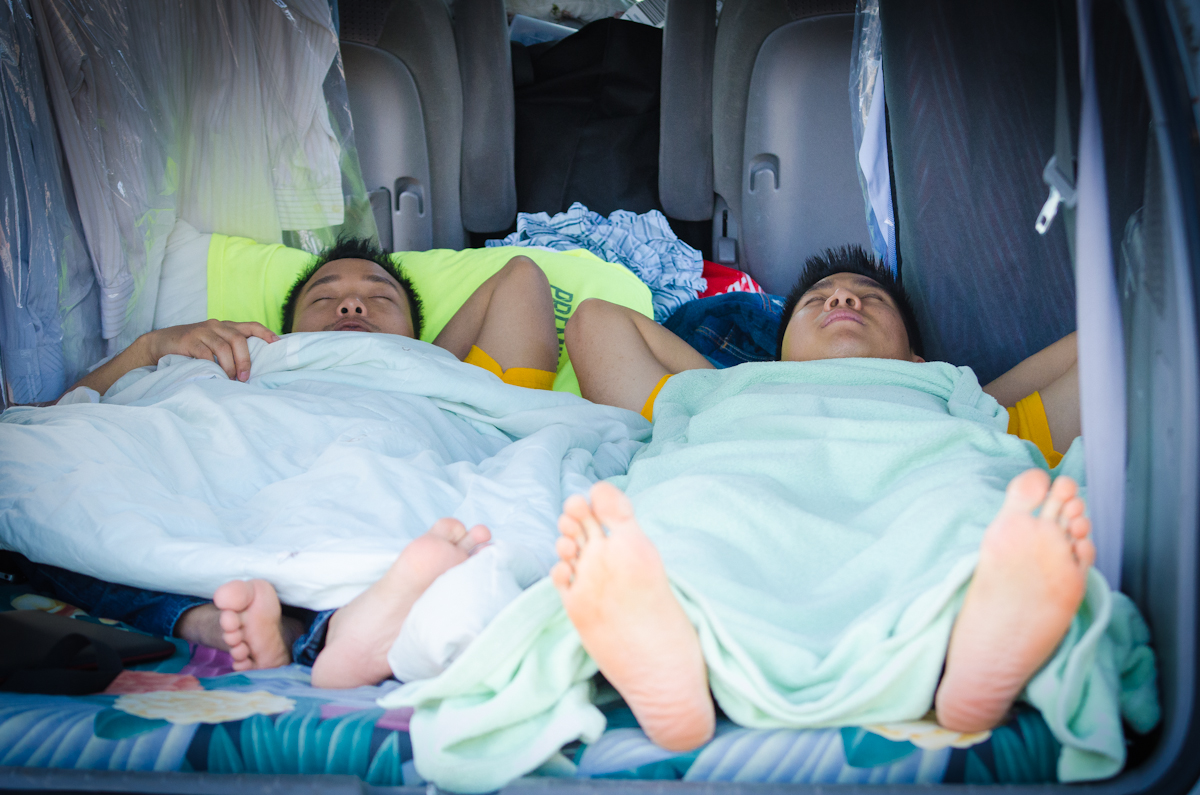 Hong and Pham relax in bed

The whole idea behind the epic road trip, which has so far taken them more than 15,000 miles and to more than 20 cities, was that face-to-face meetings are better than phone calls. Dealflicks took 10 months to sign up their first 100 theaters. They got six of them by phone and email only, and three through a contractor, but 91 of the deals involved some sort of in-person interaction. To get serious traction, they had to start knocking on doors around the country. So, starting first in the warmer southern states, they did. The strategy has paid off. In the last three months alone, they’ve signed up close to 45 theaters.

“What we’ve found over time is that especially in the theater industry it’s a very relationship-driven business,” says Pham. “If you don’t make face-to-face contact with them, you’re at the bottom of their priority list.”

For most bootstrapped startups, putting two sales people on the road full-time would be prohibitively expensive, but Dealflicks has figured out a way to make it work. By sleeping in the van, not buying many meals, and at times using baby wipes in lieu of showering, Hong and Pham have managed to keep the whole expedition cost neutral. Because they don’t have to pay rent or bills, they’re saving about $2,000 a month. Their main expense is gas money, which sets them back about $1,500 a month.

They’ve also found that their story helps open doors. Not only is it a good icebreaker with girls – a front on which they confess to having a conversion problem – but it also provides a point of difference for when it comes to dealing with theater managers and owners. Several clients have referred to the duo’s mobile accommodation as a “manvan.”

Despite the occasional hardships of startup life, Hong says he doesn’t regret leaving his job as a stock trader. “It’s totally worth it, every moment of it, because you’re actually materializing on what you envision,” he says. “In corporate America, they dangle a carrot in front of you and you just hope to earn your next bonus.”

In the meantime, Hong and Pham have concluded that living out of a car is totally feasible. They intend to continue their nomadic lifestyle for quite some time.

At the very least, it saves on rent.