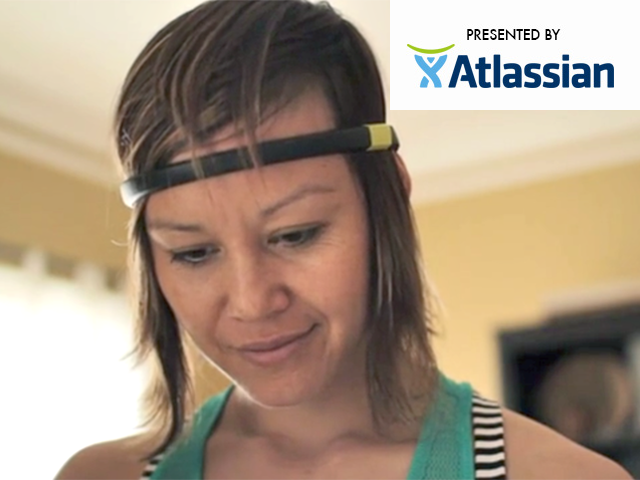 The quantified self movement and the wearable computing devices that make this type self-measurement possible have reached full blown fad status. Dozens upon dozens of companies have introduced hardware and software solutions to measure the quantity of our movement and the quality of our sleep. What we have yet to see from a mass-market consumer product is anything that measures our brain activity.

That changes today with the introduction of Melon, an EEG (electroencephalography) powered headband and accompanying mobile app (iOS only, initially) that allows wearers to measure, understand, and improve their mental focus. The company has launched a Kickstarter campaign seeking to raise $100,000 to complete the first “large-scale production run of the headband and finalize and launch the app.”

The first 100 backers to donate $79 will receive a Melon headband in their choice of color, while late adopters will have to pay $99 for a standard band, or $159 for a custom engraved model. $1,000 gets up to five generous backers dinner with the founders and a choice of all available Melon head band configurations.

When I first heard the Melon pitch – a one minute teaser to a room of over a hundred onlookers – I was skeptical to say the least. But after spending time with the company's founders and demoing the product, I'm singing a far different tune. It's still too early to predict whether Melon will be a winner, but I am now certain that the category of mental performance monitoring and optimization will play a prominent role in all of our futures.

Originally founded in Boston under the name Axio, the company now known as Melon is a member of the current class of Santa Monica’s Launchpad LA accelerator. Melon first debuted its product concept last summer and was able to raise $150,000 in angel funding from a group of individual investors, including Avid and Wildfire founder Bill Warner, to complete prototype development. The company will take in up to $100,000 in additional funding through Launchpad prior to its Kickstarter campaign or seeking any additional Seed financing.

Melon’s three founders include two cognitive and computer science experts – Arye Barnehama and Laura Berman, who studied together at Pamona College – and an electrical engineering expert, with a focus on measurement devices – Janus Ternullo. The company has also partnered with consumer EEG technology leader NeuroSky to implement its signal amplification and filtering.

The goal of the platform is to combine these technologies and areas of study into an easy to use product that allows consumers to better understand themselves and the factors that affect their mental performance. In new age yoga-speak – wow I’m sure that was offensive – this is known as “mindfulness.” For techies, it comes down to “lifehacking.”

By measuring brainwave activity in the prefrontal cortex while the user completes specific tasks, such as practicing yoga, listening to a particular genre of music, or deep breathing, the app tracks changes in mental performance. The app can also alert the user to a loss of focus during a period of prolonged activity. Over time, the goal is that users gain an understanding of the particular tricks that are personally most effective and design their routines to achieve greater productivity and happiness.

If nothing else, it will measure just how fast that little hamster in your brain is running and how various inputs affect his mood. In addition to tracking brain activity, the Melon mobile app provides games and other visualization tools to train optimum neural performance. (The company’s demo video gives a good sense of both the hardware and mobile app.)

Compared to crude early prototypes, the current iteration of the Melon headband is downright sexy. Having demoed the product, I can say that the lightweight yet sturdy rubber and neoprene construction is impressive given that it was created by a small three person team on a limited budget. The minimalist device – which comes in white and black, with customizable color bands and in sizes small, medium, and large – contains several small electrodes, a bluetooth radio, and a micro-USB port for charging and developer integration. The device will operate for eight hours between charges

While the concept of strapping a series of sensors to one’s head may seem too futuristic and awkward for most, the actual appearance of the device could be described as athletic and hip. It’s certainly far less obnoxious than Google’s cyborg glasses that have sent the Internet into a frenzy over the last year. Taking a look at this Israeli EEG headset used for detecting strokes and this Belgian version aimed at epilepsy detection and it becomes clear that Melon deserves a design award.

There’s no arguing that the quantified self movement has some serious momentum. But that said, it’s still the domain of tech early adopters, performance-minded athletes, and other power users. For Melon and all other tech within the category to gain mass market adoption, the platforms need to extend beyond the novelty of accessing personal behavior and performance data, and into the realm of providing actionable advice on how to benefit from such knowledge.

Melon takes the first steps toward this Holy Grail, but has a ways to go before you’re likely to see the devices on the heads of grocery store shoppers and boardroom executives. The company’s Kickstarter campaign will offer initial funding, yes, but more importantly it will offer the opportunity to gather consumer feedback and measure interest, both of which should inform future product development and marketing efforts.

I am confident that we are headed toward a future in which every action, conscious and subconscious alike, is recorded, measured, and analyzed by the various sensors and systems surrounding us. That future may still be a number of years out, and Melon may or may not still be around to capitalize on it, but they company is a trailblazer nonetheless. I’ll tip my headband to them, once it comes in the mail.