You know that moment when you’re rushing to catch the bus and you realize you don’t have the exact cash fare in your pocket? GlobeSherpa claims it is going to change that. Today, the Portland-based startup announced the launch of the beta program for its mobile ticketing service for the entire Portland TriMet public transit system.

This means participants can buy and use tickets for any mode of public transit using just their smartphone.

The mobile ticketing platform allows people to "register their debit card and buy their tickets anywhere anytime directly from their device,” GlobeSherpa CEO Nat Parker told me. Today only about 200 participants are able to do so, but the company plans to unroll the program fully sometime this summer.

Mind you, mobile ticketing for transit is not some brand new idea. Boston’s MBTA has been unrolling a mobile ticketing service for its commuter rail, allowing users to show their phone’s screen to conductors in lieu of paper tickets. New York’s MTA claims it is working on a similar program for its Metro-North commuter rail system, and has tested a system for its New York Waterways Ferry System. Hell, even New Jersey is catching on and testing out a similar program for some of its trains.

What makes GlobeSherpa’s program important is that it is the first mobile ticketing service for more than one mode of transportation that is centralized onto one platform. “We are the first in the nation to serve a major multi-modal system,” Parker said. “We’re serving commuter rail, light rail, busses, and street cars.”

In addition, the startup emphasizes the efficiency this creates for both users and transit agencies. In the press release, Parker claims it will “reduce the cost of fare collection, help optimize fleet operations, and improve the rider experience." 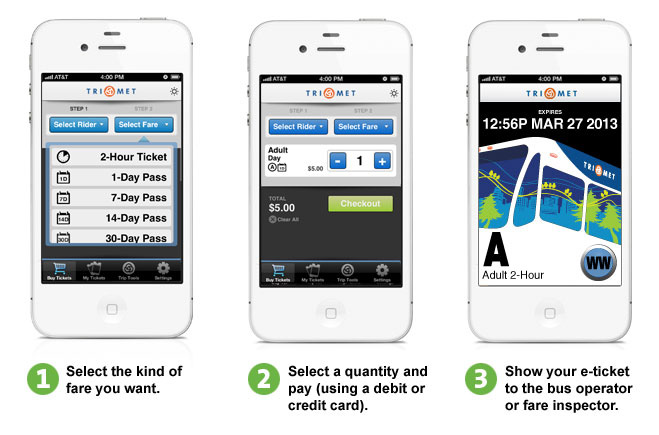 All of this is great, but how will it expand beyond Portland? I lived in Portland for five years, and admittedly TriMet is one of the better transit systems out there. TriMet was the first to integrate Google maps, as well as one of the first programs to use real-time arrival times and allow third party trip-planning APIs.

However, TriMet’s success may be due to the relative small size of Portland, as well as the city’s general ease of navigation. (There’s a reason Portland is considered the most bike friendly city in the country.) Also (and this is a serious point), people are much nicer in Portland – especially bus drivers. This makes it much easier to implement an experimental program involving potentially wonky mobile platforms. If anyone’s dealt with the buses in New York, they know how abrasive and sometimes scary it can be. Not to mention the potential multi-modal problems of integration with big subway systems could be a huge headache for New York’s already headache-y MTA system. If anyone recalls, a few years back Visa attempted to do something like this. Since the program was never renewed, I doubt it went as planned.

Parker, however, is aware of all this and explained that GlobeSherpa does intend to expand to bigger markets like New York and Boston. The Portland program is its first venture, but he already envisions ways to incorporate subway turnstiles and bigger, less accessible cityscapes into the mix. He explained that in Europe technologies like these already have a stronghold for transit systems. “The US is just a prime market to grow into the technology and provide that convenience to riders,” he rebutted.

As a New Yorker I’m excited for this being the wave of the transit future. Given that GlobeSherpa isn’t just focused on public transit systems but on making better mobile pay platforms, there’s a real market for all of this. Parker told me that dozens of transit companies have already contacted the company, and he hopes to have more news in that regard in the coming months. To add to that, it plans to implement its technology for parking payment programs as well as event ticketing. So this TriMet launch may be just the beginning.

And if it means that sometime in the not-too-distant future I’m able to not miss a train because I’m stuck trying to complete a kiosk transaction in Spanish because I by mistake pressed “Español," well, then I’m completely on board.