At D11 today former analyst and current Kleiner Perkins partner Mary Meeker offered two  presentations about the current state of technology. One looked at Internet trends in 2013, both nationally and internationally. The other offered a glimpse into an oft-overlooked subject: immigration, which, she points out, has had a profound impact on the startup ecosystem in Silicon Valley and beyond.

While 13 percent of the population are immigrants, with only 1 percent of them high-skilled workers, first or second generation immigrants to America have founded 42 percent of Fortune 500 companies, and in the process created 10 million jobs and $4.5 trillion in annual revenue. Immigrants started half of all tech startups originating in Silicon Valley, including a third of all semiconductor and computer companies, and 60 percent of the top 25 tech companies, a list that includes Apple, Google, IBM, Oracle, and Amazon. Beyond technology, immigrants or children of immigrants comprise 42 percent of scientists at the seven top cancer research centers.

Yet America suffers from a severe shortage of engineers and other highly skilled labor. Five high tech companies – IBM, Intel, Microsoft, Oracle, and Qualcomm – have openings for 10,000 positions they can't fill. Companies are hamstrung by hard caps on the number of H-1B visas available. The US issues 85,000 H-1B visas a year but there's need for at least 150,000. 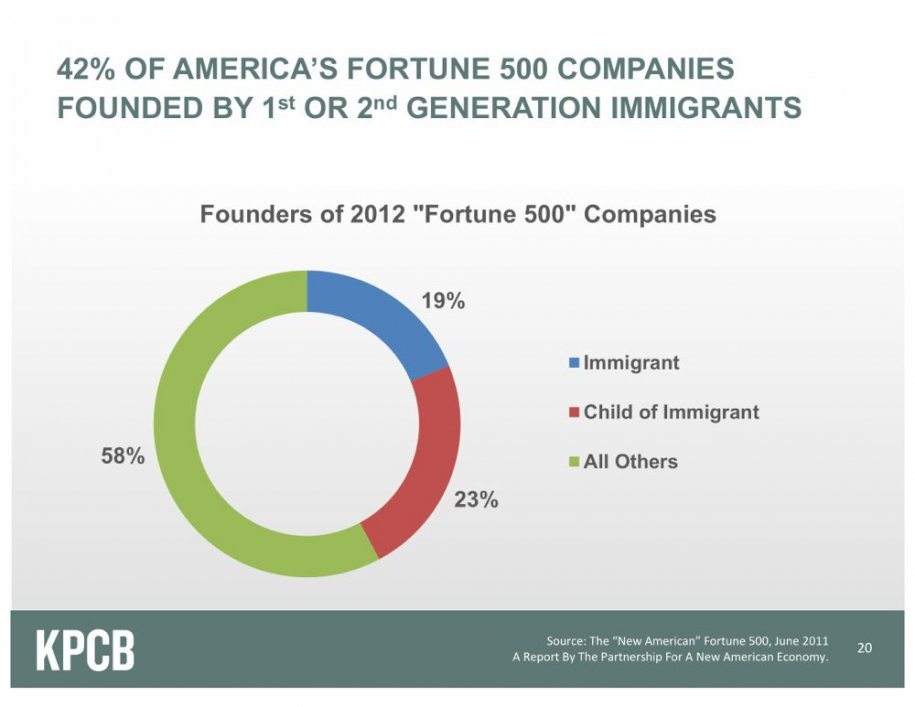 This statistic alone highlights the need to reevaluate how we conceptualize immigration. Meeker quotes Stanford University’s president John Hennesey, who said, “Forcing [international students] to leave, rather than allowing them to stay and add their skills and knowledge to our economy, is one of the most short-sighted policies we have.”

All of this points to the need for immigration reform, something that has been stalled by a bitterly divided congress. The tech-based lobby group funded by Mark Zuckerberg, Fwd.us, has made immigration its primary policy goal. However, the group’s tactics have been met with a stream of criticism.

Perhaps Meeker’s battle cry to the tech community today will amplify this message. Because startups are starved for engineers and other skilled workers. In the long term (and ideally) we would, as a nation, confront our dismal education system, which doesn't graduate nearly enough computer-literate people. In the short term, our best bet is to do what we do best: Import what we need and get rid of policies that only serve to undermine our economic well being.