Zynga is in the dumps. With its share price now hovering around $3, down from $10 at the time of its December 2011 initial public offering, and mass layoffs that have cost it 18 percent of its workforce, it's hard to imagine a grimmer scenario for the social gaming giant.

Supercell, on the other hand, is going bananas. The small Finnish company, which so far has just two games in circulation, is Accel Partners' fastest-growing company and is now pulling in $2.4 million a day (mind you, that figure is two months old – it could be even more now).

It's easy to point to Supercell and say, "Zynga has it all wrong – it should be taking this approach." That might turn out to be false. Supercell is young and has only two games to its name. Although it is off to a great start, it has yet to prove itself over the long term.

However, it is at least interesting from an academic point of view to consider the key differences between the two companies – one tanking, the other ascendent – because it does at least give us an indication of just how much has changed in the world of gaming, and in Internet-based businesses in general.

So, here we go. The five key differences between Zynga and Supercell are...

Reviewing a successful 2012, Supercell CEO Ilkka Paananen said that the biggest lesson he took from the year was the importance of focus. “In my experience, it's one of the most important things and also one of the hardest things to get right," the CEO said. "It really means you have to be this guy who says no to all the time to all kinds of things. Focus is really not what you do, but what you don’t do.” 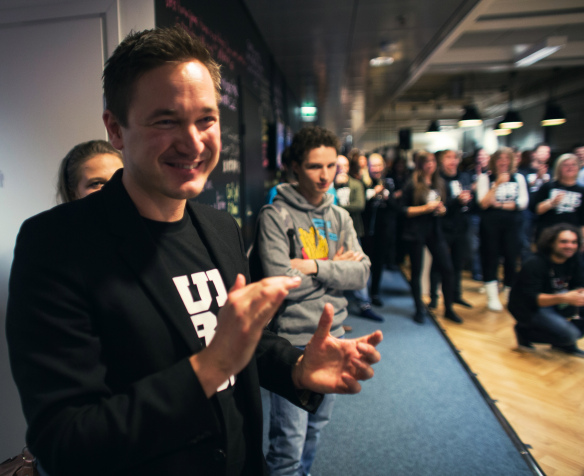 Supercell has honed focus into a fine art. Rather than try to capitalize on the success of its two runaway hits – "Clash of Clans" and "Hay Day" – it has stayed the course with those games, learning from analytics, improving the mechanics, and nurturing their giant communities. In the meantime, it continues to work on new games, but it refuses to release any substandard products. Furthermore, each game is worked on by a "cell" – usually consisting of about five people.

Zynga, by contrast, produces dozens of games, some of which are hits – "FarmVille," "Words With Friends," "Draw Something 2" – but many of which are mediocre or, worse, mere copies of existing games produced by competitors, a strategy the company refers to as the "fast follow." 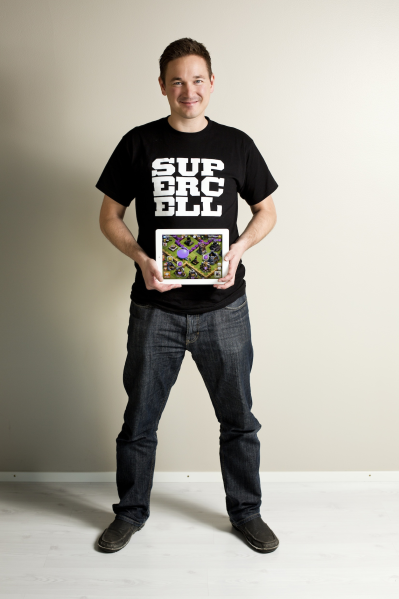 Paananen with "the ultimate gaming device"

Supercell's first game was "Gunshine," a Flash-based game designed for play on Facebook or in the browser. When it failed to take off, Supercell shut it down and decided to go all-in on the tablet. It now designs games first for iPad – which Paananen considers the ultimate gaming platform – with versions also available for the iPhone. This strategy also fits into the company's "stay focused" mindset, which explains why neither "Clash of Clans" nor "Hay Day" are yet available for Android.

In a sense, Supercell was lucky that it was just getting started when the iPad was introduced to the world. Zynga's timing was not so fortunate. It launched as a social gaming company that relied heavily on Facebook. As we have since learned, that dependent relationship ultimately cost Zynga heavily. It is now struggling to adapt for a mobile-dominated gaming environment, but it suffers the handicap of legacy baggage from its early years.

Zynga was the most prominent of the early movers in "social gaming," relying on the virality of social sharing to help distribute and popularize its games. Supercell, on the other hand, takes a different approach to social. Rather than use social elements to draw in more players to a particular game – "Sign up so I can challenge you to a game of crosswords!" – Supercell integrates social deeply into its games, so that interaction with others actually improves the playing experience. Social then becomes a vector of engagement rather than distribution, and engagement is key to the longterm success of a game.

As Erin Griffith pointed out yesterday, Zynga provides a prime example of how not to scale.  As she put it, "That the company laid off 18 percent of its work force yesterday was a drastic move; the realization that 18 percent of its work force is 520 freaking people is almost more shocking." Until yesterday, Zynga had 2,800 employees – fairly bloated, I would argue, for a seven-year-old social gaming company.

Supercell on the other hand is decidedly lean. Its headcount is now up to about 100 people, even though its 2013 runrate for annual revenue is sitting at about $800 million. Paananen doesn't want the company to get big – he just wants it to be good. “It doesn’t make any sense to me that some companies are bragging about how big they are in terms of employee count,” he told me last year. “Our strategy is completely the opposite. We actually want to stay as small as we can.”

In a Reddit AMA today, a person claiming to be a laid-off Zynga staffer went into detail about the company culture. The company went out of its way to keep its staff happy. As the Reddit user "former_zyngite" described, Zynga offered:

"Lots of perks, like a gym in the building, three free meals a day, happy hour every Friday with free booze, unlimited vacation days. Not everyone takes advantage of them all. I loved getting a free 15 minute massage once a week." 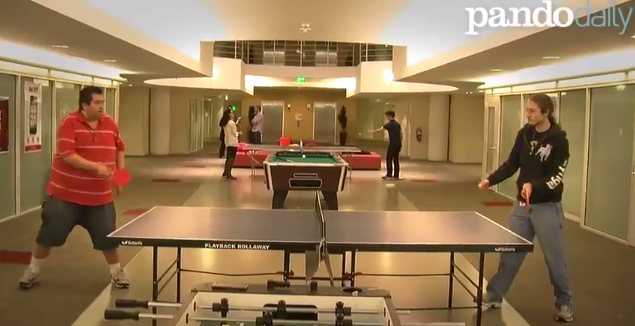 Workers on top-grossing teams got additional perks, the user later added, including trips to Las Vegas and off-site excursions. The unlimited vacation days, however, often meant that people felt more pressure when asking for days off, because they couldn't rely on mandated holiday time. The Reddit user painted a picture that suggests Zynga employees are pampered but overworked. You can make up your own mind by checking out our video of what Zynga's San Francisco office is like on the inside. It shows not only the expansive gym, but video gaming areas, a "time travel tunnel," and a beautiful cafeteria featuring a farmer's market, in-house butchery, and Zynga-made Kombucha. 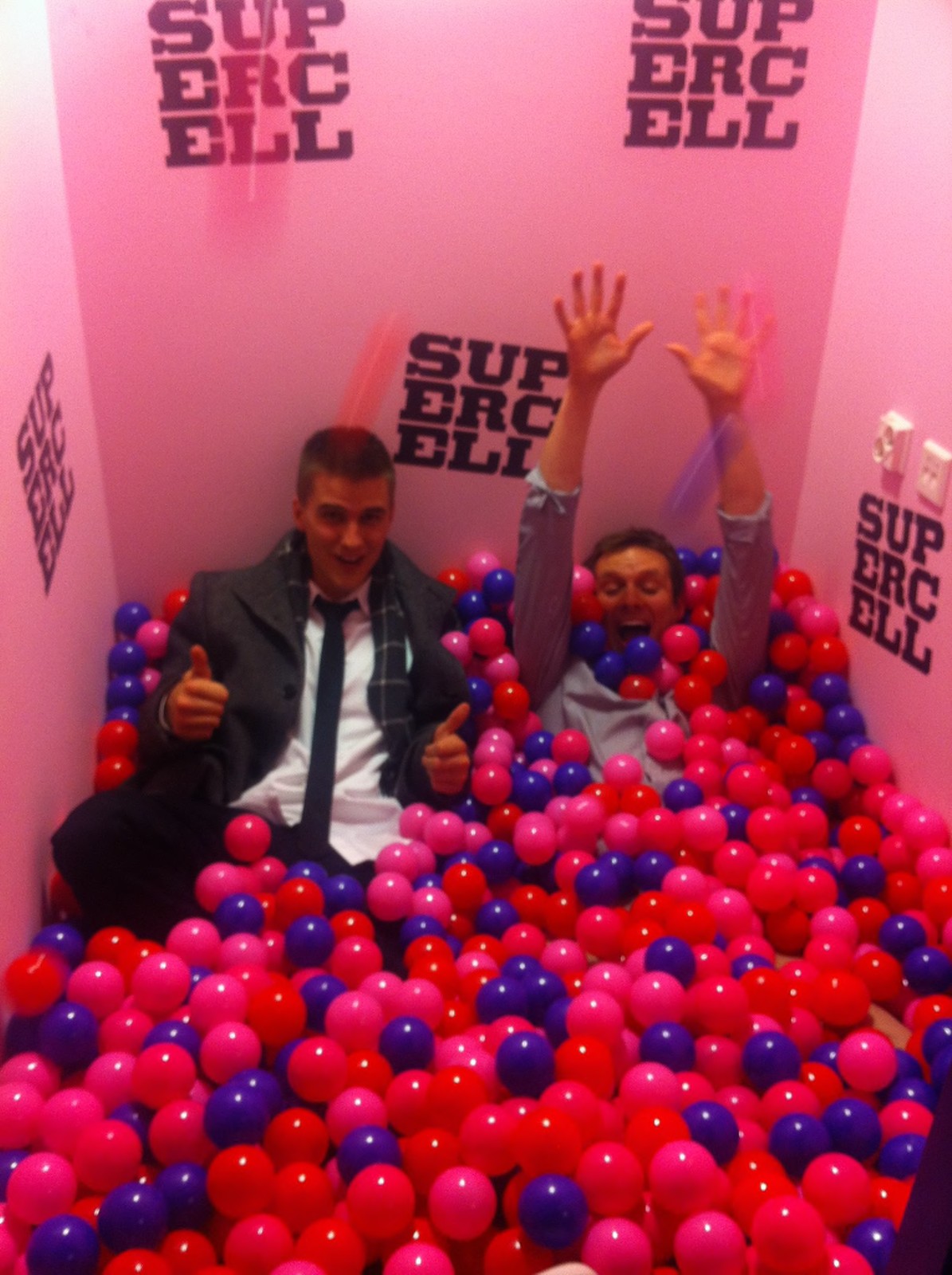 Supercell, on the other hand, has a more modest approach to keeping its staff happy. While it does have a small ball-pit and a pretty nice kitchen in its office, housed on a single floor of a city building vacated by Nokia, there is not a single sign of ostentation. In the Finnish tradition, everyone leaves their shoes at the door and walks around in socks. The staffers are diligent but don't seem over-stressed or over-worked. The office is mostly empty by 5.30pm each day – the Finns believe in spending more time with their families than they do at work – and everyone takes full advantage of the mandatory five-week vacation allotment. They may be short on in-house Kombucha, but it seems a reasonable way to keep employees happy for the long term.

[Disclosure: I bought up a small holding in Zynga – 94 shares – when its share price hit nearly $3. I'm about to sell it all.]