“What I would like to see right now is for people at these internet companies to stand up and say the truth, all of it, about their dealings with the NSA.” – Michael Arrington 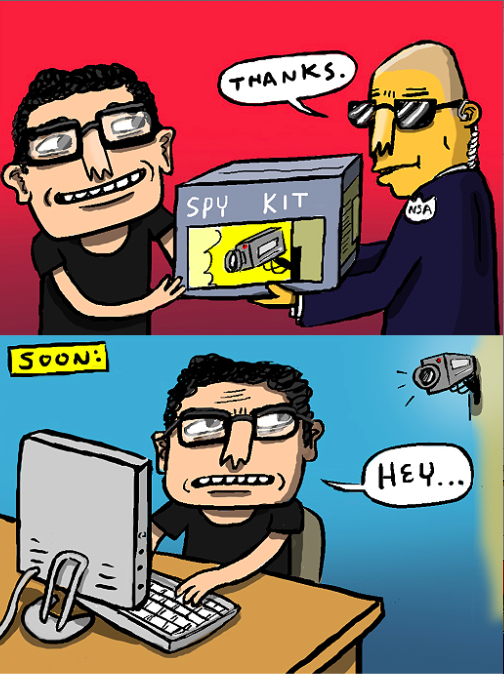 [This article first appeared on NSFWCORP]

It is shocked to discover that the National Security Agency has been systematically spying on the phone metadata of millions of Americans. It is shocked that the same NSA has also been demanding that tech giants like Google, Facebook, and Paltalk provide a secure drop box for handing over subpoenaed data. And most of all Silicon Valley is shocked that the executives at those companies, and who knows which others, have so willingly acceded to the agency’s demands.

Michael Arrington, the well known tech investor (including, important disclosure, $25,000 in NSFWCORP*), summed up the outrage neatly in a blog post entitled “Cowards”...

Will not one tech CEO stand up and tell the truth?

The NSA story of the secret assassination of the Fourth Amendment continues to unfold. Today we heard from Google CEO Larry Page and Facebook CEO Mark Zuckerberg.

Page was confused (the title of his post is ‘What the…?’). Zuckerberg claimed the press reports were outrageous. Both made strong denials of specific allegations (‘direct access,’ ‘back doors’). Both were technically telling the truth. Both were also overtly misleading people.

So…much…false…indignation. In a follow-up post, he goes even further – imagining a terrifying dystopian world in which... well...

…sitting around the NSA office one day an analyst has an idea. Like, ‘Hey, let’s find Republicans in Wyoming who have Facebook or Twitter friends with someone outside of the U.S. And then cross reference that with concealed carry permits. I think these guys might be gun running. Can I get a high five!?

Our guy fills out a form in PRISM, I imagine, with his query. The damn Twitter doesn’t do Prism and needs a more formal order, probably requiring someone to wake up the secret judge and tell him to get that stamp ready. And then they send off the order in a variety of ways and demand a response in 24 hours or something.

Hey, bring up those Verizon records and see where this guy’s been. Damn, he goes to the range nearly every day. I wonder if he’s complying with every single Federal and state gun law. Let’s send an agent down to chat with him. And if he gives you any shit just show him this picture of his mistress Verizon sent over. That’ll shut him up.

WAIT! Here’s a frickin video! oh man, I’m sending this to myself. No, hold on guys, I’m doing this. Ok, now, show him this video of himself in a compromised position with his girlfriend and ask if we should sent it to his wife at their home address, it’s right here.’ Arrington, along with the rest of Libertarian-leaning Silicon Valley, is right to be wary of the way the government is able to use technology to track our every move. He's also right to criticize the double-speak of any Valley company that prevaricates on its true level of involvement in programs like PRISM.

The only odd thing is why Arrington doesn’t go even further in connecting the dots fully between Silicon Valley and government snooping.

If we’ve learned anything in the past few days it’s that the NSA does precious little of its own spying, relying instead on companies like Palantir and Booz Allen Hamilton. Indeed, Palantir is just one of dozens -- hundreds? -- of Silicon Valley companies developing and operating the tools used by intelligence agencies like the NSA. If the dystopian drama that Arrington imagines ever actually plays out, it’ll likely do so using tools created by a private company located within a dozen miles of Palo Alto.

As the Financial Times’ April Dembosky reminds us, the relationship between the Valley and Homeland Security is nothing new. The Internet started out as a government project, designed to keep communication lines open in the event of a nuclear attack. In 1999 the CIA established In-Q-Tel, a venture capital fund to invest in technology companies that might be useful to the folks in Langley or Fort Meade.

A look at In-Q-Tel's board of trustees shows how close the relationship between the geeks and the sneaks has become. The board is almost indistinguishable from that of a major Valley VC firm: Jim Barksdale former CEO and President of Netscape sits next to Howard Cox of Greylock, sits next to Ted Schley of KPMG... sits across from David E. Jeremiah, the Chairman of Wackenhut Services Inc and AB "Buzzy" Krongard, Former Executive Director of the Central Intelligence Agency.

In-Q-Tel's investment portfolio, at least on first glance, also seems remarkably similar to that of a regular Valley fund, with Web 2.0-y names like "illogic" and "Delphix" and "Connectify." The only difference is that the companies on the list are all “focused on new and emerging commercial technologies that have the potential to give the CIA and broader US Intelligence Community (IC) mission-advantage today and in the future.”

The interest in big data is typified by Cloudera, in which In-Q-Tel has invested twice. According to the Palo Alto-based company’s website:

With Cloudera, businesses and other organizations can now interact with the world's largest data sets at the speed of thought — and ask bigger questions in the pursuit of discovering something incredible.

“Other organizations.” Emphasis mine.

For video surveillance, the CIA has backed companies like iMove (“Look everywhere / See everything / All the time”) and 3vr (“allows video surveillance systems to reach their true potential”) both of which provide tools to refine and then analyze huge amounts of CCTV and surveillance data for intelligence agencies.

In-Q-Tel’s investment in encryption companies like Mocana, meanwhile, are a conspiracy theorist’s dream: Who better to trust with encrypting the data stored on your smartphone than a company part owned by the CIA?

How is it possible, then that Mr. Arrington is so furious at the NSA, so disappointed by their Silicon Valley enablers but has nary a peep about Valley startups which take CIA money to build the very technology that is taking away (our capital "L") Liberty?

Let’s do some data mining of our own, shall we?

According to CrunchBase – the technology investor database founded by Arrington himself – Cloudera, iMove, 3vr, and Mocana – all share one additional investor in common: SV Angel, one of the Valley’s most prolific “micro VC” firms. And whose name do we find on the firm’s list of limited partners? One Michael Arrington. (In a neat piece of symmetry, SV Angel’s co-founder, Ron Conway, is an investor in Arrington’s CrunchFund.)

Once you start digging into the data, the connections get really entertaining: Arrington is also an LP in Benchmark, which invested alongside In-Q-Tel in data-storage company Decru. And in Andreessen Horowitz, which co-invested with In-Q-Tel in Silver Tail Systems and Platfora. CrunchFund also invested in Facebook, which boasts Palantir’s Peter Thiel as a board member, and from where former data team leader Jeff Hammerbacher left to head up technology at Cloudera.

Of course, as a limited partner in SV Angel and the rest, Arrington almost certainly didn’t get to choose the companies in which to co-invest with the CIA. The fact that he stands to profit, perhaps handsomely, from their success is just a happy coincidence for the man who last week railed against spy technology which “kills liberty and freedom on a scale never seen before. It’s not a way to stop terrorism. It IS terrorism.”

For a more direct example of Arrington embracing the technology he calls on others to resist, you have to look to a company called Skybox Imaging, which raised $70 million from a number of major Silicon Valley investment firms including CrunchFund. Skybox plans to put 24 satellites into orbit in order to “empower commercial and government customers to make more informed, data-driven decisions that will improve the profitability of companies and the welfare of societies around the world.”

If that line about improving “the welfare of societies” didn’t creep you out, the company’s list of advisors certainly will. Step forward Jeff Harris, Former Director of National Reconnaissance Office and Lt. Gen David Deptula, Former Deputy Chief of Staff for Intelligence, Surveillance and Reconnaissance

Closer to earth, CrunchFund is also an investor in the gloriously named Prism Skylabs, which debuted at TechCrunch Disrupt, the startup competition founded by Arrington (and – another disclosure – twice hosted by me). Prism negates the need for costly satellites by allowing companies to tap into existing CCTV technology to detect patterns of behavior which might be, well, interesting. Interesting to whom? Perhaps Mr. Arrington could ask the CIA-backed 3VR who just signed a partnership with Prism Skylabs to increase integration between the two services. Or he could speak to Prism Skylabs CEO Steve Russell who, before founding Prism, was founder and CEO of 3VR.

Honestly, though, I’m being unfair in singling out Michael Arrington here. Really the only remarkable thing about his involvement with CIA-friendly big data companies is his hypocrisy in attacking those Valley luminaries who won’t admit to exactly the kind of spying his portfolio companies help facilitate. (In the hypocrisy stakes, though, Arrington comes a distant second to Ron Paul who this week told Fox Business, "I'm worried about, somebody in our government might kill [Edward Snowden] with a cruise missile or a drone missile," after Snowden exposed the mass government surveillance facilitated by companies like Palantir. Last year Ron Paul received over $2.5 million in donations from his biggest single donor... Palantir’s Peter Thiel)

Pick any even moderately prolific Valley investor, and I’ll show you in three degrees of Kevin Bacon how they back -- and profit from -- at least one company that works closely with the CIA to spy on us. And why not? The CIA is not the only one interested in “big data” – the collection and analysis of huge amounts of information which can be filtered and analyzed to tell us everything there is to know about everyone on earth.

Big data is a nerd’s dream: turning human behavior into measurable, understandable graphs, in the same way the big data experts at Netflix claim they can tell viewers who enjoyed “Sneakers” whether they’ll also enjoy “Enemy of the State.” And who has access to more big data than the federal government? Can you really blame the folks at Palantir or Cloudera or Prism Skylabs from getting wet around the lips at the idea of getting into America’s phone records or every instant message we’ve ever sent. Think of all the patterns! Imagine the possibilities! And also: ka-ching!

And therein lies the truth, and the hypocrisy, of Silicon Valley’s outrage over government snooping: The only people who love big data more, and who care about our privacy less, than the NSA are the outraged Libertarians of Silicon Valley.

Sure, they’re furious when they’re the ones being spied on, but when a company comes to pitch them a piece of software that will see and analyze our every thought, hope, and dream -- well, sign me up boy! This shit is super awesome! And if the CIA wants to throw in a few million dollars, in exchange for being able to use that technology to read our emails or watch us from the heavens well... we’re just investing in tools. It’s really not our problem what the evil government does with them. It’s not us doing the spying, ferchristsake – we have a chief privacy officer... and... hell, software doesn’t spy on people, the NSA spies on people. And... and... look over there! Is Mark Zuckerberg really building a drop box for the feds? Can you believe that guy?

This article was originally published on NSFWCORP. Subscribe now.