What the data reveals about how to make SaaS secret sauce

Life would be much easier if a great product was the only requirement for a great business. Of course, talk to any vineyard owner or long-time New York Times shareholder and they can attest that this is not the case.

Software as a service companies are no different. As challenging as it is to build great software someone is willing to buy, other pieces must fall into place for success.

In SaaS, three critical pieces that must fall in place to create long-term value are price, customer acquisition cost, and churn. You need a sustainable mix of what customers will pay for your product, how much it costs to acquire customers, and how long you can keep them.

That these factors are important and should be tended to is not headline news for an experienced enterprise entrepreneur. However, two things complicate this task: a) These factors do not operate in isolation, rather, they pull and drag on one another, and b) it’s almost impossible to know these inputs for your business with a high degree of certainty in the early going.

In an effort to make the task marginally easier, particularly for new entrepreneurs, I pulled together and analyzed data on these key metrics to tease out how they influence one another; what success and failure look like given different profiles of SaaS companies; and where opportunities for leverage may be.

Of the three factors, price is usually the most alluring for an entrepreneur, so it seems like a natural place to begin looking at tradeoffs. “Hey Cleatus, what do ya reckon we can charge for this here software?”

Enterprise SaaS can range in price from $8 software for creating wireframes to multi-million dollar CRM contracts. (For this reason, SaaS is almost a uselessly broad term.) This greatly changes how the businesses will operate, particularly from a distribution perspective, because price and distribution channel are inextricably linked, as you can see in the chart below. 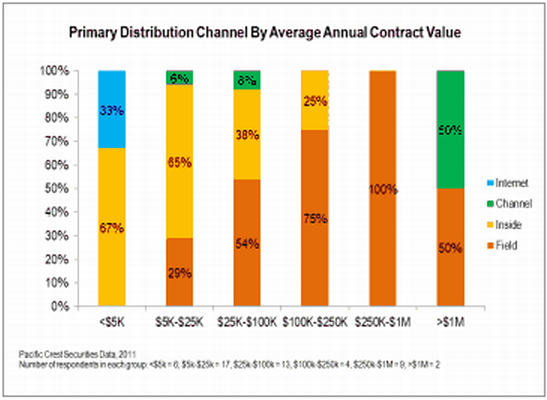 The data set is a few years old, but clearly shows that customers plunking down big bucks for software want to deal with people, and thus web distribution is generally confined to lower-priced software.

Theoretically, SaaS software should be less expensive because it can be deployed at the push of a button (instead of rolled out through long, expensive installations) or printed on CDs and shipped across the country. Yet often it’s quite expensive. What gives?

What gives is that most enterprise software is still sold by humans, even at the sub-$5,000 per year level, and unlike Milton from Office Space, these humans ask for paychecks with benefits. Great enterprise sales people are expensive, and rightly so.

This helps explain why sales and marketing expense as a percentage of revenue for the 21 SaaS businesses listed below was 47 percent in the three years preceding their IPOs -- nearly half of topline. 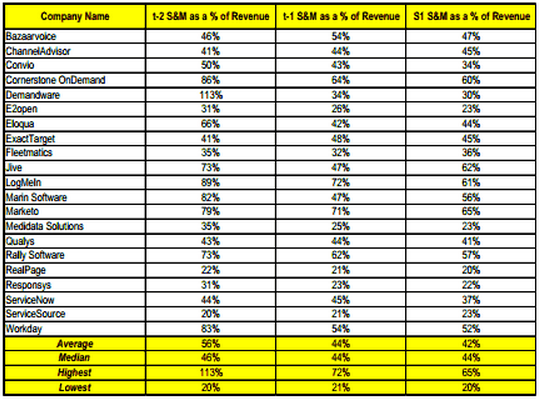 It’s also why the set of 11 mature SaaS companies below spent 38 percent of revenue on sales and marketing last year. Unbelievably, this figure was dragged down by SAP and Oracle who spent a combined $11 billion -- and presumably not by mailing sacks of gold bullion to sales leads. 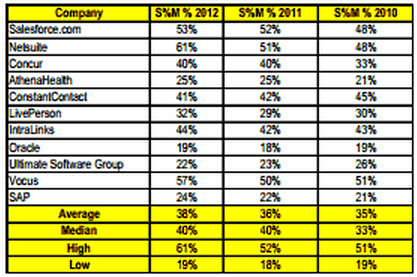 What’s interesting about the cost of distribution is not simply that sales people are expensive, it’s that, as David Skok from Matrix Partners has pointed out, the cost of distribution increases non-linearly as you progress along the spectrum of SaaS distribution channels (depicted at the highest possible level below). Operating an inside sales team is significantly more expensive than distributing through the web, and managing a big field sales team is significantly more expensive than an inside field sales team. Field sales people are more experienced, requiring higher salaries, and may incur travel and expense costs depending on the coverage model.

The costs also increase on a marginal basis. The chart below shows the median cost of an additional $1 in annual contract value by distribution channel based on data collected by Pacific Crest Securities. There is a staggering 100 percent increase in customer acquisition costs between Web distribution and Inside Sales. 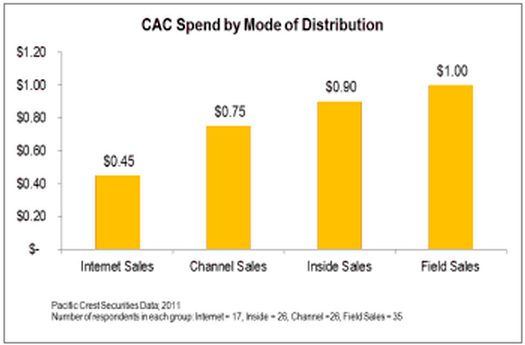 The dynamic of large increases in cost from one available channel to the next presents especially big challenges (or opportunities) for the SaaS businesses whose pricing makes it unclear what distribution channel should be used. For example, can you figure out a way to use an efficient inside sales operation to sell $25,000 software, or are you forced to pay a team of field sales reps to fly around taking prospects out for steak au poivre?

It also creates opportunities for leverage in the rare instances where a SaaS business can distribute using channels below the competition from a cost standpoint. Examples of this are Atlassian’s lack of a sales force, Dropbox’s viral customer referrals and Yammer’s “Trojan Horse” strategy. However, it’s important to note that these tactics are far from universally applicable. It’s also not clear they change the long-term economics of these businesses.

Price is not only connected to customer acquisition cost, it’s also closely linked with the third factor: churn.

Churn, which is a measure of how many customers, contracts, or dollars under contract a business loses for a period, is the flip side of renewal rate -- how much is retained. It’s perhaps less sexy than price, but no less important due to the recurring revenue nature of SaaS.

To understand just how significant churn is for a SaaS business, the sensitivity analyses below shows that the difference between 3 percent churn and 5 percent churn is 66 percent in customer lifetime value.

The link between price and churn is that lower-priced software has significantly higher churn rates, on average, than higher priced software.

This is due to a number of factors. For one, as price goes up software tends to have higher switching costs and longer contracts. Price also dictates the service model. Higher-priced software can support a high-touch model with account managers and customer success teams charged with proactively retaining customers, and even upselling them. 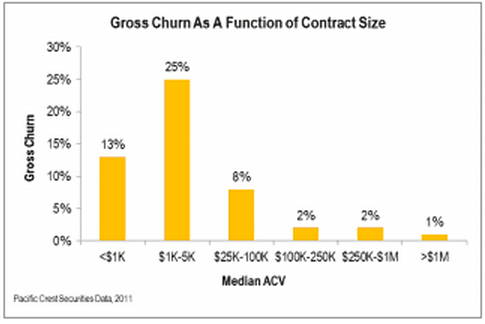 While the data above may not be perfect (there’s no $5,000 to $25,000 range), it aligns with what little data I could scrape together on public SaaS company churn. (Public SaaS companies are generally cagey about sharing this.)

For example at the high end, ServiceNow had an average contract value of $198,000 in 2012 and contract renewal rates of 96 percent to 98 percent. Demandware had an average revenue per customer in Q1 2013 of $400,000 and an “annual total customer churn count” of less than 5 percent. Conversely, lower priced SaaS products from Intuit (payroll solutions), LogMeIn and Carbonite have renewal rates in the low-and-mid 80s.

The difference between 2-to-3 percent churn and 20 percent is immense. 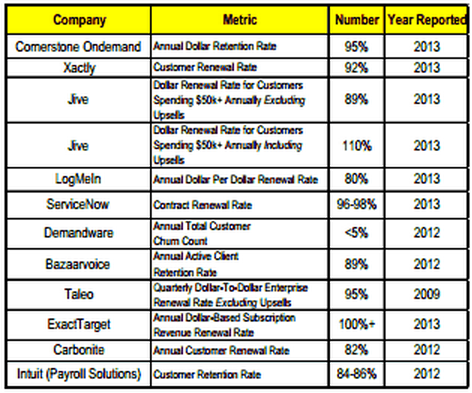 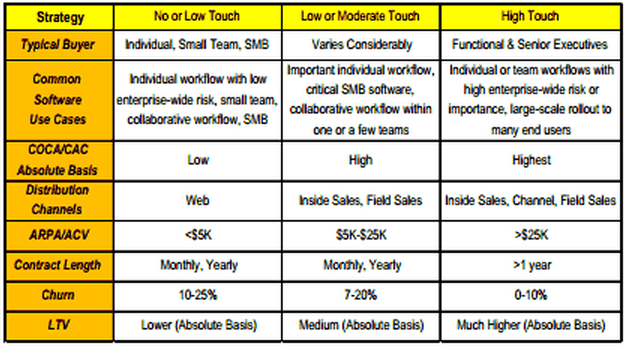 On one extreme are high-priced, high-touch SaaS products such as Salesforce.com, Workday or Netsuite. These businesses have very high average contract values and extremely low churn rates. In fact, very often on a dollar-for-dollar basis they renew at greater than 100 percent due to upselling. A major challenge for these companies is the management side of building a high-performing field sales team and establishing an efficient sales process. At an early stage, before reps have moved along the sales maturity curve and a sales process has been established, the costs are incredibly high.

On the other extreme are low-touch, low-priced SaaS products such as Basecamp, Balsamiq and MailChimp. These businesses acquire customers primarily through the web, so customer acquisition cost is much lower and less fixed. On the flip side, average contract value is small and churn can be quite high. A challenge for these businesses is the substantial number of customers needed to reach scale given these economics.

In the middle are a host of software companies – some are the enterprise-level of the low-end, others may be the lowest priced products competing at the high-end.

These businesses typically end up using inside sales for distribution, which is far more expensive than web distribution, while at the same time experiencing higher churn than the high-end SaaS businesses. These factors squeeze the middle, making success a more delicate balancing act. The challenge of managing this balancing act is exacerbated at an early stage when none of the inputs can be known with certainty.

This is not to say a business of this type can’t be successful. Many are. One common strategy is to begin in this range during market entry and move upstream. Another is to use aggressive inbound marketing to make the inside sales team more efficient, lowering customer acquisition cost.

The reality is that it’s possible to create value using any of these strategies -- and others.

When this happens, it’s time to unscrew the gasoline cap and douse the bonfire.

This is the situation you see in the chart below for 21 SaaS businesses in the two years preceding their IPOs. Generally the more they invest in distribution the faster they grow. They found the right mix and are letting it rip. 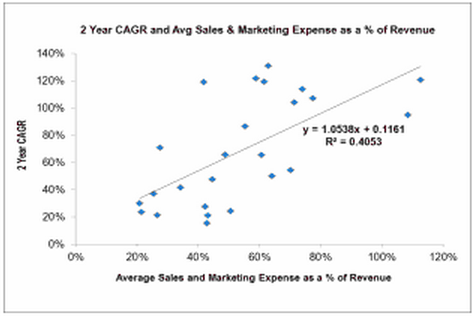 Again, while there are many recipes for success -- combinations of price, customer acquisition cost and churn that create value -- and it’s often difficult to place hard numbers on the inputs early on, it’s important to have a strong theory of what success looks like on these metrics to serve as a guideposts and targets.

After all, a great product with paying customers is a start, but it’s just a start. It’s sort of like the classic Mitch Hedberg joke: “They say the recipe for Sprite is lemon and lime but I tried to make it at home and there’s more to it than that.“