The Mad Video launches on Vimeo and Brightcove, making more moments into "tags"

Remember the early 2000s? In some ways it was a simpler time. Not like early Web days, when a webpage could take a half-hour to load through a 2400-baud modem over a creaky fax line. Instead, I'm talking about the Internet that followed, the post dotcom bubble bursting era, which saw the emergence of Web 2.0. Like you see something funny (or perhaps do something funny), have some worthy commentary to offer, and make a YouTube video. If it's funny enough, lots of people will watch. Around this sprouted a simple, non-monetized online commodity.

Things, of course, change, and now YouTube has commercials, and most videos are trying to sell something, or, at the least, attempting to monopolize your attention by having you click its links. In short, monetizing online videos has grown into something real.

There are a bunch of companies out there trying to bolster this monetization process. One such startup is The Mad Video. The joint Madrid-San Francisco project provides a way to add secondary content to online videos in a more nonintrusive fashion. It's been getting buzz, too, as it was awarded the Hottest Showcasing Startup reader's choice at Tech Cocktails' San Francisco mixer last month. Today, the company is announcing its launch on both the Vimeo and Brightcove platforms, meaning video makers are beginning to catch on.

The Mad Video provides an easy platform for video-makers to embed secondary content in the form of buttons. Mad Video CEO Koldo Garcia explains, "It's very hard to reach this content in context." The Mad Video creates context by placing opaque, visually appealing buttons that can link to secondary information, such as links to pages, Facebook or Twitter tags, images, etc. Users can click them if they want (and the video will pause), or they continue on their merry way without being annoyed by the buttons' existence. 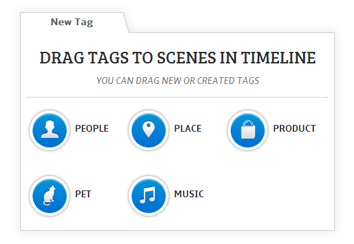 The company claims numerous use-cases (some more interesting than others), but here are two to give it some context: Let's say you're a fashion blogger producing a video to review a new line of shoes. Instead of just talking about the products, and having their info listed in the body text below the video, the Mad Video allows you to embed an clickable links that lead to more information about each product.

In the world of non-commodities, let's say you have a video of someone doing some intense skateboarding feats (which company does have on their front page). The Mad Video allows you to link to information about who is skateboarding, where each scene takes place, and any other information that may be germane to the content shown.

In this case it's kind of like a second screen embedded on the first screen.

The company uses these tags to archive the video in terms of moments. Each new tag represents a different moment in the video, making it easier for users to catalog and segment portions of their movies. Tags are then listed in an external gallery, making it easy to see what's been tagged and where it came from. So in addition to providing a way to link out to external content, the Mad Video also presents a new and different way for users to archive their videos. 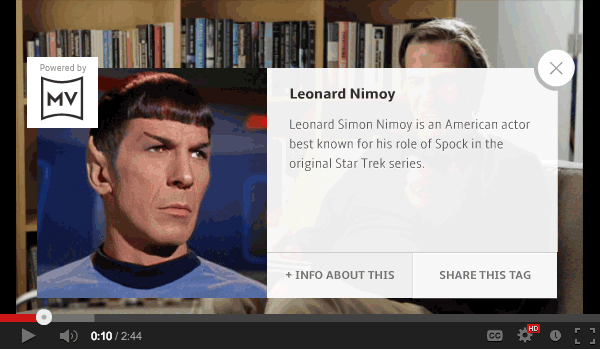 The Mad Video, of course, is not the only company offering this type of service. Others include Viewbix, Clickthrough, and LinkedTube. Most of these, in my opinion, are pesky and generally make me hate life. This is because their content are those YouTube "click-me's," that you have to ever-so-gently click the "x" to get rid of it in order to see the entire video screen of what you were originally watching. And if you click in the wrong part of the ad (not that tiny "x" at the corner), you are instantly linked to some unknown advertisement and hate your life even more.

The Mad Video isn't really doing this. Or, if it is, it's a classier version. Riley Maguire, the startup's COO, explains, "We're all about nonintrusivity and getting information to people who want it."

This expansion to Vimeo and Brightcove shows that others are catching on to the Mad Video's service. With these two powerhouses in conjunction with YouTube, pretty much any video maker can use its service, and let's hope they do so in creative ways.

I, personally, am more interested in how Vimeo users will adopt this tool, since Vimeo is a site replete with new and innovative video content. People generally don't browse its videos scouring for advertisements. And its users aren't seeking ways to explicitly monetize goods. Instead, it's a much more subtle and artistic video platform, and I'll be interested to know if and how its users adopt the Mad Video.

In the end, it's always content that trumps style. The Mad Video claims to offer both, so perhaps we'll be seeing it implemented in more videos in the future. As long as it sticks to its goal of remaining unobtrusive and geared toward interactive content, then it may be a truly unique product.