A display at Qwiki's celebration party this week

Of course. By the time I get around to writing about a recent Yahoo acquisition, the company announces another deal.

I'm going to write about Yahoo's second-latest acquisition anyways, because Qwiki, the acquiree, is a New York company, and because I've covered it before and have some thoughts. Yahoo's plans to acquire Qwiki were reported a few weeks ago but the companies made it official Wednesday, hours before a celebration party at the Standard Hotel. Yahoo has purchased the TechCrunch Disrupt-winning, coast-hopping, pivot machine for a reported $50 million.

It would be a struggle not to react with snark to the news. At a $50 million price tag, Qwiki is the second-most expensive of Marissa Mayer's 17 deals at Yahoo. The biggest is of course was for Tumblr. Today's deal for Xobni is reported to be between $30 million and $60 million. Yahoo has between two and five more signed deals waiting to be announced, a person familiar with the company said. 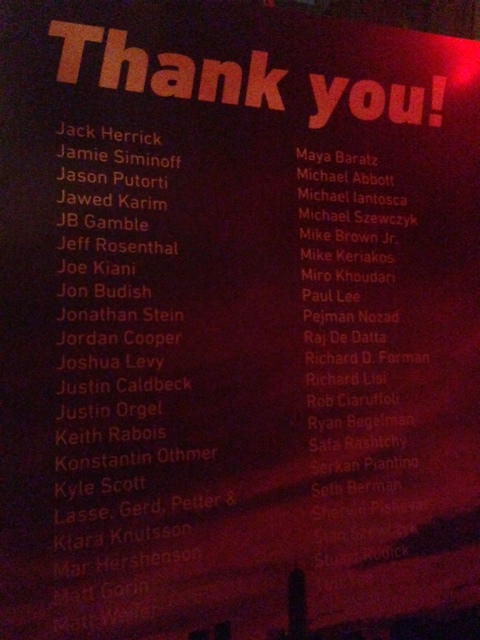 Qwiki is an easy target for criticism because, compared with Yahoo's typical target profile, the company is older, with a bigger team and more funding from well-known investors ($10.5 million total). It built a product that no one really used -- initial reports said it had over 100,000 downloads in its first week of launching; my understanding is that engagement never rose much higher. Beyond that, Qwiki had moved across the country twice and pivoted three times, the last time deciding to actually turn down revenue to go for a money-losing consumer play. Yahoo essentially paid $50 million for nine employees and a product. In another twist for Yahoo, the company announced it won't kill off Qwiki as it has with most of its acquisitions.

After numerous conversations about the deal, I've heard every possible theory tossed out as to why Yahoo would want to pay such a high price for Qwiki. It's a play for mobile developers in New York. It's a reaction to Vine and Instagram's new video product. It's a testament to the company's strong connections. Mayer is simply looking for warm bodies.

The one thing I can say definitively is that, if your startup isn't working out and you want to sell, stop taking revenue immediately. It worked for Qwiki. Just six months ago, before its relaunch as a consumer-facing app, Qwiki had built B2B platform for video editing that ABC News, Yahoo and Time Inc. were paying to use. The company decided to turn down that revenue and pivot to a consumer-facing video platform that basically competed with Vine. Here's how Qwiki sold that idea at the time:

Once it builds scale with users, Qwiki could become a branding platform with native ads in the same way Facebook, Twitter, Tumblr and StumbleUpon do. Selling brands on branded Qwikis might be easier than, say, Promoted Tweets, considering how much a Qwiki resembles a traditional 30-second spot.

I also noted that that plan was an example of some Silicon Valley-style irrationality:

Now they’ve brought that irrationality back to New York, amid a sea of business-minded, revenue-focused companies. Their plan to enter a crowded space with a money-losing, consumer-facing app while such a thing is entirely out of vogue with investors is irrational and risky.

What I didn't realize is that the plan could also get the company a Silicon Valley-style exit. I was reminded today of the saying "Nothing ruins a good story like numbers." As we saw with SnapChat, a valuation based on incalculable potential is much higher than a valuation based on actual revenue. When there is income, a company has to negotiate deal value based on a multiple of that revenue. When there is no income, negotiations can be based on whatever the hell someone makes up. In Qwiki's case, the $50 million number could have come from Qwiki's potential to catch Yahoo up on the social video trend which Instagram/Facebook and Vine/Twitter are clearly leading. It's difficult to pinpoint exactly what that's worth.

Sometime around acqui-hire number seven, I asked what Mayer was really getting out of all of these deals. Franken-Yahoo surely can't add up to more than the sum of its parts.

There are plenty of metaphors to make: Sarah Lacy suggested Yahoo is acting like a hoarder at a garage sale who buys anything they see that they even sorta like because it's a bargain. But that's not the case with Qwiki (or her most-criticized deal for Summly). Nathaniel Mott suggested she was like a "Mother Marissa" figure, taking in the poor and weary startups out of charity. Not the case here either -- Qwiki at least had plenty of funds.

What's clear is that Mayer doesn't want to end up with a bunch of crappy, disparate technologies with rich founders who just bide their time before they can leave. As Mark Suster eloquently argued: Most founders stay the least amount of time they can. In the Valley people who've sold their companies into Google have a saying for it: They're taking "some time off." It's considered a comfortable job while they decide what to do next.

I understand most of these Yahoo deals include lock-up periods of a minimum of two years. Qwiki is an older company -- it's been around since 2009, and so not all of its employees are going to stick around that long. So, even in the best case scenario, when the founders become disillusioned and check-out and the projects become neglected, what does Yahoo get? The same thing it had before -- a ton of separate, unrelated apps -- but just more of them.

A turnaround of a large, struggling public company can mean two different things. There's the Apple-style turnaround where the business is fundamentally revived and goes on to innovate and create new markets again. And then there's the AOL-style turnaround, where the stock rebounds because the company sold a bunch of patents. The first is really turning around a business. The latter is turning around a stock.

The question is which one Mayer is truly aiming for. A string of acquisitions that allows her to credibly spin a story that Yahoo has a mobile strategy and more ad inventory sure makes it look like she's taking action. But turning all of these disparate parts and exhausted teams into a turnaround of Yahoo is a lot harder to imagine.