VCs on the future of VC

Last month, at Pandomonthly in New York, Fred Wilson offered a surprising answer to our standard penultimate question, "What is one thing you believe that no one else does?"

His answer? That venture capital as we know it won't be around in ten years.

Wilson followers may not have been as surprised as I was -- he's touched on this topic before.

And he's not totally alone in that thought. In February, Josh Kopelman of First Round Venture Capital asked why venture capital, the industry that funds innovation, is so very un-innovative itself. “There are many firms where I’d say their single greatest innovation over the last 20 years was raising carried interest from 20 percent to 30 percent," he said. He's been trying to evolve the idea of what a VC is at his firm by creating an community among his portfolio companies. The idea is that as the portfolio grows, the overall knowledge of the community increases, rather than have the investors be the sole keepers and distributors of knowledge.

So from New York, Wilson has declared venture capital was doomed; Kopelman has similarly predicted its evolution. Just a day prior to Wilson's comments, across the country in Silicon Valley, Mark Siegel of Menlo Ventures argued that venture capital is about to enter its best era yet.

In a presentation at the IBF Venture Capital Investing Conference, Siegel noted that the venture capital landscape is the smallest it has been since the mid-90's, right-sized from 1000 firms in the year 2000 to around 200 today. That creates an opportunity for VC firms, he argues, since, as reflected in this chart, the ratio of venture backed exits to venture commitments is improving. This could mean VCs invest in fewer duds; it could also be attributed to the increase in soft landings and acqui-hires for failed companies. 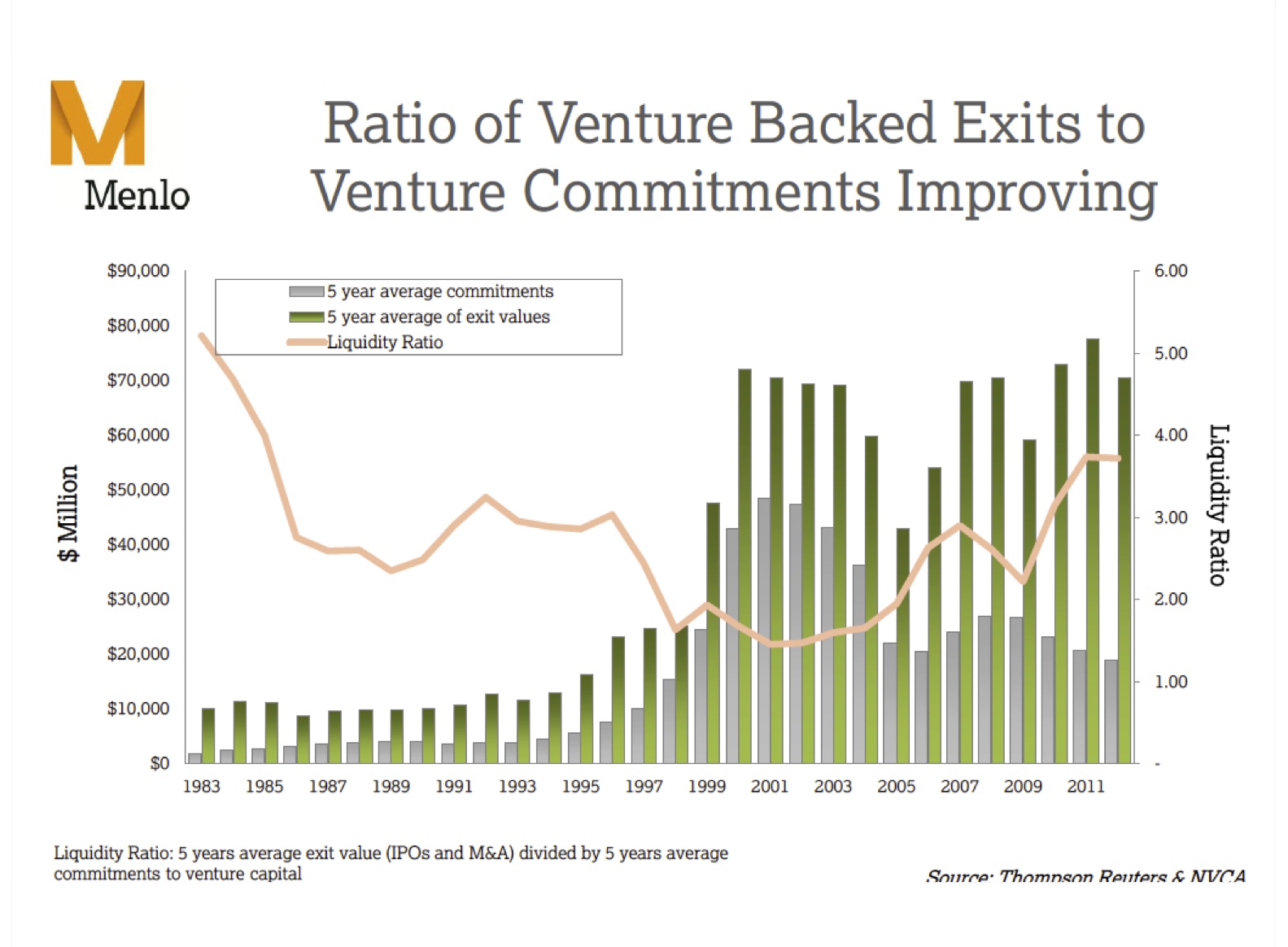 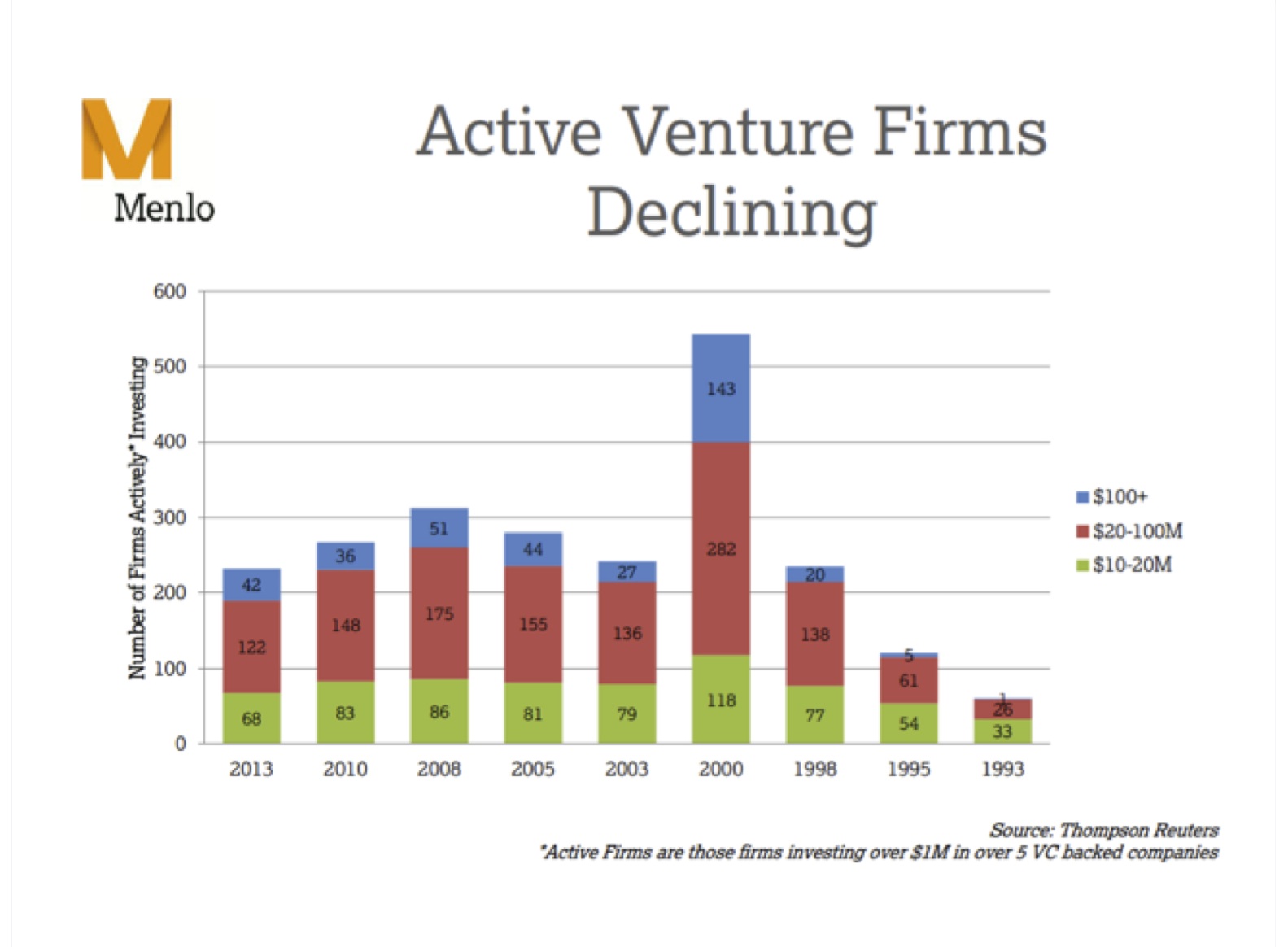 We know that as an overall asset class, VC returns have been lousy, as highlighted by Kauffman Foundation's not-so-fruitful track record of venture returns released last year. Turns out the Kauffman Foundation isn't alone in that situation -- limited partners in VC funds have been expressing their frustrations (albeit less publicly) ever since. Venture capital is still waiting for another phenomenon as revolutionary as the Internet to come along and make everyone rich. Nanotech, and then cleantech, and the social media, have all been promised as The Next Internet. Except they haven't been.

But Siegel argues the numbers look rosy for venture capital. He predicts trillions of dollars in market value being created in the next decade by VC-backed companies, driven by mobile, social, the cloud and big data. These four categories are becoming table-stakes for any company -- not just tech -- to understand and embrace.

Beyond that, today companies wait longer than ever to IPO. (Companies like Etsy, SurveyMonkey and Kickstarter would prefer to avoid such a fate altogether.) Because of that, 80 percent of value is created in the private sector, prior to the IPO, as shown in this chart. He's arguing that investors can't afford to miss private sector growth because all the value is extracted by the time these companies hit the public stock market. 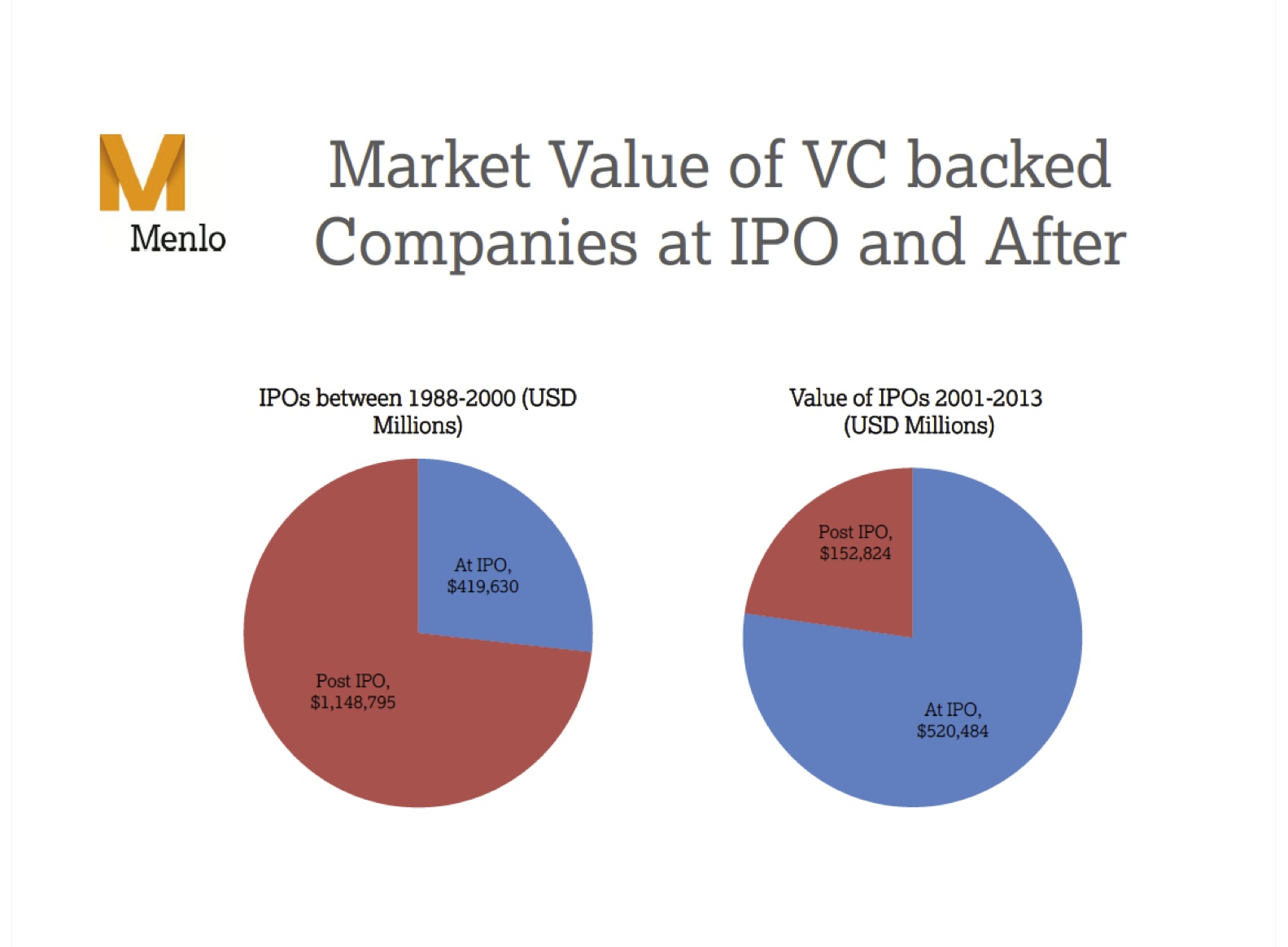 Based on the acceleration of growth in the tech sector, Siegel estimates that tech companies will create $3 trillion worth of new market value over the next ten years. With an estimated average IRR of 15 percent, that means $450 billion worth of returns to VCs by his estimates.

Siegel, Kopelman and Wilson may not be completely at odds, they're just taking a different approach to delivering a similar message. Siegel's is an appeal to LPs who are feeling increasingly skeptical of venture capital as an asset class. Wilson and Kopelman's is an appeal to founders who can build companies for cheaper than ever before and may be equally as skeptical of venture capitalists.

From the founder's perspective, money is becoming a commodity -- I hear investors frequently say good founders can raise from whoever they want. Naval Ravikant, founder of AngelList (an investment platform which basically cuts out venture capital middlemen), has proclaimed that there is no such thing as proprietary deal flow anymore.

Meanwhile Bill Draper, one of the Valley's earliest investors, has argued the opposite of Siegel's claims: he believes there are more VCs chasing fewer deals, which makes the market riskier for venture investors and less risky for entrepreneurs. He predicted that, because of this, returns will stay low for firms in Silicon Valley. That doesn't mean VC is going to go away entirely. One thing every VC will agree on is that venture capital, like every industry in the world, will spend many years adjusting to disruption.