One year in, Yahoo employees and shareholders are on Team Marissa

Marissa Mayer's now been leading Yahoo for a full year. In that time, she's made an insane 17 acquisitions, decreased headcount by 1000 employees, killed 12 products and relaunched several others. She also sparked an overblown techochamber debate about distributed workforces by asking employees to actually come into the office. Oh, and she had a baby.

At the very least, you can't call her first year boring.

I've questioned Mayer's aggressive acquisition strategy, asking what it all adds up to, whether a bunch of acqui-hires will ultimately contribute much to the turnaround of Yahoo as a company. Certainly big bold moves can help turn around a company's stock. But we know from experience that talent won't stick around forever. There's no guarantee that a short-term stock boost will turn around the company.

Regardless of what those of us in the techochamber think of Mayer's strategy, shareholders are loving it (for now anyway). Yahoo's stock is up 70 percent in the last year.

Yahoo's employees are on Team Marissa, too, according to new stats released by Glassdoor.

Mayer has an 85 percent cumulative CEO approval rating among its employees, the site reports. That figure is based on Glassdoor reviews from 179 Yahoo employees. It's better than, say, the President (46 percent). It's also better than the global average of Glassdoor's database of 250,000 companies (69 percent). And it's sure as hell better than past Yahoo CEOs -- Jerry Yang left with a 26 percent approval rating. 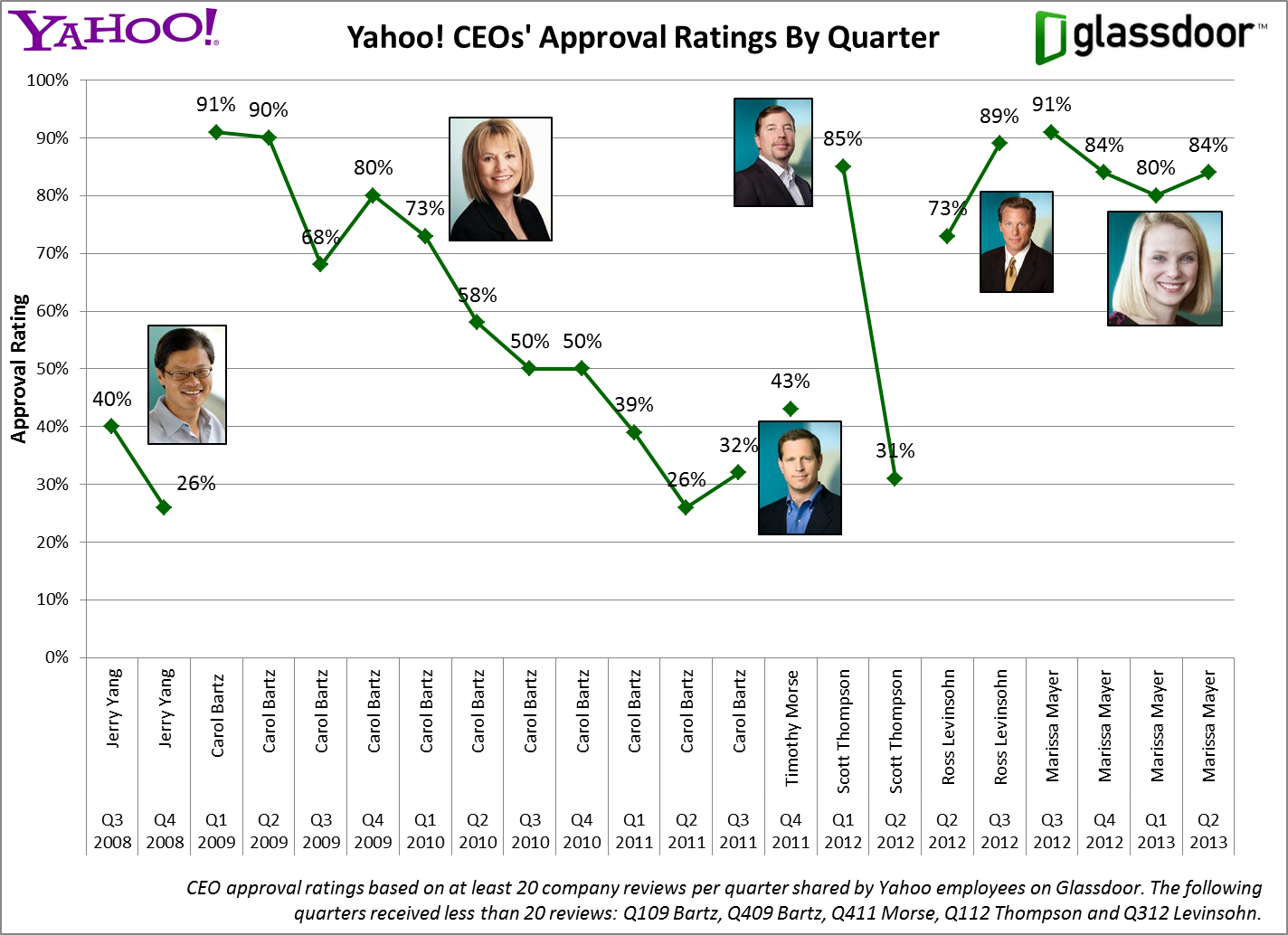 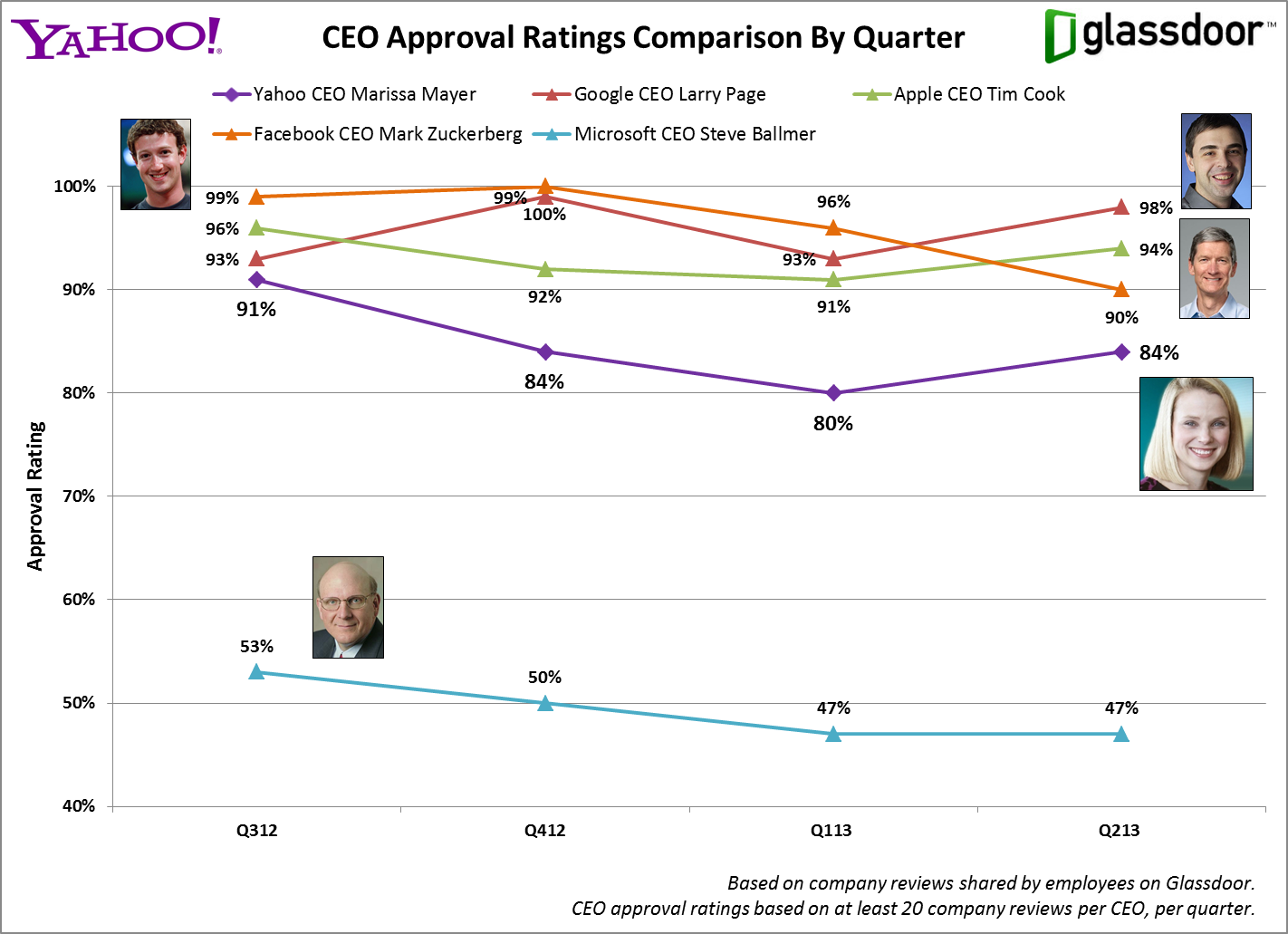 She is beating Yahoo's past choices for CEO on employee and job satisfaction, which continues to grow. Under Mayer, job and employee satisfaction has been a 3.7 (on a scale of 1 to 5), which is higher than that of Carol Bartz (3.2) and Scott Thomson (3.4). 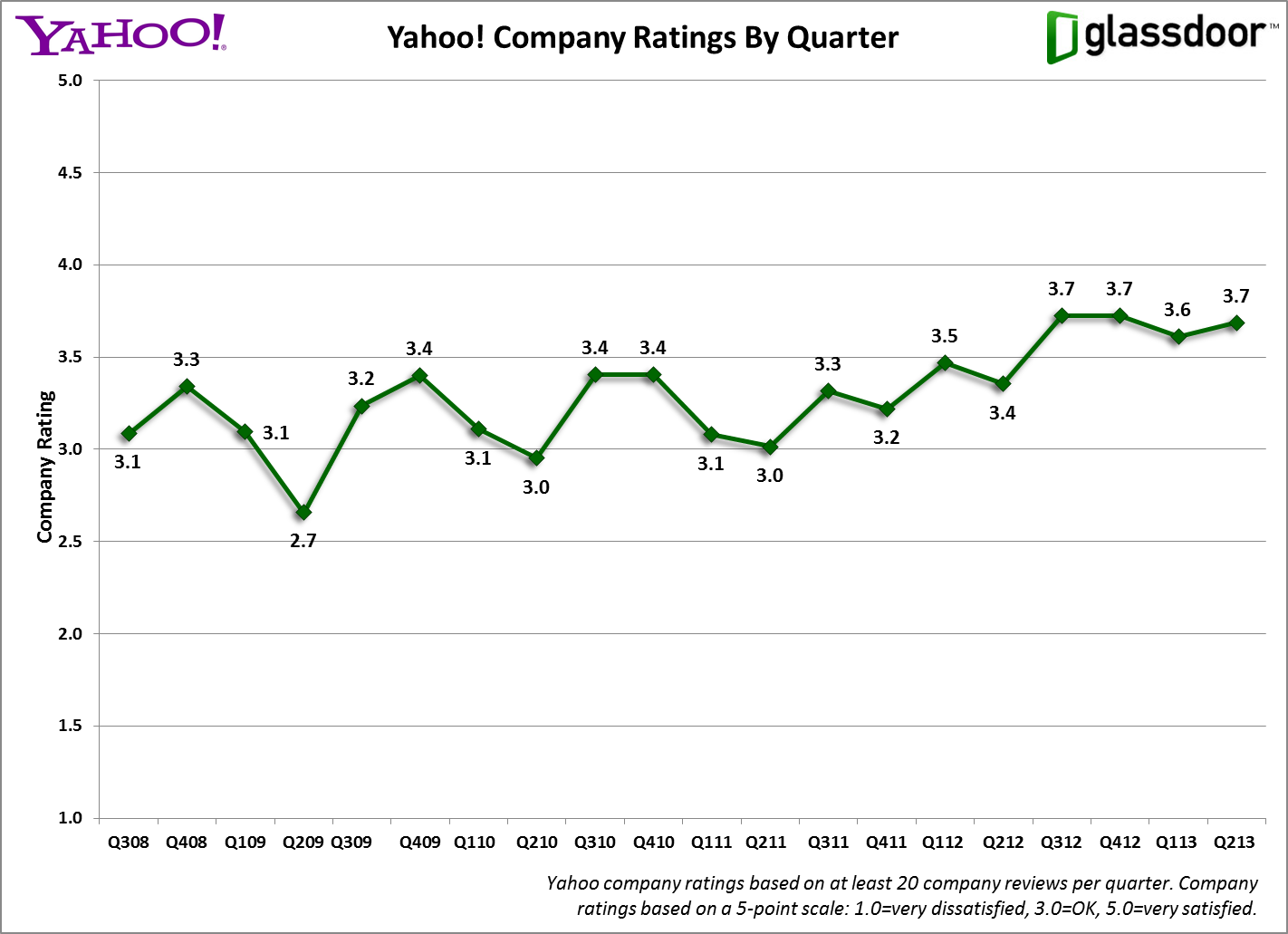 One more datapoint: Time to hire at Yahoo is taking longer, stretching from an average of eight days to 22 days. I imagine that doesn't take acqui-hires into account, though it should. I think that may be the only way Yahoo is hiring these days, and it certainly takes longer to acquire a company of three than it does to hire three independent people. But in all seriousness, the longer time to hire is most likely a function of Mayer's rigorous hiring process, in which she personally interviews each candidate.

Employees on Glassdoor report Mayer's early cultural changes (such as getting rid of company-mandated Blackberries, bringing in free food, and cutting dead weight through attrition), have helped to rid the company of "soul-crushing dysfunction."

Another manager said that Yahoo "is operating with a sense of vision and urgency that hasn't been seen since its very early days." Mayer's moves as a first-year CEO may be controversial to some, but she's won over her two most important constituents -- shareholders and employees.