When awe.sm began four years ago, it was a social marketing analytics platform geared toward developers. The company has licensed APIs that powered the consumer-facing dashboards of over 200 media company clients, including Maker Studio, Topspin Media, LocalResponse, Say Media, and StockTwits among others. Today, awe.sm is announcing an addition to its offering in the form of its own consumer-facing product targeting brands and agencies.

The new “awe.sm for marketers” has been in private beta for several months and was developed in cooperation with social marketing teams at BMW USA, HP, and Home Goods, with participating in its pilot program. The goal of the new product is to help direct marketers measure the ROI of their social campaigns, not in terms of typical second-order, vanity metrics like reach and engagement, but rather in terms of first-order business fundamental such as traffic, conversions, and ultimately, revenue.

In addition, awe.sm for marketers tracks who engages with a brand’s posts and how that engagement drives KPIs, thereby identifying their most valuable followers. Combined with the above ROI analysis, the company calls this “tracking the full funnel – from reach to revenue.”

In explaining the need for such a product, Awe.sm co-founder Jonathan Strauss references a 2012 social marketing whitepaper by Adobe which concluded that, “88 percent [of survey respondents] indicated dissatisfaction with social measurement effectiveness, [while] 52 percent cited difficulties in accurately measuring ROI as their biggest source of frustration in social marketing.”

“Previously this category was more art than science,” Strauss says. “People were following axioms like ‘you have to tweet a minimum of three to five times per day, and more pictures is better.’ But none of this was based in actual hard data and a one-size-fits-all approach doesn’t work across all audiences.” 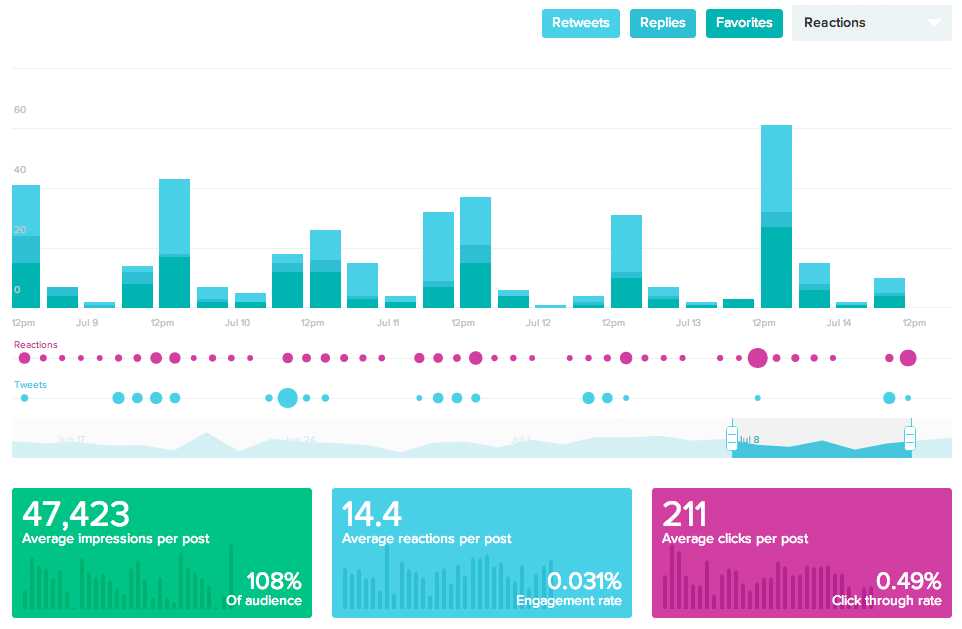 According to Strauss, the failure of existing social analytics tools has been their inability to offer attribution and conversion tracking. It’s not enough to simply know retweet, like, or reply counts, he argues. Companies must instead measure and base business decisions off data about which campaigns drove sales and at what conversion rates.

UpFront Ventures General Partner and awe.sm board member Mark Suster is so confident in the new product that he’s putting the company’s and his firm’s money on the line. “If you’re tired of flying blind on social, then try awe.sm,” he says. “We’ll refund you if you find a tool that does the job better.”

Awe.sm for marketers is available to the public today, but will be sold through a high touch sales process, beginning with a request-to-demo, rather than self serve. The product is priced on a SaaS model based on the number of social accounts monitored and size of audience that a marketer wants to monitor. The company’s developer platform, by contrast, is priced according to usage volume.

Rather than focusing on competition from other third-parties, Strauss predicts his company’s greatest competition will comefrom Facebook Analytics and Twitter Insights, although only by virtue of the fact that they are owned and promoted by the social networks themselves. By contrast, he views social analytics startups like GraphEffect, Adaptly, and SocialWire as complementary, given that they focus mostly on paid marketing, while awe.sm emphasizes owned media.

The company is in the process of building out its inside sales team and that presents perhaps the biggest challenge ahead. Awe.sm built its new marketer product based on inbound demand and customer feedback, but none of that prepares the company to go out and close SaaS licenses. If the company can mature in this capacity to match its success on the product side of the house, then it will be in a great position. But as always, it will all come down to execution.

There’s no denying the growing importance of social marketing for brands and the agencies that represent them. As budgets increase and these marketers seek to maximize the impact of their efforts, data becomes of paramount importance. More importantly, first-order data like conversion rates are the only effective way to measure ROI. This type of data has long been available for other digital marketing channels, but is only coming to bear in social media.